(PART V)
Today
RACE & CASTE IN THIND
Whose Struggles Are Ours?

In 1930, a South Asian immigrant published a vicious letter in The Chicago Defender, penned under the name K. Romola, dismissing any possible solidarity between African Americans and South Asians: "Too much has been written by the Negro papers, magazines, and fourth rate writers like Du Bois, about the darker races," he wrote, "but who in the hell wants to join the caravan with the black ones? Our caste system in India excludes those who do not belong to the Aryan (white) race and we even here exclude any Indians who live and socialize with the Negro."

Hucheshwar Gurusidha Mudgal, a South Asian immigrant living in Harlem, wrote a scathing and ferocious response, describing his fellow Indian as an "out of touch" snob and self-hating "victim of the white propagandists." Romola had "utterly forgotten the political, social, and economical oppression that India has been subjected to under the British," Mudgal responded. 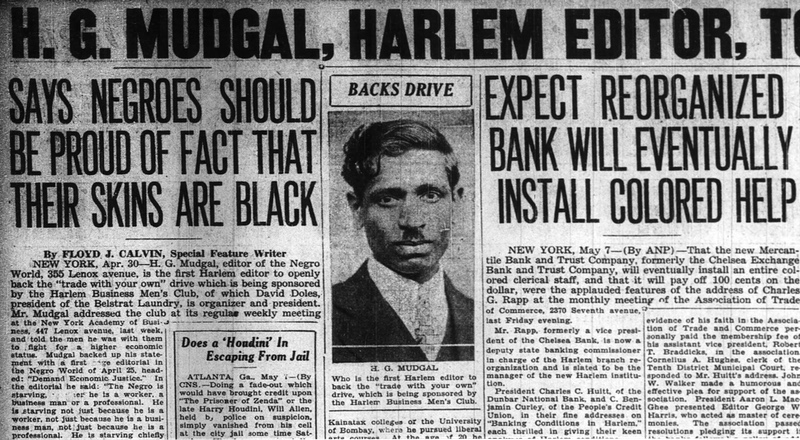 Mudgal's life and political work was deeply invested in Black causes. Born in the city of Hubli, in what is now modern-day Karnataka, Mudgal arrived in New York around 1920. In 1922, he was hired to work for the Daily Negro Times and its successor the Negro World, both mouthpieces for the Pan-Africanist Marcus Garvey and his organization the Universal Negro Improvement Association (UNIA). By May 1930, Mudgal had risen in the ranks, serving as an acting managing editor for the Negro World, a position he held until June 1932. Mudgal's writing often stressed the interconnected nature of the African American struggle and worldwide anti-imperialist movements, including in India.

The question of whose struggles the South Asian American community chooses to identify with has echoed throughout its history. It was also evident seven years prior to Romola and Mudgal's correspondence, in Bhagat Singh Thind's argument to the Supreme Court. In making his case, Thind had argued that he should be allowed to retain his American citizenship because, as a "high caste Hindu of full Indian blood," he actually belong to the "Caucasian race." He was therefore "white," Thind claimed, and thus should be eligible for citizenship.

Thind was following in the logic of Takao Ozawa, a Japanese immigrant, who just a few months earlier had argued before the Supreme Court that his skin was just as white as the average white person, and therefore he too should be allowed to become an American citizen. Like Thind, Ozawa also lost his case in an unanimous decision, because, as Justice George Sutherland concluded: "the term ‘white person'… is confined to persons of the Caucasian Race." And Ozawa, having been born in Japan, was "clearly not a Caucasian." 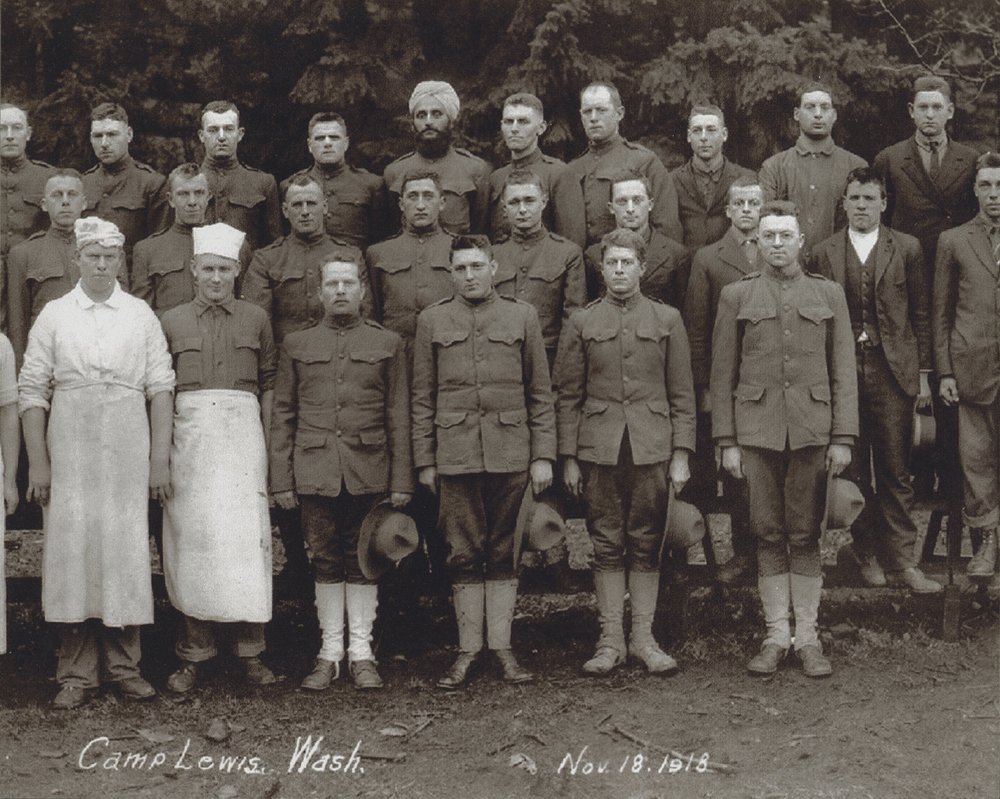 Bhagat Singh Thind with his batallion at Camp Lewis, Washington (1918).

So that is where Thind began his argument, claiming that he was, in fact, "Caucasian," because of the "purity of [his] Aryan blood" which, according to the outcome in the Ozawa decision, should allow him to become a citizen.

In his argument, Thind was attempting to use caste segregation as a way to claim racial purity. At one point, Thind's petition describes how the "high-class Hindu regards the aboriginal Indian Mongoloid in the same manner as the American regards the negro, speaking from a matrimonial standpoint." In his claim to be "white," "Aryan," "Caucasian," "high caste," and "high class," Thind was attempting to disassociate himself from categories that could be understood as non-white. Hence, he contrasts himself with the "aboriginal," "Mongoloid," and "negro," categories that are unmistakably not white. As the scholar Sucheta Mazumdar has argued, such a claim constitutes a "racist response to racism." It was also a casteist response to racism.

The justices again disagreed with Thind. This time because the word "Caucasian" was being used in a way differently from how it would be "interpreted in accordance with the understanding of the common man."

As Ozawa and Thind both learned, there was nothing they could have said to convince the Supreme Court otherwise. The Court was not concerned about scientific analysis or legal arguments, but about the future of the country and what that future looked like. As Sutherland explained further:

"The children of English, French, German, Italian, Scandinavian, and other European parentage, quickly merge into the mass of our population and lose the distinctive hallmarks of their European origin. On the other hand, it cannot be doubted that the children born in this country of Hindu parents would retain indefinitely the clear evidence of their ancestry. It is very far from our thought to suggest the slightest question of racial superiority or inferiority. What we suggest is merely racial difference, and it is of such character and extent that the great body of our people instinctively recognize it and reject the thought of assimilation."

A couple years later, John Mohammad Ali, a South Asian immigrant in Detroit also found himself at the receiving end of the same rejection. Wallace Visscher, the U.S. Attorney in Detroit, became aware that Ali had naturalized as an American citizen in 1921, and began challenging his citizenship in court. Distancing himself from Thind, Ali argued that, even though he was a native of India, his ancestors were Arabians, and based on previous court rulings where Indians claiming to be Afghani and Parsee were eligible for citizenship, he too should be accepted. His ancestors, Ali said, had "been careful not to intermarry with the 'native stock of India'" and he even provided evidence in court linking his genealogy back thirty-one generations to the Prophet Mohammed himself. Ali lost as well, and his citizenship was cancelled by the court. 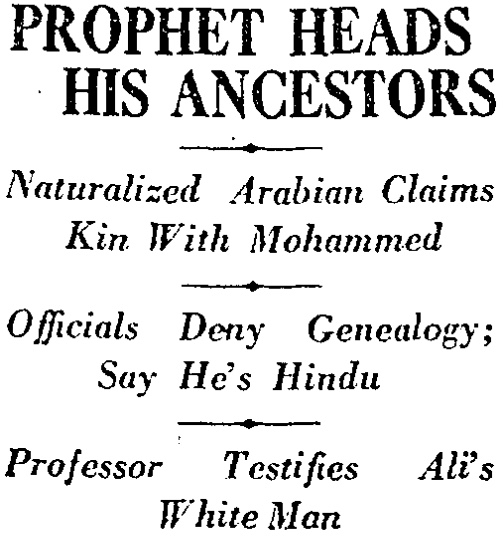 Embedded in both Thind and Ali's arguments was a claim to "racial purity" that seems deeply abhorrent today. While critiquing the exclusionary sentiment of the time, Thind and Ali were simultaneously attempting to exploit existing prejudices that they thought would work in their favor. Thind, for example, was relying on the Court's acceptance of him as a "high caste Hindu," since the systemization of social hierarchy through caste was looked upon fondly in the United States, with some wealthy white men even going as far as calling themselves the "Boston Brahmins."

As the Thind decision teaches us, the strategy of claiming whiteness, or using one's religion, caste, gender, or wealth to appeal for acceptance, is ultimately a losing one. In fact, it was only in the 1960s, in the midst of the Civil Rights era led by Black Americans, that South Asians were finally allowed to enter the United States in larger numbers.

And, like H.G. Mudgal, South Asians worldwide have been drawing inspiration from, and collaborating with Black Americans' fight for freedom and justice for centuries. In 1873, Jotirao Phule, a social reformer in Maharashtra, India began his essay Gulamgiri (Slavery), with a dedication to American abolitionists. And in 1971, a group called the "Dalit Panthers" in India declared in their manifesto: "From the Black Panthers, Black Power was established. We claim a close relationship with this struggle." 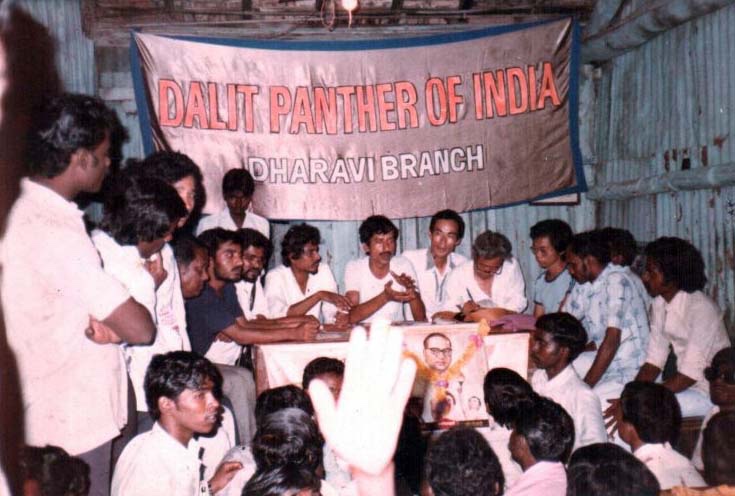 In Part IV of this series, we'll share the immediate aftermath of the Thind decision on the nascent South Asian American community.

You can read more in Tides, our online magazine:
• "H.G. Mudgal, Harlem Editor" by Dr. Manan Desai and Tizarat Gill
• "Measured by a hat: The citizenship struggles of John Mohammad Ali" by Dr. Kritika Agarwal

And to learn more about caste in the Thind argument:
• Doug Coulson, "The Ghadr Party and the Indian Caste Sytem in Thind" in Race, Nation, and Refuge: The Rhetoric of Race in Asian American Citizenship (Albany: SUNY Press, 2017), 45-88
• Equality Labs, "Aspiring to Whiteness through Caste Privilege" in "Caste in the United States: A Survey of Caste Among South Asian Americans" (2018)