The 1923 Supreme Court decision barring South Asians from citizenship was the culmination of decades of anti-South Asian sentiment in the U.S., marked by xenophobic rhetoric, racial violence, and restrictive immigration legislation.

Here’s some background: South Asians began immigrating to the United States in larger numbers nearly 130 years ago, beginning in the late 1800s. These early immigrants were primarily Sikh men from the Punjab region of British India, who mostly settled in the western parts of the United States (California, Oregon, and Washington) and western Canada (British Columbia). For the most part they worked as laborers, on farms, fields, lumberyards, and mills.

There were smaller numbers of South Asians who came to the United States as students, pursuing their education at universities across the country — and a handful of others, who came as merchants, religious leaders, travelers, or for other purposes. There was also an early wave of Bengali Muslims, first peddlers who settled in port cities like New Orleans, and later lascars (ship workers), intermarrying into Black and Puerto Rican communities in New York, Baltimore, and elsewhere. This early population consisted almost exclusively of men, because restrictive immigration policy made it nearly impossible for South Asian women to immigrate to the U.S. There were a small number of exceptions however, like Anandibai Joshee, who completed her medical degree in Philadelphia in 1886, and Kala Bagai, who arrived in San Francisco in 1915 with her husband and three sons.

The harsh reality that these early immigrants faced was one of overt racism and xenophobia. A newspaper headline from the San Francisco Call in 1906 gives a sense of the sentiment in the country at that time: "Our First Invasion by Hindus and Mohammedans," it declared. 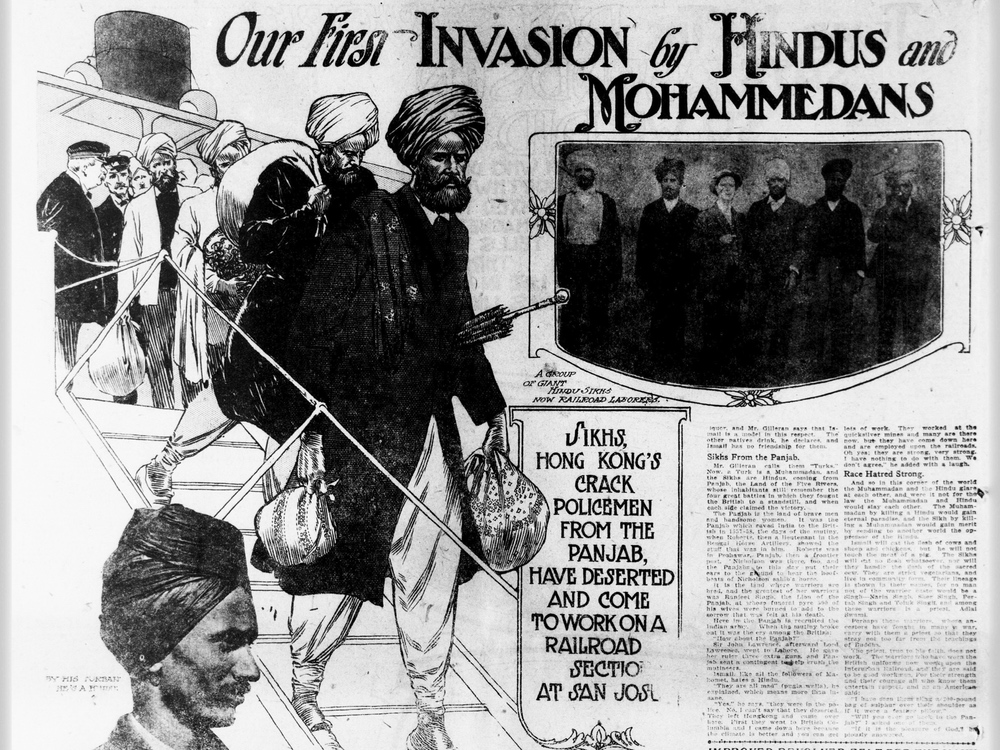 And another, from the lumber town of Bellingham, Washington on September 16, 1906: "Have We A Dusky Peril? Hindu Hordes Invading The State," it proclaimed. 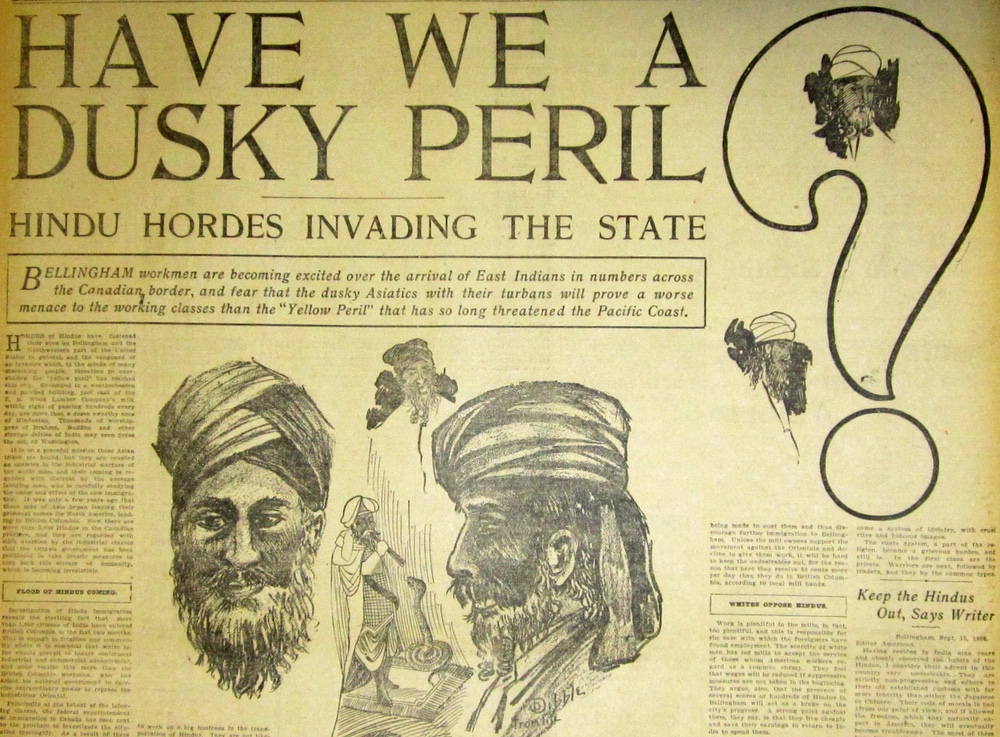 Less than a year later, there was a race riot in that same town, where the group of Punjabi laborers who had settled to work in the lumber industry were attacked and violently chased out of Bellingham by a mob of approximately 400-500 white men. This act touched off anti-Asian mob violence in other parts of Washington, California, and British Columbia.

The xenophobic popular sentiment in the country was also reflected in Congress. Beginning with the Chinese Exclusion Act in 1882, Congress started passing a series of laws tightening restrictions against Chinese migration.

As a response to the increasing immigration from South Asia in the early 1900s, legislators searched for a way to exclude South Asians as well. In 1914, the U.S. House Committee on Immigration and Naturalization held the "Hindu Immigration Hearings," to publicly debate South Asian immigration. Eventually, on February 5, 1917, exclusionists succeeded in overturning a presidential veto by Woodrow Wilson to pass a law barring anyone traveling from a defined "Asiatic Barred Zone" from entering the United States. 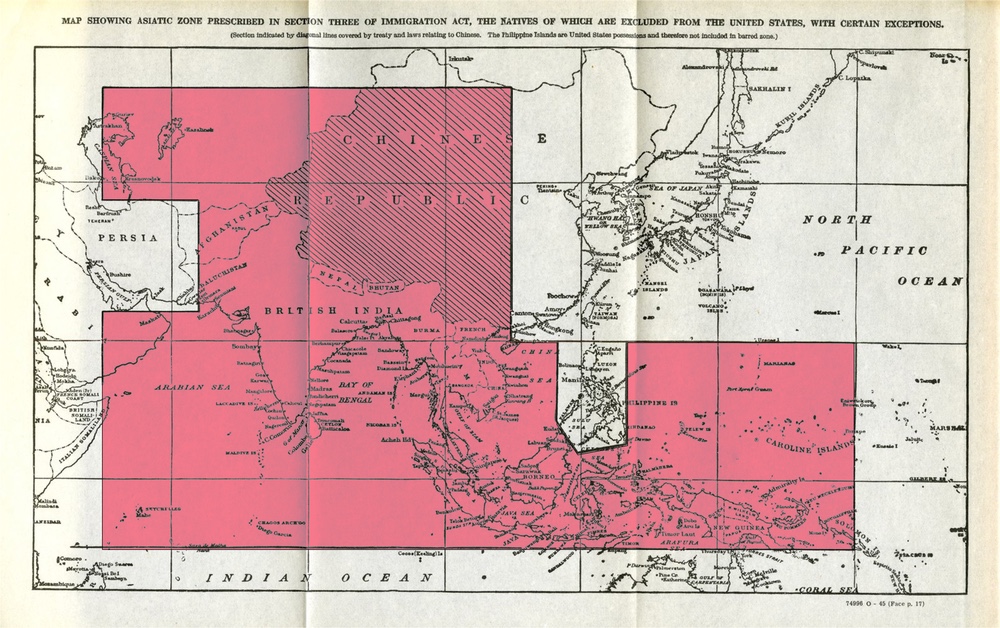 The barred zone included "India, Siam, Indo-China, parts of Siberia, Afghanistan, and Arabia, the islands of Java, Sumatra, Ceylon, Borneo, New Guinea, Celebes, and various lesser groups with an estimated population of 500,000,000." Congressman John E. Raker of California a proponent of the Act explained: "we ought to make our laws sufficiently strong as to … exclude all Asiatic laborers now, so that there will be no question in the future."

The anti-immigrant sentiment of the early-1900s is painfully reminiscent of the recent political and social climate. In fact, it was almost exactly 100 years to the day after the "Asiatic Barred Zone" of 1917 was created that President Trump signed Executive Order 13769 (commonly known as the "Muslim Ban"), on January 27, 2017, barring those from Iraq, Iran, Syria, Yemen, Sudan, Libya, and Somalia from entering the United States.

The Thind decision, just six years after the 1917 Immigration Act, further suppressed the possibilities for the nascent South Asian American community. Not only did it prevent Thind and others from becoming U.S. citizens, but it also stripped citizenship from those who had already done so.

You can read more about the parallels between 100 years ago and today in Tides, our online magazine:
• "Shadows of the Past" by Dr. Kritika Agarwal
• "From 1917 to 2017" by Dr. Seema Sohi
• "Beyond the Muslim Ban" by Dr. Sherally Munshi