An Interview with Jôher Coleman

Q: The biography section of your website mentions that you were born in Wisconsin but went to high school in Pakistan. Could you say a little bit about your upbringing?

A: My mother is from Minnesota and my father is a Pakistani originally born in India. 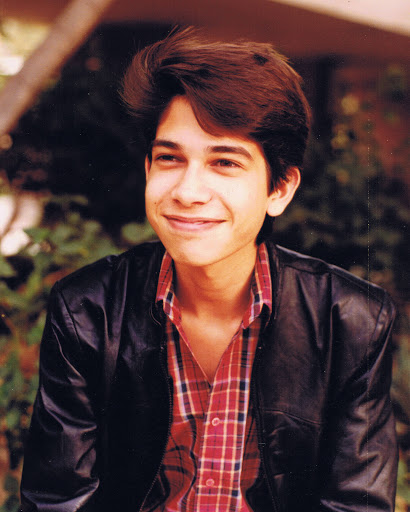 Senior year of high school in Karachi, Pakistan
As a result, my upbringing was a combination of both Midwestern and South Asian cultural influences. I was born and raised in U.S. but spent a total of 2 ½ years in Pakistan. My father has a gypsy heart so any reason to move meant packing up just about every year. Needless to say, I saw a lot of the world but paid for it by not having roots. My childhood experiences were very eclectic. I'd attend a mosque on Friday then read about Jesus in my Baptist private school on Monday. During some years in California, money was abundant and we lived in a big house with a pool. At times in Karachi, my mother didn't have two paisas to rub together.

Even when married, my parents weren't always under the same roof. And when they ultimately separated, I spent a couple years living with each. It gave me a better opportunity to enjoy each of them individually; I have some wonderful memories of that time.

Q: How did you first get your start as an actor?

A: I started my artistic journey at the age of nine when my father tracked down a film acting class when we were living in Los Angeles. 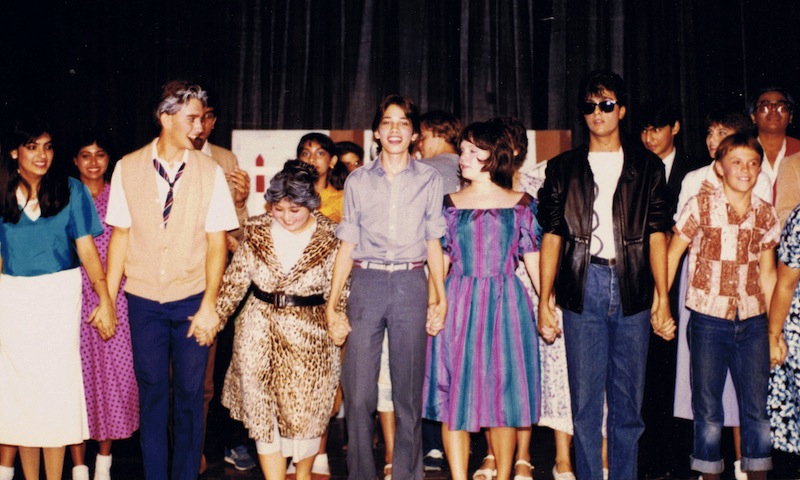 "Bye, Bye Birdie" at Karachi American School (1984)
Earlier, at the age of seven, my first professional interest was to become a comedian but my father's family was shaming of the idea. The most they understood of comedians were the clownish comic actors of 1970's Pakistani film; some of the wackiest overacting you'll ever have the displeasure of witnessing. Shortly thereafter, I found myself envying the fearlessness that protagonists embody in action films; adroitly defending themselves and felling their opponents. I concluded that acting would infuse me with the same bravery and courage of my characters. As a man who has now been acting for roughly thirty-three years, I can attest that courage comes from forging character, rather than playing one. Indeed, the work one does on stage and camera is a pallid reproduction, if not sparked by something real inside the actor first.

Q: Could you tell our readers a little bit about the character Jawaharlal Choudhury?

A: Jawaharlal was the first Indian character in an American sitcom. He was a high-school genius who, along with his family, had just moved to New York. 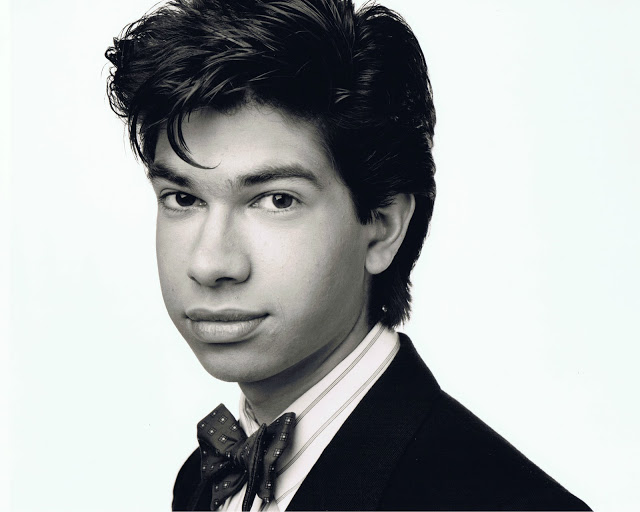 "Jawaharlal" as photographed by Annie Leibovitz
Because I was representing a part of my own ethnic heritage, I felt a tremendous sense of responsibility in terms of how I portrayed him. What the producers envisioned was a sincere but very innocent, naive and maladjusted transfer student. I began to feel uncomfortable with this approach early on. It seemed to underestimated the intelligence, charm, and savvy of Indians and Pakistanis. Moreover, the approach didn't fully resource my abilities as an actor or the character's potential as a unique contribution to the premise. What I didn't understand at the time is that, from their perspective, my function was primarily a mechanical one; to give visual variety to the backdrop against which more mainstream characters would conduct their business. It's absolutely a producer's prerogative to make such a choice but this intention was never directly addressed or acknowledged. What I did know was that my billing and pay were equal to that of the other actors playing students. And at least every other script would focus on a different character in the episode's main “A" story (the “B" story being a lighter sub-plot). Over the course of three seasons and roughly 66 episodes, Jawaharlal never had his own “A” story. I regret that decision but I remain very honored to have played the character and enjoyed maximizing the "B" stories I was involved in. My time on Head of the Class provided me with invaluable skills that have since paid dividends in both life and work.

Q: Looking back on Head of the Class, it seems that that show was an extension of sitcoms like Welcome Back Kotter, only it reflected the changing demographics of 1980s America. South Asians were, in particular, such a muted presence in the pop cultural landscape at a point. What did you draw from in order to create the character? Other actors' performances? Personal experience?

A: Great observation. I was once told by a former ABC creative that Head of the Class was originally conceived by the network as a reversal of “Welcome Back, Kotter”. Instead of a classroom of flakes and dummies, the teacher would be intellectually outgunned by a supergroup of young geniuses. To this day, I think this early premise was just masterful.

In order to create the character, I drew on my own familiarity with the language, culture, norms, and sensibilities of the sub-continent. 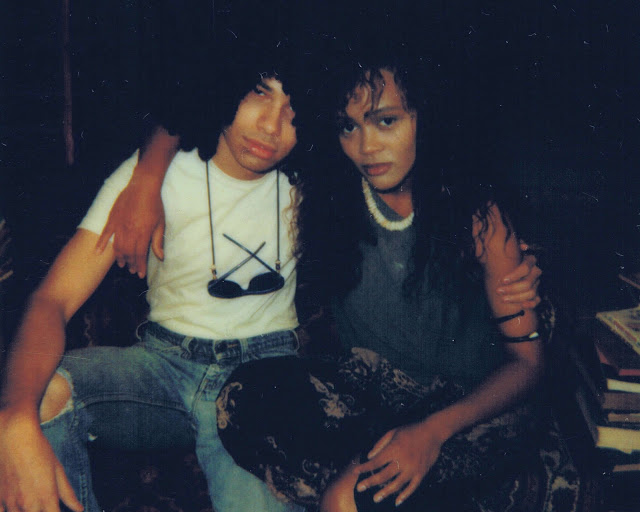 Wardrobe Polaroid from "Head of the Class" episode in which Charlie imagines a terrible future for his students. Darlene and Jawaharlal become beach-living con artists; she a huckster fortune teller, and Jawaharlal her dread head shill.
It might be argued that I was doing a reversal of my own experience. Rather than being a fish-out-of-water American kid in Karachi, I was a fish-out-of-water Indian kid in New York. The theme is the same.

The dialect I used – although softened over the course of the series – was authentic and a result of hearing people from that part of the world speak English. All this is what I drew on to give the character believability. It was especially important to me that Indian and Pakistani audience members felt that they were being portrayed with respect. And, unlike the Pakistani comic actors my dad's family hated, I wanted to honor myself by bringing as much dimension and class to the character as I could within the material given.

Once I felt I had cultural authenticity down, it was really about finding the Jawaharlal in me and really investing in his scripted experiences. For me, it makes for acting that is more personal and personally important. If it was important to Jawaharlal in the episode, it was just as important to me as well.

Q: What were your experiences as a cast member on the show?

Teen magazines were very kind about featuring me in articles and posters. Some of the other cast members and I were referred to as the “Head of the Class Honeys”. Hey, I've been called worse. I also loved doing game shows and public appearances on TV and radio. It gave me an opportunity to to ditch the accent, occasional Nehru collar jacket, and show people who I really was. It was a stark difference that people felt pleasantly surprised by.

Q: Are there specific challenges that someone of South Asian descent faces in the television/film industry?

My impression is that actors of South Asian descent are first cast to fulfill script need based on ethnic “type”. However, smart casting directors and producers in Hollywood bring in a variety of types if a character is based more on emotional quality vs. racial background. I think things continue to improve. An actor of South Asian decent will be well-served if they keep an open mind towards what they audition for: even if it's for the doctor, terrorist, or "convenience store guy" role. (I've done all three). Why? Because auditioning is practice, you can always turn down an offer of work if it doesn't feel right, you can always try to use your talent to give the role touches of depth if cast and, lastly, the script/director may work against cliche by giving it smart, new touches.

Q: What do you make of the increased number of South Asian actors and characters on TV these days? What do you think accounts for this change?

A: I think it is wonderful that there are more South Asian actors and characters on TV these days, though I do miss my monopoly on the market! The truth is that I am a multi-racial actor with South Asian blood. 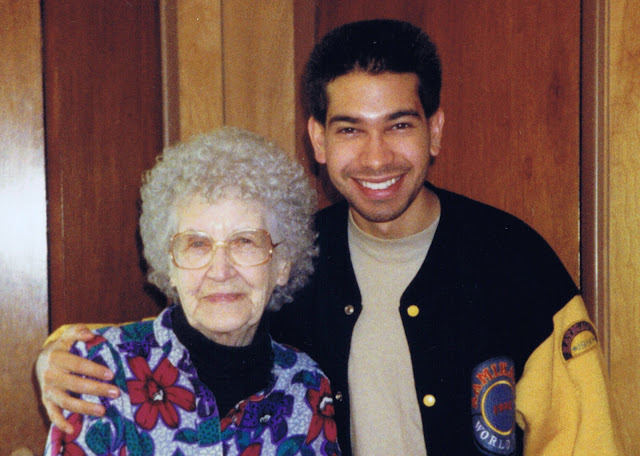 My maternal grandmother, Clara Coleman (1991)
I am very proud of it, in the same way that I am very proud of my Western-European heritage. This has been a key factor in my track-record of playing characters from a whole spectrum of backgrounds: Indian, Pakistani, Iraqi, Mexican, Italian, Puerto Rican, and yes – believe it or not – just plain American.

I think there are more South Asian actors because, in part, the culture has changed. More now than ever, it is more acceptable to pursue acting as a legitimate, honorable, and viable profession. As more South Asians have made the United States their home - shining their light as entrepreneurs, innovators, leaders, and artists - the landscape of television is mirroring their presence.

Q: On Head of the Class, you were credited as Jory Husain. One of our readers on Facebook had actually wanted to know about your name change to Jôher Coleman – when and why the name change? Was it a result of discrimination?

A: My nickname as a child and teenager was “Jory”. At around the age of 19, I decided that it no longer suited me. After many years, I finally decided to go by my first name of birth. 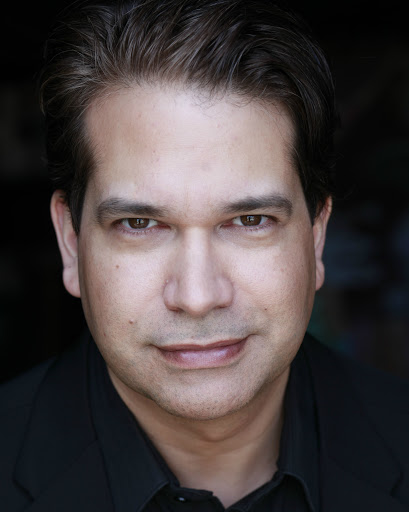 "Jôher" - which can also be spelled at “Jauhar” - means various things in various languages. “Gem” is one of my favorites.

The choice to change my last name was a different decision; one I made for a variety of reasons. Perhaps the most important is that, having been raised a Muslim, it became clear to me that there were key elements of Islam that I did not believe in or agree with. It would have felt disingenuous to my own sense of authenticity (and disrespectful of Islam itself) for me to continue describing myself as Muslim or bear an Islamic last name. Out of respect for my father and myself, I was very candid with him about these feelings. Moreover, as my birth name never reflected the Western European side of my heritage, it felt like that time had come. I took my mother's maiden last name. I have been Jôher Coleman ever since.

Spiritually, I am inspired by aspects of secular humanism, metaphysical Christianity, Islam, and Buddhism. Further, I believe that a grounded search for higher truth demands skepticism, critical thinking, science, emotion, and intuition. In so doing, I believe in the compatibility of seeming opposites. 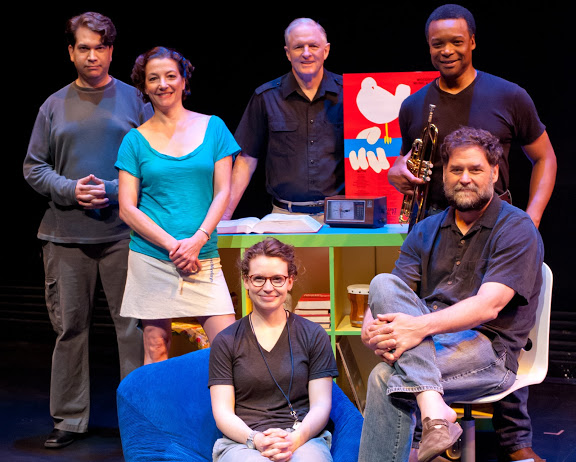 Cast photo from world premiere of "Play What's Not There" at the Guthrie Theater
Q: What have you been doing lately?

A: In the past twelve months, I've acted in four plays; two of them world-premiere. This summer, I completed a supporting role in the new film "Death To Prom". I write my online column, coleManOnFire, which can be described as an intersection of commentary, culture, creativity, the comic, and the carnal. I also post on Twitter. Lastly, I attend college where I am studying subjects such as singing, piano, and believe it or not, a little something called “acting”. My professors tell me I'm a little green but who knows? Maybe one day I'll be good enough to go to Bollywood...