The Legacies of Small Businesses


Small Business Owners on Surviving the COVID-19 Pandemic
By Sanjana Nigam |
In December 2019 I was a student at Columbia Journalism School, navigating assignments and reporting stories across New York City. For my broadcast class, I pitched a story about three restaurants—Milon, Panna II and Royal Bangladesh– on Manhattan’s Curry Row in East Village that had somehow managed to stay afloat despite rising rents and deep competition with each other. These neighboring restaurants are East Village institutions, popular amongst tourist crowds for their Bangladeshi cuisine and year-round Christmas ornaments and lights. On a normal pre-pandemic day, one would be drawn in by the bright lights on a walk past, and greeted by men from each restaurant inviting one into their respective restaurant, and away from their competition. Unfortunately the lively energy of these three locales was paused when the COVID-19 pandemic would hit two months later. I went to check in on these three businesses nine months later to find Milon had closed its doors for good amid the pandemic. Panna II and Royal Bangladesh are still alive today, with the former having expanded into Milon’s space, and the latter living end-to-end to still stay standing.

For my broadcast story, I interviewed Olid Ahmed, the owner of Milon which is the original and oldest of the three restaurants. Back in the 1980s when Milon opened, the area was known as Manhattan’s “Little India” and stretched for a few blocks. It was filled with Bangladeshi restaurants that advertised their cuisine as Indian, since many American patrons didn’t know where or what Bangladesh was. Today, Curry Row has been reduced to one block with a handful of restaurants and a single storefront maintaining its South Asian name.

In my conversation with Ahmed, I learned about the histories of both Curry Row and his family. Ahmed’s uncle immigrated from Bangladesh to New York City and opened Milon in Little India’s early days. After its success, he was able to purchase the storefronts next door to his restaurant, expanding his business. After some years running three storefronts, things took a hit and Ahmed’s uncle had to sell the other two restaurants, keeping only Milon, which he later passed on to Olid. The other two storefronts would later be bought out and turned into Panna II and Royal Bangladesh.
Olid Ahmed and Milon’s legacy are the inspiration for my Archival Fellows project: documenting first-generation, working-class South Asian-owned small businesses across New York City’s five boroughs. In particular, I will be focusing on small business owners who near lost their means of livelihood during the Covid-19 pandemic. Through archiving and gathering these first-hand narratives, I hope to immortalize first-generation immigrant business owners’ experiences and demonstrate the significance of the South Asian community in New York City.

This began as an independent passion project. Prior to becoming a SAADA fellow, I had spoken to a few small business owners about their experiences. I focused on the business angle of the stories, and struggled with treading the fine line between reporting and storytelling, running into roadblocks that made me think about journalistic ethics and the construction of “topicality” in the field. I soon came to realize that this project does not call for a strictly journalistic approach, but rather one which prioritizes the human story. The heart of this project lies in each immigrant’s individual lived experience as a small business owner in New York City, not the function of their business, the uncertainty of the pandemic, or the economic climate.

Becoming a SAADA fellow has enabled me to shift the form and focus of the project from journalism to oral history. I am now undertaking a preservation project with storytelling at its forefront. As someone trained in journalism, I have had difficulty at times breaking free from the mindset of asking certain ethics questions or focusing less on the “now.” However, I now have the opportunity to ask a more diverse range of questions and explore the nuance of each interviewee’s experience of being a first-generation immigrant and business owner.
The loss of small businesses across New York City, from the closures of restaurants and food trucks to emptied mom-and-pop storefronts, has been a looming concern since the pandemic rattled the world. Finding out about Milon’s closure in mid-2020 felt like a terrible loss. After hearing Ahmed’s family’s history and witnessing several people mourn the loss of Milon on social media, the significance of the restaurant to its community was apparent. Projections show that when the pandemic subsides one-third of New York City’s small businesses may never open again. This adds up to about 240,000 small businesses, according to a study by Partnerships for New York City. In communities like Jackson Heights which are South Asian dominated, consumer spending dropped 73% between 2019 and 2020, leaving many small business owners’ livelihoods and only sources of income in limbo.

When restaurants like Milon close, they leave a hole in the lives of those who relied on them as a refuge or a memory of home. For many growing up in the South Asian American diaspora, including me, these small businesses are how we remain close to our cultures back home. These businesses are immigrants’ legacies, and their stories of growth, survival, and loss deserve to be documented. 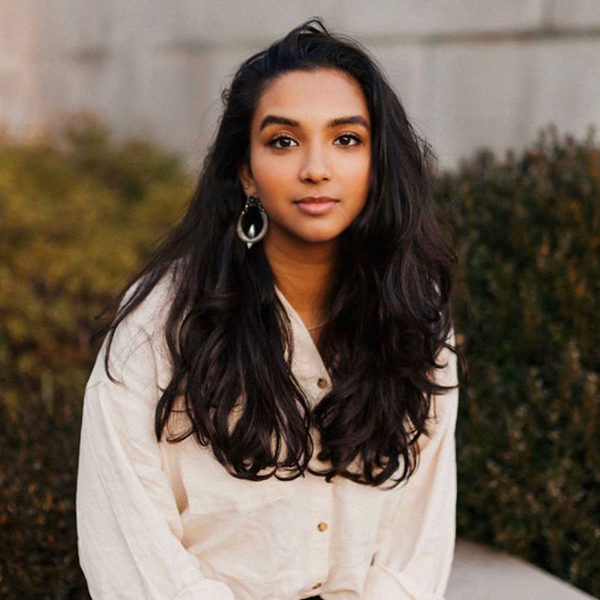 Sanjana Nigam is a native New Yorker and Indian-American-Canadian journalist. Sanjana’s project will focus on the stories and histories of first-generation South Asian-owned small businesses across New York City’s five boroughs who lost their means of livelihood in the height of the Covid-19 pandemic. The Archival Creators Fellowship Program is made possible with grants from The Andrew W. Mellon Foundation and the Institute of Museum and Library Services (IMLS).