Shanta Nurullah, The Sister with the Sitar: A Musician’s Journey


By Satya Gummuluri |
In the late 1960s, a 19 year-old student from the South Side of Chicago found her instrument in Pune, India. She had come to India on a split second decision to get away from a turbulent time in her life wrought by the ongoing political and racial strife in America.

Shanta Nurullah (born Velma Patrice Neal) was in her junior year of college at Carleton College in Minnesota when she decided to go to India. 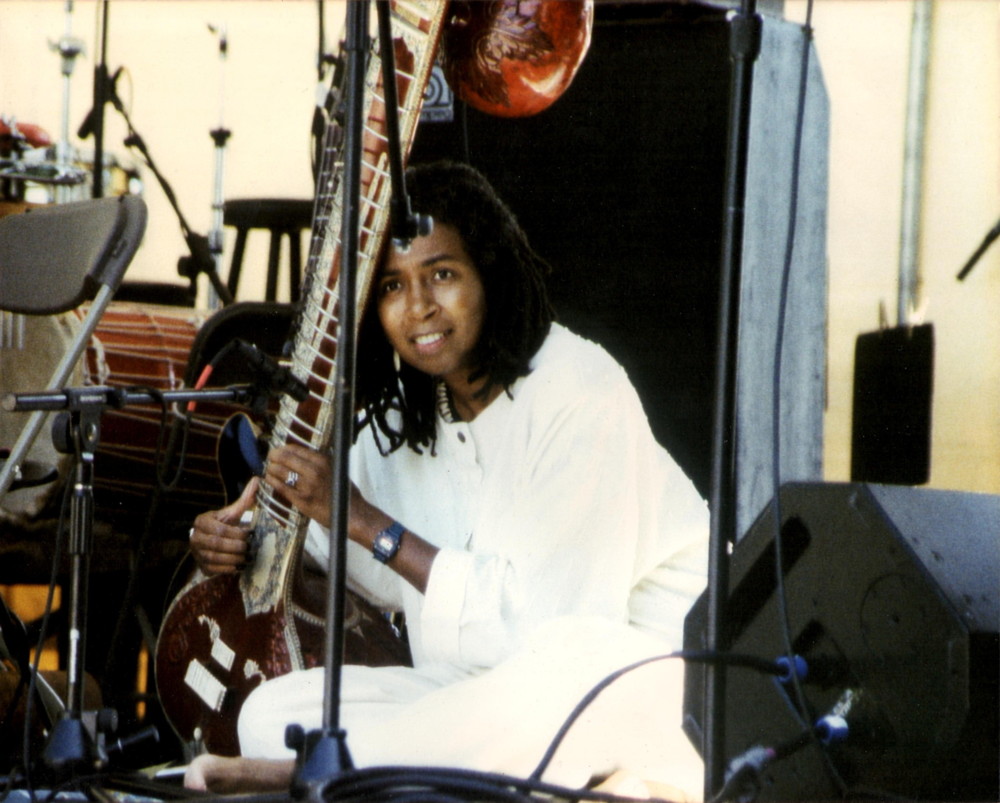 She had been recruited by Carleton in 1967 after graduating as valedictorian of her class at Hirsch High School. “This was a time when big foundations were giving money to colleges to diversify their student bodies,” Shanta explains. “My freshman class brought the total enrollment of black students in the whole school up to twenty four. It was hard being there. Freshman year was when Dr. Martin Luther King was assassinated, Bobby Kennedy was assassinated. A lot of turmoil.”

College in those early years of racial integration was a restless experience at many levels -- from racial tensions felt on campus and in the community to a demoralizing experience with formal music education. Shanta involved herself in theater, taking part in plays that dealt directly with racism and raising awareness in the community, as well as copiously reading the literature formed out of the movement for civil rights and Black self-determination.

Shanta explains, “I was trying to find a way to get out of there. I was at lunch one day; we had these communal tables. There was a news bulletin. I picked it up and it said the deadline for the India program is tomorrow. So I was like, OK! I applied for the program. A few months later, [I was] in Pune.” She went with a group of thirteen students. Her intent was to begin a research project on Dalits (once known as “Untouchables”) I was there for about a week when I heard the sitar and absolutely fell in love.from a political science perspective, for which she had done preliminary work in college.

She found a teacher in Pune, Pt. Bhaskar Chandavarkar, well known in the Indian classical music world and a celebrated music composer in the film industry, known for his innovative creations for parallel cinema. He had been a disciple of Pt. Ravi Shankar, and was head of the music department at the Film and Television Institute of India at that time. Shanta, who had studied piano through childhood, immersed herself into this new music, taking sitar lessons and attending the abundant music concerts in Pune, a city with a traditionally deep regard for the arts. This was the year Pt. Chandavarkar was featured in Pune’s unique Sawai Gandharva Music Festival. She studied technique, ragas, taals and other aspects of Hindustani music from him on an intensive schedule for six months. One of the things she really delighted in was learning the Rupak taal, a rhythmic cycle in 7/4 time commonly used in Indian classical music, and as she found later, in jazz.

Shanta’s experience in India was formative. The music clicked, but she describes her experiences as an outsider as difficult: “I had never seen purple sunsets and walking down the street, the smells, the flowers, the incense. It was a sensory delight, 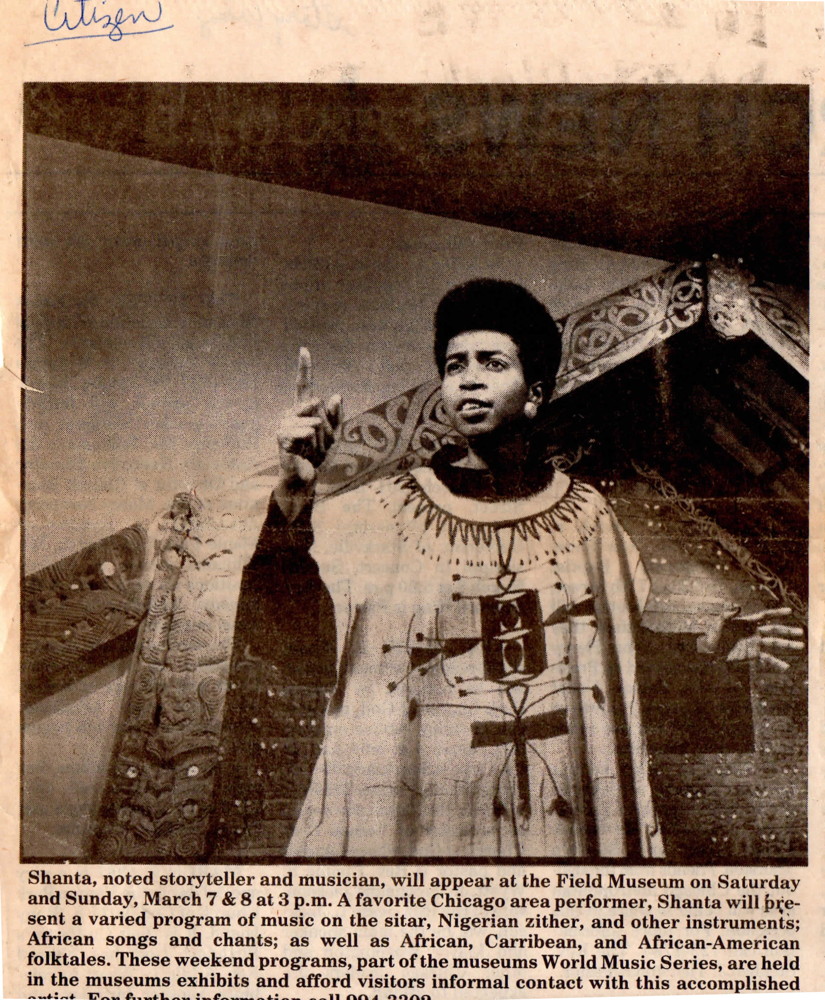 but it was a really isolating experience for me. I had this huge afro at the time, and walking down the street people would run in their house and get all of their relatives to come and see me. I'd get on the bus and [...] the whole bus would turn around and start cackling at this strange person.” That was until Sai Baba came to town, Shanta explains. “The Sai Baba posters were everywhere. And then I was cool right! (Laughs)... When I got back to the States, well I had gotten kinda spooked out by people in India telling me there's no way you can play this instrument. You have to study everyday for five years before you know anything. But I had found a way in with the blues and spirituals, that's what I was playing on my own for figuring out stuff. So when I got back to college, when we had to do our final presentation, I was playing a little light raga stuff but it was the beginning of playing me, expressing me. That's basically where I come from. I do not pretend to play Indian music.”

After graduating from Carleton, Shanta returned to Chicago where the vibrant Black Arts Movement was flowering. She joined the Kuumba Workshop, an influential black experimental theater group presenting plays and “rituals” which exercised the principles of spontaneous expression and improvisation within a formal framework. While at the theater company, she discovered the bass, and started taking lessons with Association for the Advancement of Creative Musicians (AACM) guitarist Pete Cosey. Cosey was sideman to Miles Davis in his electric excursion, and member of AACM founder Phil Cohran’s Artistic Heritage Ensemble. Cosey introduced Shanta to Phil Cohran, renowned jazz trumpeter who had been part of Sun Ra’s Chicago band, and she became part of Cohran’s Black Music Workshop ensemble.

The AACM, a Chicago-based collective formed in 1965 by visionary experimental musicians committed to nurturing modern music and original expression, provided a venue for the development and performance of avant-garde music. Shanta took her bass initially. She explains: “Phil welcomed me and asked what else do you play. I said, ‘Well, the sitar.’ ‘Well you should bring that.’ I said, ‘No, I can't bring it in, I haven't studied enough.’ [He said,] ‘Sister, that instrument came from Africa and so did you. Bring it!’ And that was my permission.” 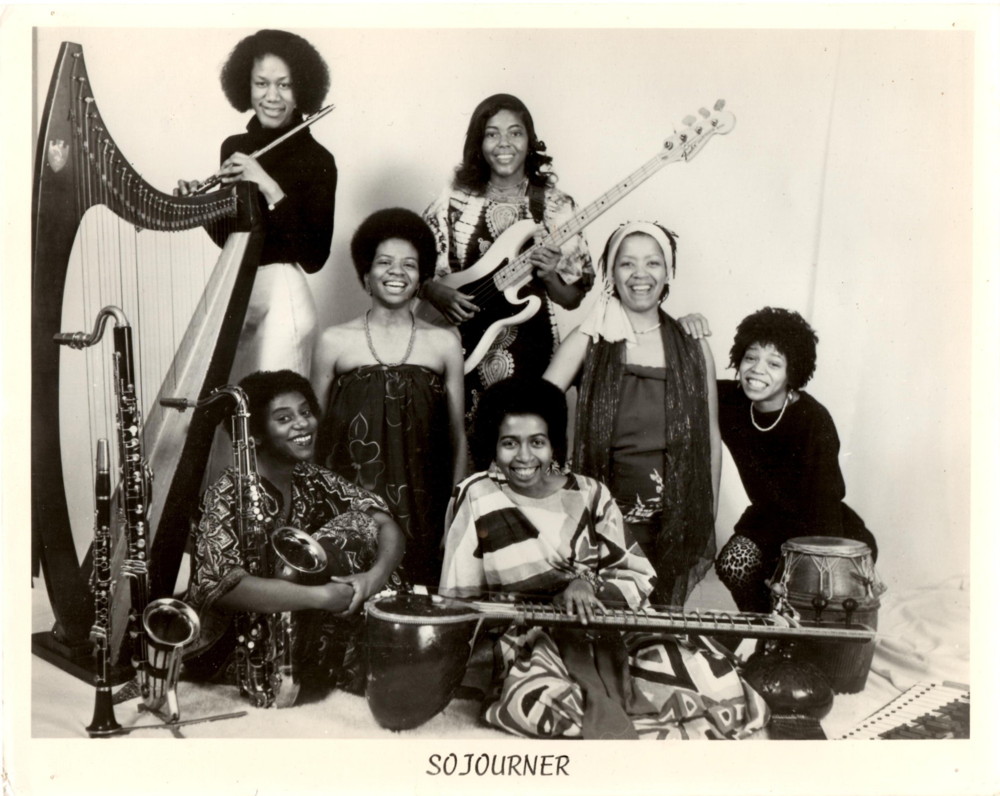 Cohran and Shanta soon were playing duets on the harp and sitar. With AACM, Shanta reconnected with odd-meters, Phil’s specialty. She continued to be a member of his ensemble for four years.

Since 1971, Shanta has been a lecturer and teacher at various institutions around Chicago, while playing in music groups as sitarist and bassist as well as playing West African instruments such as the mbira, four-string harp, and reed zither. Her storytelling career took flight in the late seventies and she wrote regularly in publications like Ebony Jr. and Black Books Bulletin on gender, race and music. [Note: These and other details of her life and work are documented in D. Antoinette Handy’s Black Women in American Bands and Orchestras.] In addition to playing sitar in groups like Insight, >Shanta co-founded Sojourner and Samana, two pathbreaking all-women bands in the 1970s.

When I first heard of Samana, I’d been drawn to their name as much as to the nature of their music. They brought together experimentation with diverse instruments and grounded traditions and disciplines. I was inspired by the sense of freedom in what they were doing. The Sanskrit word “samana” itself is a powerful one; in my mind, it alludes to “equal.” Shanta told me that the name came from the initials of the founders (S for her, M for Maia, and N for Nicole Mitchell), and from an exclamation by Maia about their group being “some manna (from heaven)!” She said they also found out that samana are traveling, holy monks, as Herman Hesse had made colloquial in Siddhartha…“it all worked!” At its core, the band consisted Shanta, Maia, a multi-instrumentalist, composer, dancer; 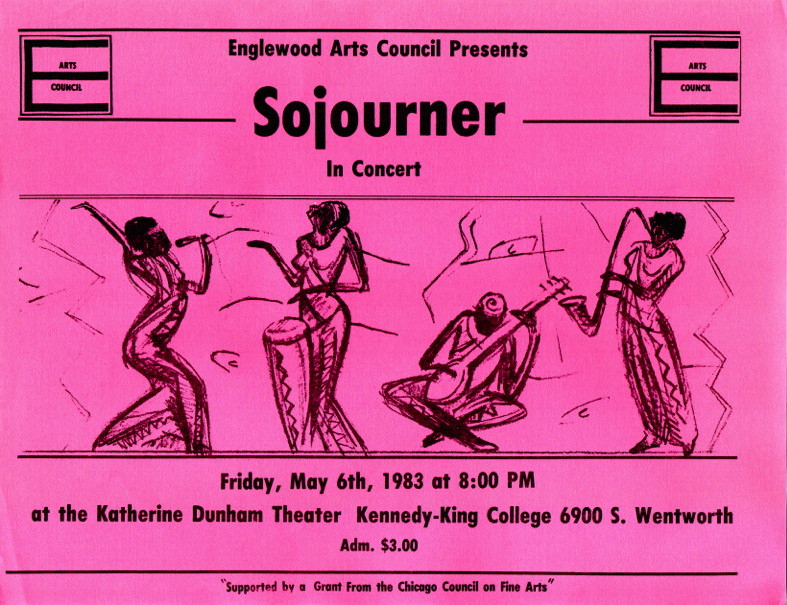 and, Nicole Mitchell, the celebrated jazz flautist, composer, and future AACM president.The group came together at a time when the issues around female membership and gender dynamics in the AACM were sharply debated. George E. Lewis, in his seminal book A Power Stronger Than Itself presents in beautiful depth the history and dynamics of the AACM and the stories of its member musicians. Shanta, Mitchell, and Maia joined the few other women members in AACM, and Samana became the first all-woman ensemble under the aegis of the AACM. Along with the three founders, the group featured other women instrumentalists, vocalists and dancers. Their message was one of healing and inspiration, which they presented through their music which combined instruments, concepts and influences from the East and West. During the 80s and 90s they made quite an impact, performing to admiring crowds, with notable appearances at the Women Of The New Jazz Festival, Steppenwolf Theater’s “Traffic” Arts Performance Series, and First Lady Hillary Clinton’s 50th Birthday Celebrations. In 1997, Samana was the first all-woman group to play at the Chicago Jazz Festival with founding members Maia, Shanta, and Mitchell, accompanied by Aquilla Sadalla on clarinet and Coco Elysses on percussion.

Listen to an excerpt from track “A Village of Women”: here.
by Shanta featuring Samana
from her CD Lightworker
© 1994 Storywiz Records

“People still ask about Samana getting together, we made a definite impact,” Nurallah tells me. “Women especially found us inspiring. We'd pull out the drums and defy all the naysayers [who thought] women shouldn't be playing hand drums. It was fun. We worked hard and demanded a lot of each other… as a band we were really tight.”

Today, Shanta maintains a vibrant creative life of teaching, making music, and storytelling in Chicago and elsewhere. She is an internationally acclaimed storyteller of African and African-American folktales, which she accompanies with music on a variety of instruments and the sitar. She talks of how listeners have expressed gratitude to her for having introduced them to the sitar, something they would not have been conscious of otherwise. She brings her stories and music in her own graceful manner, sharing her message of empowerment, self-discovery and healing. Shanta’s own story is an inspiration – that of finding one’s voice and fearlessly expressing it.

Learn more about Shanta: here
Satya is a vocalist/composer with a deep curiosity for the why and the how. Please visit www.satyamusica.com for more about her music.