Mutual Aid Powered by Bangladeshi New Yorkers
By Joymala Hajra |
On March 22, 2020, New York City Mayor Bill De Blasio’s office issued a stay-at-home order to prevent the spread of the COVID-19 virus. NYC had already sustained a quarter of the COVID deaths in the nation by April 6, 2020. To date, the disease has claimed the lives of an estimated 35,683 New York City residents and over 5.47 million people worldwide. Like so many New Yorkers, I found myself overwhelmed by the unprecedented level of hardship and joined a few mutual aid groups in Brooklyn, where I connected with a community leader named Kazi Fouzia.

Kazi has dedicated her life to working for the rights of workers, women, and immigrants both in Bangladesh and NYC. She is the Director of Community Organizing at Desis Rising up and Moving (DRUM), an organization serving low income South Asians and Indo-Caribbean New Yorkers. For months, I observed her work tirelessly as she facilitated a complex city-wide mutual aid effort focused on the most vulnerable populations.

Before the New York State Excluded Workers Fund was approved in April 2021, undocumented workers were unable to receive stimulus funds. Essential workers living in overcrowded housing were more likely to be exposed to the virus. Immigrants with limited English proficiency required urgent health protocol communicated in their native languages. Kazi organized donations, food delivery, distribution of PPE; she leveraged all her personal and professional resources with media, organizations, faith groups, and city agencies. She worked closely with a group of Bangladeshi women who led mutual aid efforts in Queens, the Bronx, Staten Island, and Brooklyn. For my SAADA project, I will collect oral histories of Bangladeshi-Americans who are not only serving marginalized populations during the COVID-19 pandemic, but working towards justice for marginalized people of all backgrounds within and beyond the borders of the United States.

The pandemic laid bare correlations between health disparities and structural violence while deepening systemic inequalities among marginalized groups. Communities of color experienced a disproportionate number of deaths and economic hardship. The city governance lacked the knowledge and resources to address the issues faced by working class and immigrant communities living in the hardest hit areas like central Queens, south Brooklyn, and Parkchester in the Bronx. Leading Communities of Care will showcase voices of Bangladeshi New Yorkers who are building intersectional solidarity and doing advocacy work that expands the government’s understanding on how to best serve these communities.

New York City1 is home to over three million immigrants. Bangladeshis are the fastest growing group, with a population that went from 27,323 in 2010 to 53,291 in 2019. The Bangladeshi community of NYC was especially hard hit during the COVID-19 pandemic for a number of reasons. While Asian Americans, as a flattened demographic, earn 38% more than the national average, we also have the highest rate of income inequality within a racial category. Bangladeshis have the highest poverty rate (32%) of all ethnic groups in NYC, forcing many to live in overcrowded housing. 82% of Bangladeshis in New York City are essential workers. Many community members have limited English proficiency, which proved to be an issue when the city did not translate vital public information about the pandemic into other languages, including Bangla. In many reports, Asian Americans appear statistically equal to whites in terms of COVID deaths; however, Bangladeshi community leaders in NYC are utilizing reports from community groups, Bangla ethnic media, and block associations to keep count of Bangladeshi New Yorkers deaths. They do not trust official data, arguing that the category of “Asian” is not expansive enough to capture the reality of Bangladeshis in the city.

Two decades of rising xenophobia after 9/11 have resulted in the harshest anti-immigrant policies in recent US history. After the election of Donald Trump, immigrant communities were subjected to the Muslim travel ban, refugee restrictions were increased, DREAMers were attacked, and immigration enforcement violated detainee human rights with impunity. In response, a group of like-minded advocates formed the Bangladeshi Americans for Political Progress (BAPP) in November 2019, just a few months before the pandemic hit. BAPP is a political hold for anyone in the Bangladeshi community who wants to advance the well-being of working class and low-income communities. Moumita Ahmed & Rima Begum (Queens), Thahitun Mariam (the Bronx), and Shahana Hanif (Brooklyn) represent different boroughs and have created a decentralized organizing space, where their values are aligned. BAPP members share resources and build together, but also work on their individual projects.
Moumita Ahmed honed her digital organizing skills while working for the Bernie Sanders campaign. When the pandemic hit, she was inspired by mutual aid groups in the UK and how they were interacting with their government. She attended a town hall led by Alexandria Ocasio Cortez and abolitionist feminist Mariame Kaba. Deeply inspired, she founded Queens Mutual Aid. Using her digital organizing skills, she quickly built a request/supply system, mobilized and trained volunteers focusing on hard-hit neighborhoods. She observed that many mutual aid groups had listed people's contact information online and were open to the public. Knowing that undocumented people, elderly people, and people with limited English proficiency would not be willing or able to interact with mutual aid in that way, she led her team of volunteers to do field work. They printed out flyers, did building trainings; they door-knocked, and called community masjids.

Rima Begum also brought her many talents to Queens Mutual Aid. A social worker focused on policy and law to reduce the mental health impact on working-class communities, she organized the nation’s first Bangladeshi American tenant union and led an organized rent strike in New York called the Cancel Rent Campaign, which led to the passing of the emergency rental assistance fund in the amount of 2.7 billion dollars. The fund covered 15 months of rent during the pandemic. 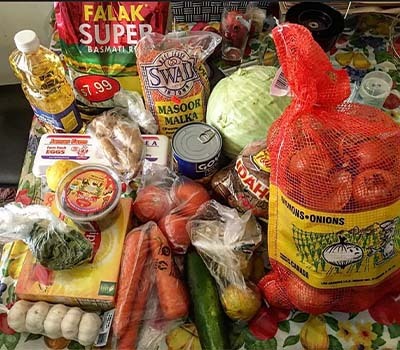 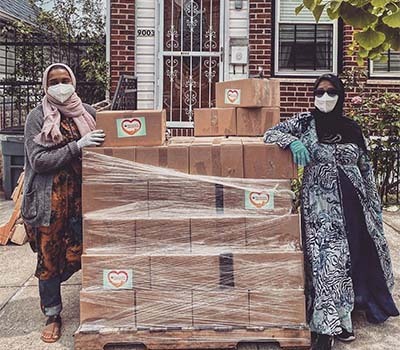 The city hired a military contractor who offered meals that were not ideal for many.

In south Brooklyn, Council Member-Elect for Brooklyn’s 39th District Shahana Hanif and her sister Sabia launched the COVID-19 Survival Fund for Undocumented Bangladeshis. They fought for the dignity of undocumented families by organizing donations, delivering food, and supporting local businesses. BAPP co-founder Thahitun Mariam was able to replicate aspects of Queens Mutual Aid operations and founded the Bronx Mutual Aid Network, which unites volunteers of diverse backgrounds who not only do census and mutual aid work for their own community, but are also involved with Palestinian Rights and Black Lives Matter. 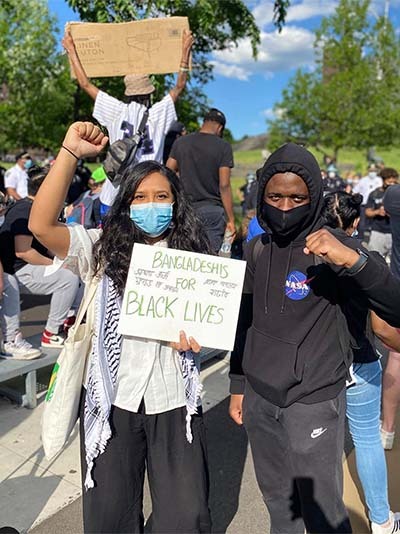 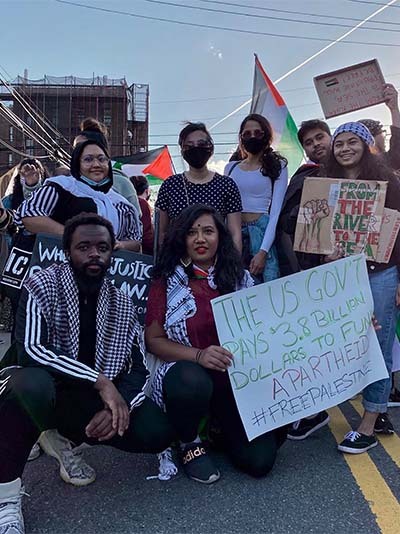 Thahitun Mariam (center) with Bronx mutual aid in solidarity with BLM and Palestine.

In Staten Island, Shahana Masum applied decades of community organizing and progressive political work experience and connected with various faith, interfaith, and women’s groups to lead a more informal mutual aid network. In contrast to BAPP co-founders who formed a sisterhood with a robust network of allies, Masum navigated her road to political engagement on her own, with little support. She began helping Bangladeshi immigrants navigate employment, housing, family life, and healthcare in the late 1990s through her work with the Muslim Ummah of North America (MUNA). After 9/11, she began to get involved with local politics and eventually found her community of progressive non-Bengalis and interfaith community who helped guide her. She is on the board of the Language Assistance Advisory Committee and advocated for Bangla to be represented in all NYC agencies; she worked on the GARB bill for 15 years to protect the right of people of all faiths to wear religious clothing and advocates for the right to free tuition, universal healthcare, and fair representation of minorities.
Like many immigrant groups, Bangladeshi New Yorkers feel connected to struggles back home. The pandemic increased social inequalities among already marginalized groups in Bangladesh, which motivated many to support aid efforts in Bangladesh as well. Jahin Rahman, founder of Efforts in Youth Development Bangladesh creates educational opportunities for street children in Bangladesh. Several of his initiatives including a drug rehabilitation center, a computer lab, and reusable menstrual hygiene product program were completely halted during the pandemic. However, with students at home during the lockdown, Jahin was able to mobilize hundreds of volunteers across many different countries to support his mission of uplifting community-based solutions towards the eradication of poverty. Jahin credits the Bangladeshi performing arts community in Queens for supporting him in his work. 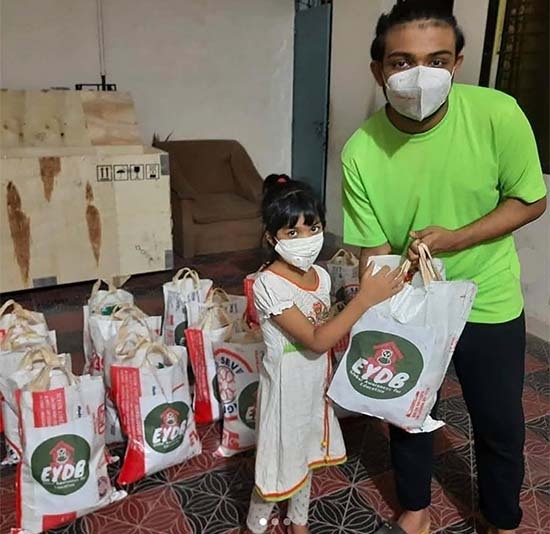 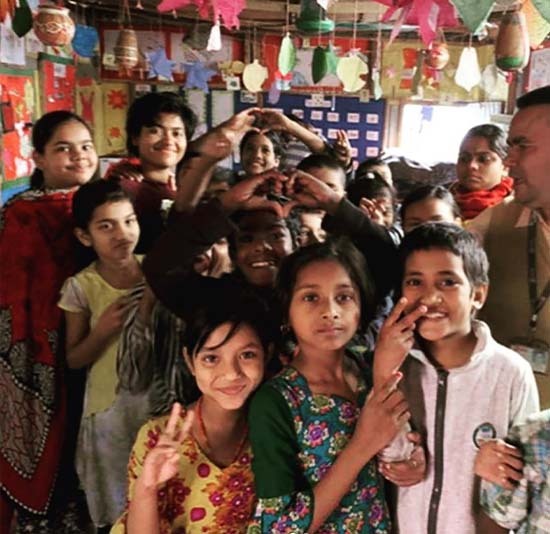 The pandemic has amplified many ongoing hardships, but there have also been significant victories led by historically disenfranchised groups. Internationally, tens of thousands of mutual aid groups have replicated theory and practice originating from African American Mutual Aid societies to provide essential care. It is my hope that Leading Communities of Care will remind us of the power and safety we are able to find within ourselves and each other. 1. I wish to acknowledge what is known today as New York City are ancestral Lenape homelands, and honor all of the indigenous nations and their land with great gratitude. I acknowledge the genocide and continuous displacement of indigenous peoples, as well as the enslaved Africans whose labor built NYC during the colonial era and beyond. 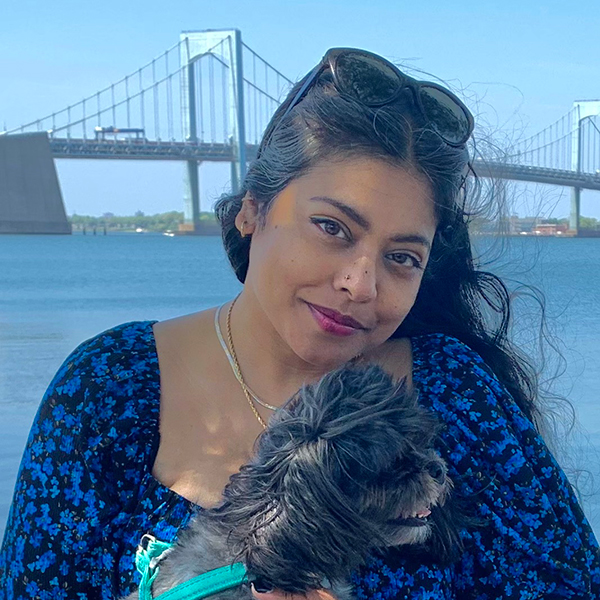 Joymala Hajra is a NYC born creative with Bangladeshi roots. She is thrilled to share the beauty and brilliance of Bangladeshi New Yorkers through this project. The Archival Creators Fellowship Program is made possible with grants from The Andrew W. Mellon Foundation and the Institute of Museum and Library Services (IMLS).