Review: "The Problem with Being Slightly Heroic"


By Anna Coats |
Dini, nearly a year older and more insightful, is back in Uma Krishnaswami’s latest novel, The Problem with Being Slightly Heroic. In Krishnaswami’s first young reader novel, The Grand Plan to Fix Everything, readers were introduced to 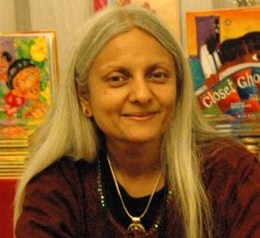 Uma Krishnaswami
Dini and Maddie, two best friends in Takoma Park, Maryland who adore the Hindi film star Dolly Singh. Dolly and Maddie are looking forward to summer Bollywood dance camp when Dini’s parents break the news that in two weeks they are moving to India – which turns out to be the best thing ever because Dini meets and befriends filmi star Dolly!

In The Problem with Being Slightly Heroic, Dini returns to Maryland to reunite with her best friend Maddie and help Dolly plan the American premiere of her new movie, Kahan hai Sunny Villa? -- KHSV for short -- at the Smithsonian. As in Dini’s last adventure many problems result from leaving adults in charge: Dini must find someone to make Dolly rose petal milk shakes in Washington D.C., find Dolly’s missing passport, find a replacement chef to make a chocolate cake with rose petals, find a new caterer, find an elephant, and get scatterbrained Dolly to remember Maddie’s name – quite a tall order for a twelve-year-old!

In Dini’s last attempt to fix grown up problems in Grand Plan, readers were acquainted with Dolly’s childlike temper tantrums when things do not go her way. There was little commentary from Dini on Dolly’s actions because Dini was too starstruck and enamored with Dolly’s film persona to be critical of real-life-Dolly.

In Slightly Heroic, Dini begins to notice that film-Dolly and real-life-Dolly are not the same person, and that real-life-Dolly has real life flaws, such as expecting people to do everything for her without even a thank you. This realization is slow coming for Dini. Near the beginning of the book she 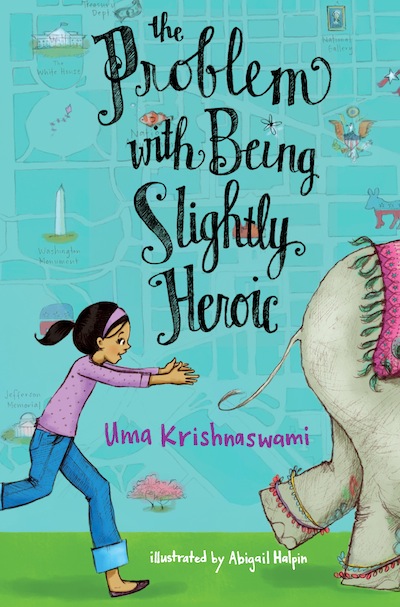 still believes, “Dolly in real life is like Dolly in the fillums, brave and kind, and all about fairness. What’s a little thank-you here and there compared with that?” (73). Dini’s desire to see goodness in others, especially her hero, and her awareness of the difference between right and wrong conflict when Dolly displays bad manners. Dini’s slow but gradual realization about people’s multifaceted personalities makes her a realistic and relatable twelve-year-old.

Slightly Heroic raises other real life issues as well. When Dolly first arrives at BWI Airport, Dini and Maddie inform the cabdriver that their companion Dolly is a famous movie star in India. When they invite the cabdriver to the grand opening of KHSV at the Smithsonian, his response is, “I'll bring my wife. We both love Indian food,” and continues, “I'll tell my buddy Tariq. . . He's from Bangladesh. You know him?” (26). The presence of this culturally unaware response offers opportunity for discussion with children about experiences they may have faced, as well as how to interact with people from different cultures.

Another thought provoking scene in the book is a dual conversation between Dad and Chickoo Uncle, and Dini and Maddie:

Dini rolls her eyes. Who would believe it? In Swapnagiri in the Blue Mountains of south India, Dad found a stash of old Westerns once willed to the library by an American expat tea planter, now regrettably deceased. Dini waits to see if Chickoo Uncle gets the obscure idioms that so delight Dad.

At the forefront of this scene is Dini’s embarrassment over Dad’s corniness but beneath the surface this scene is a great discussion starter about cultures and stereotypes.

Slightly Heroic is a fun young reader novel that challenges stereotypes just by existing: Dini’s friends Maddie and Brenna, who happen to be white, are as obsessed with Dolly and Hindi films as Dini is; rose petal milkshakes are the most delicious drink in the novel; and chocolate cake with rose petals is the most sought after food. The Problem with Being Slightly Heroic is a great novel for breaking out of one’s bubble and “exploring” another culture; seeing characters like yourself, your family, and your friends; and imagining what it would be like to meet and befriend your favorite celebrity.
Anna Coats is the children’s librarian at East Rutherford Memorial Library. She received her M.S. in Library & Information Science from the University of Illinois at Urbana-Champaign and her M.A. in English from Rutgers University-Newark.