While South Asians are noted to have been in the United States since the 1700s, their larger presence starts in the late 1800s.

Indian farm laborers, San Joaquin Valley Island, 1909.
Some of the earliest known South Asian settlers in North America were from the regions of Punjab and Bengal. A number of Muslim Bengali peddlers first arrived in New Orleans, where they later integrated with communities of color in cities like Detroit, New York, and Baltimore . Around the same time, migrants from Punjab -- primarily Sikh men -- made their way to the West Coast of Canada. The targets of anti-Asian sentiment, many of these early migrants left Canada for the United States, creating communities along the Pacific Coast states. In the U.S., the living conditions for these migrants were often just as difficult, and they were the victims of legal discrimination as well as violence from anti-Asiatic groups. Unable to bring over wives and with interracial marriage with whites against the law, a significant number of Hindu and Muslim Punjabi men married Catholic Mexican immigrant women . A smaller number of students and political activists from British India and Ceylon also arrived directly to the United States in the first decades of the twentieth century, many of whom became involved in expatriate nationalist organizations like the Gadar Party in San Francisco and the India Home Rule League of America on Broadway that agitated against the British empire.

The road to citizenship for South Asians in America has been a long and difficult one. In 1917, the US Congress passed an immigration act which restricted migrants from the "Asiatic Barred Zone" -- 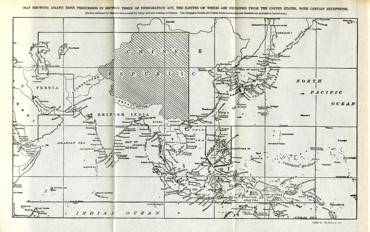 Map depicting Asiatic Barred Zone
a region that included the entirety of the Indian subcontinent. In the landmark 1923 case of United States v. Bhagat Singh Thind, the U.S. Supreme Court ruled that South Asians were ineligible from naturalization, preventing South Asians from gaining citizenship and stripping citizenship status from those who were granted it in the years prior. This law would stand for the next two decades, until President Truman signed the 1946 Luce-Celler Act which provided naturalization rights to both South Asians and Filipinos, but still limited the number of migrants allowed into the country. While small in number, the South Asians who immigrated in the following two decades started the community’s major presence in motels, in medicine, and in engineering. In response to the U.S. Civil Rights Movement 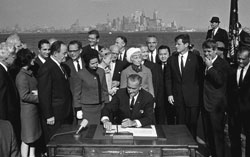 President Lyndon Johnson signing the 1965 Act.
and international critiques, the U.S. changed its discriminatory immigration laws. The Immigration and Nationality Act of 1965 abolished immigration quotas based on national origin and led to an increase of migrants from South Asia, forever changing the racial demographics of the U.S. Because this Act prioritized immigrants with either direct family ties to current Americans or with high levels of scientific educations, most South Asians allowed to immigrate at that time were professionals. Since then, the demographics of South Asian America have also become more diverse: documented and undocumented immigrants, refugees, second, third, and fourth- generation South Asian Americans now comprise this community.

Throughout this history, South Asian Americans have contributed in several fields of civic life. South Asian American entrepreneurs have made a mark in different ways on the business world, from the earliest immigrants opening general stores in the Bay Area to tech innovators who have shaped Silicon valley. In the past decade alone, South Asian American artists and entertainers have become a more visible presence in American media. Cultural practices of the communities, such as food, yoga, classical music, Bollywood, and more have gained followings among a wide range of Americans. In politics, South Asians have made an impact as both elected leaders and grassroots organizers as they address problems within and external to their own community. After the events of September 11, 2001, in particular, South Asians -- primarily Muslims and Sikhs -- have been the victims of religious and racial profiling and violence. In response, political organizations have rallied around to bring awareness to the issue and defend the rights of immigrants. As the South Asian American population grows, it builds off the daily lives and major accomplishments of their predecessors. We invite you to learn about a key part of American and global history and contribute to it.