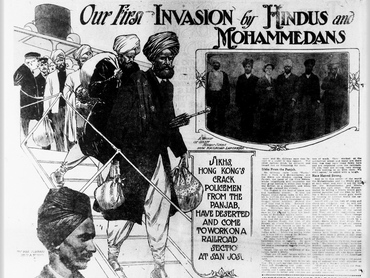 "Our First Invasion by Hindus and Mohammedans" (1906)

Our First Invasion by Hindus and Mohammedans

Sikhs, Hong Kong’s Crack Policemen from the Panjab (sic), Have Deserted and Come to Work on a Railroad section at San Jose

To speak a language which one had spoken as a child; to forget that language and learn it again as an unknown tongue, then not to have heard it spoken for twenty years; and then again to plunge into its trial for a newspaper interview was my peculiar task last Sunday.

The week before sitting in the lobby of the St. James Hotel, San Jose, with my friend E.K. Johnston, the managing editor of the Mercury, I saw pass before the windows some twelve to fourteen Hindustanis.

“What are those fellows doing here,” I inquired.

“They are working on the railroad,” replied Johnston. “The Mercury had something about them.”

I have seen a Hindustani at rare intervals in this city. Indeed, before the disaster, whenever on happened in town I was hunted up and, when seen was told that I was their mother and their father and that they were hungry and in distress. The fact that I was an Englishman who had lived in India was to them guarantee of protection. One wretched Hindu was for years a tamale peddler on Kearny street; another opened a séance parlor on Ellis street where mysteries were unfolded at the rate of a dollar; another studied medicine and disappeared as mysteriously as he came.

This man had been in Japan and professed a great admiration for the Japanese. He told me a singular story.

“Japan,” he said, “loved the Hindus and in the last few years they have sent us invitations to go to Japan and teach them all about our religion. We go to them as teachers and from there I came here. We worship the same god, Buddha, but the Japanese have strayed from the teachings of the Great God and they wish to return to the ancient religion.”

Old teachings are forgotten not easily. A few years of Government service in India aroused my suspicions, and I asked my apparently innocent friend if the Japanese did not evince interest in the relations that existed between the natives and the authorities.

He confessed they did.

A few months later I received a letter from India in which the writer voiced his fears over the growing friendliness between the Japanese and the Hindustanis.

“It is not an augury for good,” he wrote. “They are up to mischief.”

Then came the war; and again the same person wrote:

“The natives are strangely agitated over the war. I have long declared that the Russians are not to be feared, for which I have earned the cordial dislike of every soldier in India. Much as I dislike Russia, I hate the idea of being whipped by an Asiatic, for it has made the natives unbearable and the cry is revived, ‘Asia for Asiatics.’”

The Hindu in America

In India the white man is dominant and the native a subject, and has to behave like a subject. He dare not appear in your presence without a turban, and he must be barefooted.

In America he greets you as an equal, and if you want to talk to him you must take your medicine.

He may use “ap” for a minute, but he lapses into the familiar “toom,” “thou,” which would be an insult in his own land.

All this I knew. But when I first saw these Hindustanis walking down First street in San Jose their red, green and yellow turbans, and saw that some had their military jacket worn by the Hongkong police, and that all had the stride of the soldier, my heart warmed to them, for the spectacle suddenly carried me back to India; brought vividly to me the sight of her groves, her temples, her mosques, her streets swarming with life, and that army which made possible a Duke of Wellington, a Havelock, a Colin Campbell, a Nicholson, and last, but equaling them in fame and soldierly quality, Lord Roberts of Kandahar.

It gave me a touch of homesickness, these natives in San Jose, and I recalled the words of an Englishman I met years ago in Hongkong. He was born in India, was the son of a British general, and the grandson of an Earl.

“Do you know,” he observed, “that one feels an affection for the land where one saw the light? I have not been in India since a baby, but these Sikhs,” pointing to the police, “arouse in my heart a desire to see India.”

“Let us go back,” I suggested. “No, you go back. I am going with the Chinese government. Don’t, don’t go to America. I have been in Australia, and where the English language is spoken they work you mighty hard.” And he set his face toward to Orient and I to the Occident. He turned his back on hard work and I faced it. Little did I think then that years after these self-same Sikhs who police Hongkong would be seeking the Occident – perhaps without warning that where the English language is spoken men are made to work “mighty hard.”

San Jose may be a small town, but if you want to find Hindustanis in that town the task will present difficulties. I might have hunted all day had it not been for Police Officer John Hamburg, who directed me to the house of J.J. Gilleran on West San Carlos street, who has in his employ “a pukka native,” as the phrase goes.

As I entered the garden a man came forward, whom I recognized as a pure Hindustani, and I greeted him with the words, “Toom Hindustani admi tha.”

“Johan Huzoor,” and I was launched into the language I had unconsciously learned, forgotten and learned again and again forgotten.

Ismail is a Mohammadan, born on the West Coast, and Bombay is his home. He has led an adventurous life for a Hindustani, for he took ship and went to London, then to Glasgow and again taking ship he rounded the Horn and arrived in San Francisco. He does not like this city, and so started on a voyage of climatic discovery and found San Jose. He arrived in the Garden City last February and has been with J.J. Gilleran since, tending his horses and doing odd jobs, sometimes working as a contractor, making money and winning the affections of those whom he meets.

When he arrived in San Jose his knowledge of English was limited, but now he converses fluently and has a mastery of slang. He knows what “88” means and says “skidoo” to the dog.

“I don’t like San Francisco,” explained Ismail. “It is too cold and too foggy,” and he shivered at the remembrance of our bracing and also nipping airs. “This climate is the best in the world – never too cold and never too hot – and where a man can labor all the time. I do all kinds of work. I made a contract yesterday and made $8 in one day taking down a barn and I traded the other day and made $4. On Sunday there is no work, so I rest.”

Now a Muhammadan who is a good Muhammadan never touches spirituous liquor, and Mr. Gilleran says that Ismail is a model in this respect. The other natives drink, he declares, and Ismail has no friendship for them.

Sikhs from the Panjab (sic)

Mr. Gilleran calls then “Turks.” Now, a Turk is a Muhammadan, and the Sikhs are Hindus, coming from Panjab, the Land of the Five Rivers, whose inhabitants still remember the four great battles in which they fought the British to a standstill, and when each side declared the victory.

The Panjab is a land of brave men and handsome women. It was the Panjab which saved India to the British in 1857-58, the days of the mutiny, when Roberts, then a lieutenant in the Bengal Horse Artillery, showed the stuff that was in him. Roberts was in Peshawar, Panjab, then a frontier post. Nicholson was there too, and the Panjabs to this day put their ears to the ground to hear the hoofbeats of Nicholson sahib’s horse.

It is the land where warriors are bred, and the greatest of her warriors was Ranjeet Singh, the Lion of the Panjab, at whose funeral pyre 500 of his wives were burned to add to the sorrow that was felt at his death.

Here in the Panjab is recruited the Indian army. When the mutiny broke out it was the cry among the British:

“How about the Panjab?”

Ismail, like all the followers of Mahomet, hates a Hindu.

“They are all mad” (pugis walla), he explained, which means more than insane.

“Yes.” he says, “they were in the police. No. I can’t say that they deserted. They left Hongkong and came over here. First they went to British Columbia and I came down here because the climate is better and you can get lots of work. They worked at the quicksilver mines and many are there now, but they have come down here and are employed upon the railroads. Oh yes; they are strong, very strong. I have nothing to do with them. We don’t agree,” he added with a laugh.

Ismail will eat the flesh of cows and sheep and chickens, but he will not touch the meat of a pig. The Sikhs will eat no flesh whatsoever, now will they handle the flesh of the sacred cow. They are strict vegetarians and live in community form. Their lineage is shown in their names, for no man not of the warrior caste would be a Singh – Narin Singh, Sher Singh, Pertah Singh, and Toluk Singh, and among these warriors is a priest, Adlai Swami.

Perhaps these warriors, whose ancestors have fought in many a war, carry with them a priest so that they stray not too far from the teachings of Buddha.

The priest, true to his faith, does not work. The warriors who have worn the British uniforms now work upon the Interurban Railroad, and they are said to be good workmen. For their strength and their courage all who know them entertain respect, and as an American said:

“I have seen them sling a 200-pound bag of sulfur over their shoulder as if it were a feather pillow.”

“Will you ever go back to the Panjab?” I asked one of them.

“If it is the pleasure of God,” he piously answered.