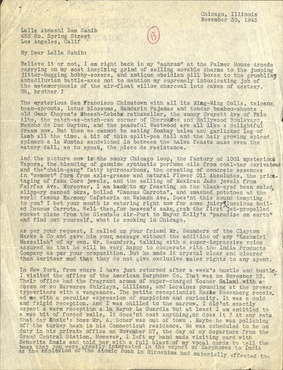 Blieve it or not, I am riht back in my “ashram” at the Palmer House Arcade carrying on my most inspiring grind of selling moveable charms to the jumping jitter-bugging bobby-soxers, and antique obsidian pill boxes to the grumbling antediluvian battle-axes not to mention my supremely intoxicating job of the metamorphosis of the air-float willow charcoal into cakes of ecstasy. Oh, brother !

The mysterious San Francisco Chinatown with all its Ming-Ming Dolls, taipans, bean-sprouts, lotus blossoms, Mandarin Pajamas and tender bamboo-shoots , old Omar Khayam’s Sheesh-Kebaba rathskeller, the sunny Everett Ave of Palo Alto, the catch-as-catch-can corner of Cherokee and Hollywood Boulevard, Rancho de Doc Guyton, and the peaceful Westwoodare all like a delightful dream now. But then we cannot be eating Bombay halwa and garlicked leg of lamb all the time. A bit of thin split-pea dall and the hair growing spiced spinach a la Mumtaz sandwiched in between the halwa feasts make even the watery dall, so to speak, the piece de resistance.

And the picture now is the smoky Chicago loop, the factory of 1001 mysterious Vapors, the blending of genuine synthetic perfume oils from the coal-tar derivatives and the”chain-gang” fatty hydrocarbons, the creating of concrete essences in “cemnet” form from axle-grease and natural Flower Oil Absolutes, the price-taging of fake Coro jewels, and the selling of Mexican Jade Jewels from Fairfax Ave. moreover, I am back to my feasting on the black-eyed bean salad, slippery canned okra, boiled “Daucus Carrota”, and smashed potatoes at the world famous Harmony Cafeteria on Wabash Ave. Does’nt this sound tempting to you? I bet your mouth is watering right now for some juicy luscious boiled Daucus Carrota. Well then,for heaven’s sake, graab the first jet-propelled rocket plane from the Glendale Air-Port to Mayor Kelly’s “paradise on earth” and find out yourself, what is cooking in Chicago.

As per your request, I called upon your friend mr. Saunders of the Clayton Marks & Co and gave him your message without the addition of any “Kashmiri Massallah” of my own. Mr. Saunders, talking with a super-impressive voice assured me that he will be very happy to cooperate with the India Products Company as per your proposition. But he made it crystal clear and clearer that Amritsar mud that they do not give exclusive sales rights to any agent. In New York, from where I have just returned after a week’s hustle and bustle. I visited the office of the American Earphone Co. That was on November 23. Their office had the fragrant aroma of super-charged Kosher Salami with a dozen or so Marwaree Shirleys, Lillians, and Loraines pounding at the prewar typewriters with a vengeance. The petite receptionist Rosie Rosenberg received me with a peculiar expression of suspicion and curiosity. It was a cold and frigid reception. And I was chilled to the marrow. I did’nt exactly expect a warm reception a la Mayor La Guardia but at least I am entitled to a wee bit of forced smile. It does’nt cost anything, or does it ? At any rate that day Rosie’s boss Mr. A . Scher was out of town . Maybe he was polishing off the turkey hash in his private office on November 27, the day of my departure from the Grand Central Station. However, I left my hand made visiting card with Senorita Rosie and told her with a full blast of my vocal cords to tell the boss that you were greatly interested in the export of Earphones to India as the explosion of the Atomic Bomb in Hiroshima had materially effected the auditory canals and tympanic membranes of the 390 million people of India. And this potential market for the American Earphone cannot be sneezed at.

About a month ago Senor Roy Clark and Senora Gloria Clark arrived in Chicago with a bang. The day after their arrival here, we drove out to Milwaukee and delivered Senora Clark to the Marquette University Dormitory. The third day, in my less than insignificant hacienda, Senor Clark cooked the most delicious chicken and rice puff with a dash of the love-spice. The aroma of that mysterious pillaf was delightful and just too divine. Dr. Hossain was overpowered by uts sharply appetizing Vapors and did justice to the yellow pillaf as he only can do after”washing his hands”. The test of the pudding is in the taste thereof.

Dr. hossain has been criss-crossing very religiously through the Mid-Western hick towns suck as Prairie-du-Chien, Menominee, Oscaloosa, Tuscaloosa, Iron Mountain, Walla Walla, etc, etc, with his messafe of four freedoms, Purna Swaraj, complete independence, Azad Hindustan, debating, and answering all sorts of questions with his usual intensity, force and convincing form. At the present time his “dowlat khannah” is a small room in the Plamer House just above my “ghareeb Khannah”.

Madame Fatso is still sprawled on the hot sand of Miami Beach for the liquidadtion of the surplus stock of fatty tissue which she accumulated during the war time prosperity. I hope that she is in the class of Heddy La Mar by now.

In New York, I met His Highness Mossa Rawjee, his young brother Ameer Ali Rawjee, and Mrs. Rawjee. I had my Thanksgiving Dinner and also another special dinner at the charming apartment of the Rawjees. Before our Thanksgiving Dinner, Moosa and I had a long walk through the romantic Central Park and we talked about Hollywood Treasures, Mr. Woo, Mercedes, Betty, Bob, Ray, the Cherokee Apt, love-spice, mouldy ginger, ginger ale, coca cola etc. That long walk gave us a pretty sharp appetite . Mrs. Rawjee was looking fine and she is improving by leaps and bounds.

I also had the extreme pleasure of attending an aesthetic “Mujra” performance given by the charming Punjabi dancer Lilavati at the “Times Hall in New York. Her inspiring Flower (Gulab) Nautch, the classical Katha, the tantalizing New Saree dance weer all performed in a superb manner and masterful style, with elegance, grace, and charm. And her singing of Miss Dularee’s famous song “rum walla run lay gaya” in a sweet and melodious voice transported me right back to the Lahore Shalimar Garden. Wah! Wah! Subhan Allah! You really missed something. But Moosa and his brother thought that Lilavati is just a lot of “nakhrah, more nakhrah, and takhrah. Maybe so but what good would be Lilivati without that Lahoree nakhrah. Her large deer eyes, her artistically shaped hands, her “surahee dar” neck, her delicate waist and her pink tootsies were all performing elegantly in complete unison with the “kharak” of taboola. I cannot find words to do justice to the talent of the artistic Lilivati. Suffice it to say that the “Mujrah” was divinely intoxicating.

Mrs. Pundit is in town today. She is scheduled to give me a radio talk over Station WGN, Chicago Tribune, tomorrow at 1.30 and the same evening she is to speak in Winetka. One Monday evening she will speak in Evanston. Maybe Mrs. Dienner will hear her in evanston. On December 5, she will speak in Chicago at the famous Temple Sholom, and on December 7 she will appear in Boston. She certainly is going to town with her lecture engagements. More power to her.

How is Betty getting along wit her letter writing? How is Ray feeling these days and how is Bob’s Vault business? I hope he is dishing them out at the rate of a dozen a day. How are the Nusrees + the [?]. My hellos to everybody + my special hello to your [?]