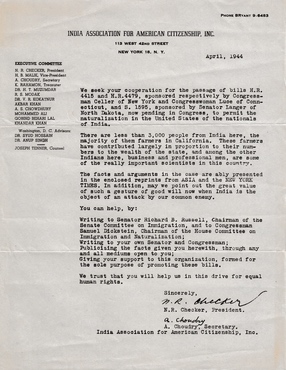 DESCRIPTION
A form letter dated April 1944 from the India Association for American Citizenship, Inc. asking the addressees for their support of Bills H.R. 4415, H.R. 4479, and S.1595, legislation to allow naturalization of Indian nationals in the US. The original letters included enclosures of two articles addressing the nature of the cause (see https://www.saada.org/item/20151005-4497).

We seek your cooperation for the passage of bills H.R. 4415 and H.R.4479, sponsored respectively by Congressman Celler of New York and Congresswoman Luce of Connecticut, and S. 1595, sponsored by Senator Langer of North Dakota, now pending in Congress, to permit the naturalization in the United States of the nationals of India.

There are less than 3,000 people from India here, the majority of them farmers in California. There farmers have contributed largely in proportion to their numbers to the wealth of the state, and among the other Indians here, business and professional men, are some of the really important scientists in this country.

The facts and arguments in the case are ably presented in the enclosed reprints from ASIA and the NEW YORK TIMES. In addition, may we point out the great value of such a gesture of good will now when India is the object of an attack by our common enemy.

You can help, by:

Writing to Senator Richard B. Russel, Chairman of the Senate Committee on Immigration, and to Congressman Samuel Dickstein, Chairman of the House Committee on Immigration and Naturalization;
Writing to your own Senator and Congressman;
Publicizing the facts given you herewith, through any and all mediums open to you;
Giving your support to this organization, formed for the sole purpose of promoting these bills.

We trust that you will help us in this drive for equal human rights.