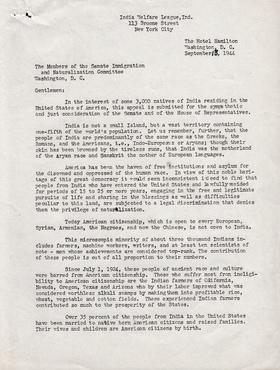 DESCRIPTION
Letter dated September 13, 1944 written by Ramlal B. Bajpai, Vice-President of India Welfare League, Inc to Senate Immigration and Naturalization Committee in regards to the naturalization of Indian nationals in the United States. The letter cites several reasons in favor of amending section 2160 of the revised statutes to permit approximately 3,000 Indians to become American citizens as provided in S. 1595.

The Members of the Senate Immigration
and Naturalization Committee
Washington, D. C.

In the interest of some 3,000 natives of India residing in the United States of America, this appeal is submitted for the sympathetic and just consideration of the Senate and of the House of Representatives.

India is not a small Island, but a vast territory containing one-fifth of the world’s population. Let us remember, further, that the people of India are predominately of the same race as the Greeks, the Romans, and the Americans, i.e., Indo-Europeans or Aryans; though their skin has been browned by tireless suns, that India was the motherland of the Aryan race and Sanskrit the mother of European languages.

America has been the haven of free institutions and asylum for the disowned and oppressed of the human race. In view of this noble heritage of this great democracy, it would seem inconsistent indeed to indeed to find that people from India who have entered the United States and lawfully resided for periods of 15 to 25 or more years, engaging in the free and legitimate pursuits of life and sharing in the blessings as well as difficulties peculiar to this land, are subjected to a legal discrimination that denies them the privilege of naturalization.

Today American citizenship, which is open to every European, Syrian, Armenian, the Negroes, and now the Chinese, is not open to India.

This microscopic minority of about three thousand Indians includes farmers, machine workers, writers, and at least ten scientists of note – men whose achievements are considered top-rank. The contribution of these people is out of all proportion to their numbers.

Since July 1, 1924, these people of ancient race and culture were barred from American citizenship. Those who suffer most from ineligibility to American citizenship are Indian farmers of California, Nevada, Oregon, Texas, and Arizona who by their labor improved what was considered worthless alkali swamps by making them into profitable rice, wheat, vegetable, and cotton fields. These experienced Indian farmers contributed so much to the prosperity of the States.

Like all peoples from other lands, natives of India in the United States have shown qualities of cultural adaptation and social assimilation and have proved themselves to be law abiding and loyal to the democratic institutions of the United States.

Since these Indian residents have voluntarily given up their former dociles and cast their lots for better or worse with the land of their adoption, in the name of human justice and American sense of fair play it is only just that they be granted the right to become naturalized and saved from discriminating limitations due to the national origina clause.

We most respectfully bring to your attention the plight of the natives of India residing here and the need for the decent rectification of their situation by their disbarment from the naturalization privileges and seek all necessary legislative measures in their behalf.

Since arbitrary discriminations are becoming the rule of our times, it is utterly unworthy of American tradition and professions of melting-pot democracy to give them sanction here. Those people from India and their families must, in fact, live and die in the United States and their weal and woe depend upon the action of the American Government. They have already experienced undeserved suffering as aliens and it is time to heed the case of this defenseless minority group in the light of justice, tolerance, and expediency.

A delegation officially appointed by the India Welfare League, headed by Mubarek Ali Khan, made a tour throughout the country and secured the support of various Governors, Mayors and other American citizens in public and private life. We have in our possession and exhibit herewith a petition signed by them.