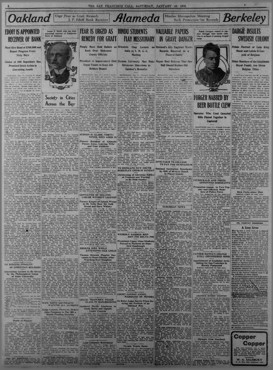 DESCRIPTION
An article from the January 18, 1908 issue of the San Francisco Call describing a public protest by sixteen UC Berkeley students at a speech on India by J. Lovell Murray, a Christian evangelist who had worked in India. According to the article, a Stanford student heard Murray's lecture about India, found it offensive, and tipped off Indian students at UC Berkeley. When Murray came to lecture in Berkeley, he was confronted by sixteen "Oriental" students. After Murray spoke, Girindra Mukerji and six other students spoke up to critique Murray's comments about Hinduism, and denounce British rule in India.

As of 2013, the Berkeley South Asian Radical History Walking Tour described the incident as the earliest-known South Asian protest in the city of Berkeley, and possibly one of the earliest South Asian campus protests in the United States.

BERKELEY, Jan: 17.— Sixteen Hindu Students at the University of California asserted the right of free speech so strenuously last night at a Young Men's Christian association meeting at Stiles hall that H. R. Gaines, president of the association, was compelled to close the session in order to shut off the flow of oriental eloquence.

The squad of Hindus attended the meeting to protest against an address which was delivered by J. Lovell Murry of the international Young Men's Christian association committee. Murry [sic] in the course of a talk on the "Awakening of the Orient," delivered several days ago at Stanford university, aroused the resentment of one of his Hindu hearers there by his comments on the religious conditions in Hindustan. This Stanford man promptly advised his compatriots at Berkeley that Murry [sic] was to speak here and that they should protest against his utterances. Led by Yirindra Mukerji, a student who had lately received his master's degree, they waited upon Murry [sic] with a request that he censor the part of the address which was objectionable to them and was said to reflect upon the moralities of Hindu priests.

Murry [sic], who had spent much time in India, declined to heed the Hindus' request. His lecture, unexpurgated, was delivered, and prominent in front seats at the hall were the 16 protesting orientals.

As soon as Murry had concluded Mukerji was granted permission to reply. He denounced British rule in India and declared that the Hindustani desired political independence, and that their religious affairs were not at fault.

In rapid succession a half dozen more of the dark skinned auditors plunged Into the breach, until President Gaines called a halt. As the meeting dispersed some one remarked that Speaker Murry [sic] had made good on the title of his address.