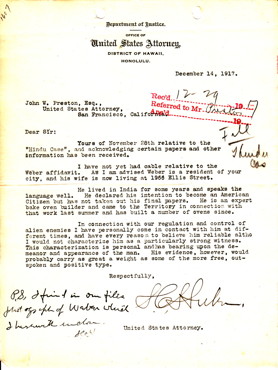 Letter from the United States Attorney of the District of Hawaii to John W. Preston

DESCRIPTION
Letter from the U.S. Attorney of the district of Hawaii to John W. Preston assessing a possible witness for the Hindu-German Conspiracy trial. The witness was described as having lived in India for years, declaring an intention to become an American citizen, and also not being a particularly strong witness.

Yours of November 28th relative to the "Hindu Case", and acknowledging certain papers and other information has been received.

I have not yet had cable relative to the Weber affidavit. As I am advised Weber is a resident of your city, and his wife is now living at 1966 Ellis Street.

He lived in India for some years and speaks the language well. He declared his intention to become an American Citizen but has not taken out his final papers. He is an expert bake oven builder and came to the Territory in connection with that work last summer and has built a number of ovens since.

In connection with our regulation and control of alien enemies I have personally come in contact with him at different times, and have every reason to believe him reliable altho I would not characterize him as a particularly strong witness. This characterization is personal and has bearing upon the demeanor and appearance of the man. His evidence, however, would probably carry as great a weight as some of the more free, outspoken and positive type.

P.S. I found in our files photograph of Weber which I herewith enclose.