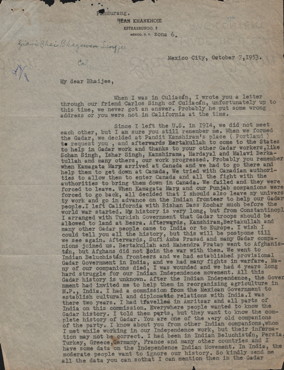 DESCRIPTION
Letter from Gadar member Pandurang Khankhoje to Bhagwan Singh Gyanee, addressed from Mexico City and dated October 7, 1953. In the letter, Khankoje narrates key incidents from his life, beginning with the formation of Gadar with other members, including Gyanee, Pandit Kanshiram, Sohan Singh, Ishar Singh, Har Dayal, and Malavi Barkatullah; his involvement with the Komagata Maru incident in Canada; and, his subsequent departure from California with Bishan Dass Kochar to Constantinople. Later, Khankoje describes his involvement in establishing a provisional Gadar Government in India, his work after Indian independence in "reorganizing agriculture" in Madhya Pradesh, and his work with the Mexican government to "establish cultural and diplomatic relations with India." By the end of the letter, Khankoje requests Gyanee to send information about the history of the Gadar movement for fear that "the history of our movement should not get lost."

When I was in Culiacán, I wrote you a letter through our friend Carlos Singh of Culiacán, unfortunately up to this time, we never got an answer. Probably he put some wrong address or you were not in California at the time.

Since I left the U.S. in 1914, we did not meet each other, but I am sure you still remember me. When we formed the Gadar, we decided at Pandit Kanshiram's place (Portland) to request you, and afterwards Bertakullah to come to the States to help in Gadar work and thanks to your other Gadar workers, like Sohan Singh, Ishar Singh, Kanshirama, Hardayal and Malavi Berkatullah and many others, our work progressed. Probably you remember when Kamagata Maru arrived at Canada and we had to go there and help them get down at Canada, We tried with Canadian authorities to allow them to enter Canada and all the fight with the authorities to bring them down in Canada. We failed and they were forced to leave. When Kamagata Maru and our Punjab companions were forced to go back, all decided that I should also leave my university work and go in advance of the Indian fronteer to help our Gadar people. I left California with Bishan Dass Kochar much before the world war started. My history is very long, but from Constantinople I arranged with Turkish Government that Gadar troops should be allowed to land at Besra. Afterwards, Kanshiram, Bertakullah and many other Gadar people came to India or to Europe. I wish I could tell you all the history, but this will be postpone till we see again. Afterwards, Sufi Amba Prasad and many Gadar companions joined us. Bertakullah and Mahendra Pratap went to Afghanistan, but Afghans did not join the war with them. We went to Indian Beluchistan fronteers and we had established provisional Gadar Government in India, and we had many fights in warfare. Many of our companions died, I was wounded and we had 4 years long hard struggle for our Indian Independence movement. All this Gadar history is unknown. After the Indian Independence, the Government had invited me to help them in reorganizing agriculture in M.P., India. I had a commission from the Mexican Government to establish cultural and diplomatic relations with India. I was there two years. I had travelled in Amritsar and all parts of India on this commission. Everywhere people wanted to know the Gadar history. I told them parts, but they wanted to know the complete history of Gadar. You are one of the very old companions of the party. I know about you from other Indian companions, whom I met while working in our Independence work, but their information may not be correct. I had been in Indian Beluchistan, Persia, Turkey, Greece, Germany, France and many other countries and I have some data on the Independence Indian Movement. In India, the moderate people want to ignore our history. So kindly send me all the data you can so that I can mention them in the Gadar history. Some people I know are giving wrong data. So please in the name of the Indian martyrs killed in the warm, I request you to send me the data you can, about you, the people who were working with you. People of India are anxious to know about you all. But they will be pleased to know all your work. We are getting old and the history of our movement should not get lost. Can you give me a list of the old timers of the Gadar. I could write them.

With my best wishes for your good health and prosperity.