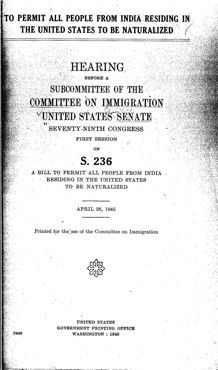 Bill To Permit All People From India Residing in the U.S. to Be Naturalized (1945)

DESCRIPTION
Transcript for the 1945 U.S. Senate hearing to discuss Bill S. 237, which would permit all people from India residing in the United States to be naturalized. The meeting was held on April 26, 1945, and the Bill was introduced on January 10, 1945 by North Dakota Senator William Langer. The transcript record statements made by Edward J. Shaughnessy (Assistant to the Immigration and Naturalization Service Commissioner), and John M. Cooper (Anthropology Professor at Catholic University, D.C.). Also included in the file were documents and testimonies to support the bill, including statements from the India Welfare League (including several separate statements by League president Mubarek Ali Khan); a petition signed by leading American educators, businesspeople, writers, and publishers; a statement about the Watumull Foundation; and, various articles from U.S. newspapers in support of the bill.

Interestingly, according to Shaughnessy’s testimony, as of June 30, 1943 there were 4,060 noncitizen East Indians and 810 native-born.