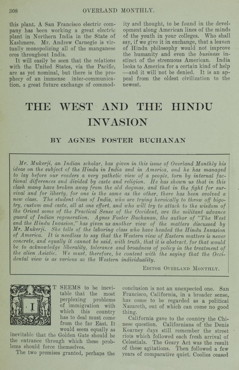 Agnes Foster Buchanan, "The West and the Hindu Invasion" (1908)

DESCRIPTION
In "The West and the Hindu Invasion," an article from the April 1908 issue of Overland Monthly, Agnes Foster Buchanan writes about the "Hindu Invasion" as the "latest racial problem" to impact the West coast, following the earlier migrations of Chinese and Japanese. Buchanan writes about the "Hindu look[ing] upon the ocean as a thing accurst," and the gradual rise of the diaspora beginning with the English importing Hindu policemen and soldiers into Hong Kong. Buchanan reports of her experiences meeting a Sikh named Binga Singh employed in an iron factory, who claims to be a Brahmin. Buchanan writes that the "Hindus make good, steady workmen, though on account of their peculiar endurance." In another scene, she describes two Hindus standing by the Ferry Building in San Francisco, observing the soldiers. Buchanan quotes them: "'What are these?' said one in his native tongue. 'I suppose they are 'torah logue' (soldiers)', answered the other." The article ends with the author arguing against Hindu emigration, writing that "no one part of [the earth] will comfortably accommodate both branches of the Aryan family."