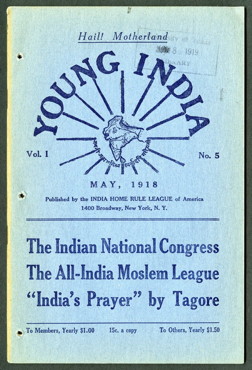 DESCRIPTION
The May 1918 issue of Young India (Vol. 1, No. 5) opens with a note from the manager N.S. Hardiker, apologizing for delays in posting, and a note that "copies of 'Young India' could be had from any big book store in the city of New York, or from any leading Hindus in any city of the United States." The opening editorial contains assorted news items on subjects ranging from British Prime Minister David Lloyd George's appeal to India to resist German empire in Asia to the Labour Party's policies towards India.

The contents of the issue include a poem by Rabindranath Tagore titled "India's Prayer," as well as reports on the 32nd session of the Indian National Congress and the 10th Session All-India Moslem League. The report of the All-India Moslem League describes the league as an initiative of the "Anglo-Indians in a way to oppose the Indian National Congress." A piece titled "Mr. Montague in Purdah" reprints a letter from Abadi Bano Abdul Ali to Uma Nehru.