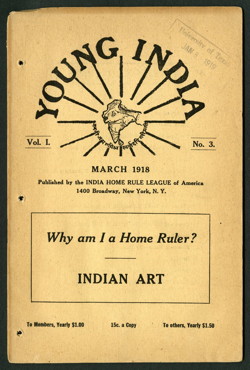 DESCRIPTION
The March 1918 issue of Young India (Vol. 1, No. 3) begins with a series of editorials responding to U.S. President Woodrow Wilson's "Fourteen Points" speech, in which he underscored the cause of the war having "roots in the disregard of the rights of small nations and of nationalities which lacked the union and the force to make good their claim to determine their own allegiances." In another section titled "Appeal to President Wilson," the editors describe the ill treatment of Jodh Singh, a defendant who was charged with conspiracy in the Hindu-Germany conspiracy trial, while also distancing themselves from the case itself.

Several other essays and reprints are included in the issue: Lala Lajpat Rai's "Why Am I a Home Ruler?"; J.T. Sunderland's "India's Right to Home Rule"; Henry Hotchener's "League for World Liberation," K.D. Shastri's "Peace and Democracy"; as well as an obituary for William Wedderman, chairman of the British Committee of the Indian National Congress in London. The issue also includes hand-drawn diagrams of the "Average Income and Average Taxes of Principal Countries in the World," "India's Mortality," and "Death Curve Chart" to highlight the effects of British colonialism in India.