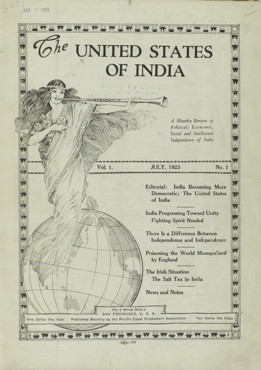 DESCRIPTION
The inaugural issue of The United States of India, dubbed "A Monthly Review of Political, Economic, Social and Intellectual Independence of India," was published in July 1923 from the Gadar Party headquarters in No. 5 Wood Street, San Francisco. The title "Pacific Coast Hindustani Association" was used in place for Gadar Party.

The issue includes the following editorials: "Every Day in Every Way Is India Becoming More and More United and Democratic," "The United States of India," "India Progressing Toward Unity," "Fighting Spirit Needed," "There is a Difference Between independence and Independence," and "Poisoning the World Monopolized by England" (a reprint from The Irish World). Shorter writings include a printing of Irish trade union activist James Larkin's "message to london Irish," a letter on the Irish Free State from Indian Member of Parliament Shapurji Saklatvala to the House of Commons. News items touch on the Salt Tax in India, Russian-English relations, Walton Newbold, and the proposal for the Indian Independence Party led by Maulana Azad Subhani. The opening page contains a list of "Facts and Figures" from British India's 1922 year book. The names of individual contributors are nowhere mentioned.