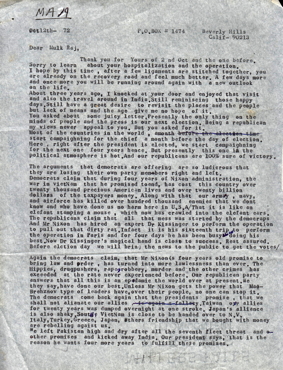 DESCRIPTION
Letter from Abnashi Ram to M.R. Ahuja dated October 12, 1972. The letter conveys well wishes to M.R. Ahuja after a surgical operation. It also contains his political views regarding President Nixon. He states, "When the next election is over and after Nixon’s victory, he is going to bring the peace that he definitely promised."

Thank you for Yours of 2 nd Oct and the one before.
Sorry to learn about your hospitalization and the operation.
I hope by this time, after a few ligaments are stitched together, you are already on the recovery road and feel much better. A few days more and once more you will be running around again with a new outlook on the life.
About three years ago, I knocked at your door and enjoyed that visit and also the travel around in India. Still reminiscing these happy days. Still have a great desire to revisit the places and the people but lack of means and the age give me no hope of it.
You asked about some juicy letter. Presently the only thing on the minds of people and the press is our next election. Being a republican my views never appeal to you. But you asked for it.
Most of the countries in the world, a month before the election time start campaigning for the chief a month before the day of election. Here, right after the president is elected, we start campaigning for the next one four years hence. But presently this one i& the political atmosphere is hot. And our republicans are 100% sure victory.

The arguments that democrats are offering are so ludicrous that they are losing their own party members right and left.
Democrats claim that during four years of Nixon administration, the war in VietNam that he promised to end, had cost this country over twenty thousand precious American lives and over twenty billion dollars of the taxpayers money. Along with that our army, navy, and airforce has killed over hundred thousand enemies that we dont know and who have done us no harm here in U.S.A/ That it is like an elefant stamping a mouse, which now has crawled into the elegant ears.The republicans claim that all that mess was started by the democraps And Mr Nixon has hired an expert Dr Kissinger to perform the operation to pull out that dirty rat. In fact it is his sixteenth trip to perform the operation in Paris and for four days he has been busy > doing his best. Now Dr Kissinger’s magical hand is close to success. Rest assured. Before election day we will bring the news to the public to get the votes/

Again the democrats claim that Mr Nixon (s four years old promise to bring law and order, has turned into more lawlessness than ever. The Hippies, drug pushers, rape, robbery, murder and the other crimes has exceeded at the rate never experienced before. Our republican party answers that all this is an epidemic the world over at present. We they say, have done our best. Unless Mr Nixon gets the power that Mao-Brehznov type of leaders have, over their people, no one can stop it. The democrats come back again that the president's promise that we shall not alienate our allies, is again a fallacy. Taiwan our allies for twenty years was dumped overnight at one stroke. Japan’s alliance is also shaky. Southe VietNam is close to be handed over to N.V.
Italy, Turkey, Greece, Japan, others friendship that we bought with money are rebelling against us.
We left Pakistan high and dry after all the seventh fleet threat and o- other promises and kicked away India. Our president says, that is the reason he wants four more years to fulfill these promises.


The democrats then say, that well in 1948 we kicked away China and forced them to accept communism, now the same with %00 millions of Indians. We are pushing the into the lap of Russian Bear. Dr Kissinger says, so what? Didn't I bring China back. After clearing all the mess with honourable victory from Viet Nam, we will rush all that arms ammunition and the air force to Pakistan and we will bring back India to senses too. Just give Mr Nixon another four years and Kissinger will perform some more miracles. You have already seen, Dr Kissinger continues, how China and Russia are now on our side. They are on their knees to get the bread and aeroplanes from us.

Mr Nixon always stands by his promise That by strength and only that way we can make friends. Remember? says Henry.
So my friend, these losing democrats are always nagging about one thing or the other, such as inflation, corruption the government and such things. They dont realize that democracy has some disadvantage too. They, in their time, never done anything about it.

When the next election is over and after Mr Nixon’s victory, he is going to bring the peace that he definitely promised. Not only in U.S.A but the world over. mark these words, my friend.
Caesars, Kaisers, Napoleans, Hitler, Woodrow Wilson to Franklyn D Roosvelt tried but failed. Our past four years record shows that President Nixon can and will, as we will give him the powers to accomplish that, the power that all those previous leaders never had, all put together.
Now returning to India, your indra and Indian army did a splendid job to save India from Red China. Unfortunately, Indra had to get under the shelter of Red bear. Thereby losing the friendship of a friend and benefactor of U.S.A
There is an ocean of love between the people of USA and India.
Historically, economically, by language and means of communication even socially and racially too ties have bsen strong and must remain so Nixon is not USA and Indra is not India. They are passing phase of history. Dr Kissinger is s paper puppet, like a firebug going around a candle with days limited.
Let some unselfish leader in India rise to the occasion and keep the bridge of friendship healthy and strong in time and right now. God loving people of India cannot afford to fall in the lap of Godless, soul less Red Opportunists.
First step and it may seem difficult, but important is to bring India stray brother PAK with love and reason back to the fold.
Let the re be no mistake in the minds of India Pak leaders, that in order to keep the home economy going, the biggest and importANT export of the big powers is arms and ammunation. Watch it.
Right after the Viet Nam war is over, Lahore Islamabad and Delhi may become Saigon and Hanoi. IT SHOULD NEVER HAPPEN
Well dear MulkRaj, again hoping you are O.K. by now, and my affectionate regards to you, your family and friend.