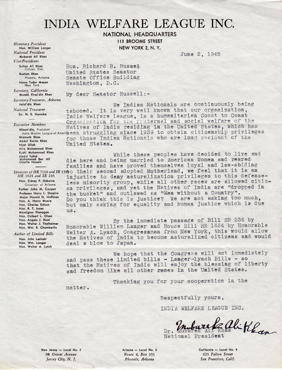 DESCRIPTION
Letter from India Welfare League President Mubarek Ali Khan to Senator Richard B. Russell, chairman of the Senate Committee on Immigration. The letter, on League letterhead, urges Chairman Russell to immediate passage of S.236 and H.R.1624, legislation that would permit all people from India residing in the United States to be naturalized. Senate bill S.236 was introduced by Senator William Langer of North Dakota, who served as honorary president of the India Welfare League. This letter became part of the Committee on Immigration's records regarding S.236.