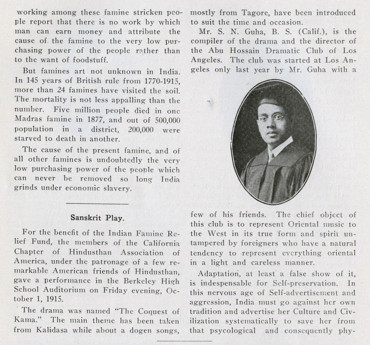 DESCRIPTION
Article from October 1915 issue of The Hindusthanee Student detailing a performance of the Sanskrit play "The Conquest of Kama" at the Berkeley High School auditorium on October 1, 1915. The play was performed by the Hindusthan Association of America and produced for the benefit of an Indian famine relief fund. S.N. Guha, an alumni of the University of California, Berkeley and the director of the Abu Hossein Dramatic Club of Los Angeles, served as the main organizer.

For the benefit of the Indian Famine Relief Fund, the members of the California Chapter of Hindusthan Association of America, under the patronage of a few remarkable American friends of Hindusthan gave a performance in the Berkeley High School Auditorium on Friday evening, October 1, 1915. The drama was named "The Coquest [sic] of Kama." The main theme has been taken from Kalidasa while about a dogen [sic] songs, mostly from Tagore, have been introduced to suit the time and occasion. Mr. S.N. Guha, B.S. (Calif.), is the compiler of the drama and the director of the Abu Hossain Dramatic Club of Los Angeles. The club was started at Los Angeles only last year by Mr. Guha with a few of his friends. The chief object of this club is to represent Oriental music to the West in its true form and spirit untampered by foreigners who have a natural tendency to represent everything oriental in a light and careless manner. Adaptation, at least a false show of it, is indespensable for Self-preservation. In this nervous age of Self-advertisement and aggression, India must go against her own tradition and advertise her Culture and Civilization systematically to save her from that psychological and consequently physical advantage which the trumpeters always get over the unassuming yet resourceful passer-by. Prof. Guha and our boys have understood the principle and while laboring under tremendous odds they are trying ot put it into action for "Actions always speak louder than words."