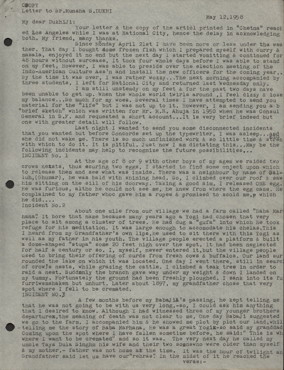 DESCRIPTION
Letter from Bhagwan Singh Gyanee to Munsha S. Dukhi dated May 12, 1958. In the letter, Gyanee describes his illness, presiding over the election meeting of the Indo-American Culture Association. Gyanee sent a brief sketch written for M.R. Ahuja in 1950, when Ahuja was the Consul General in San Francisco. The rest of the letter contains various "incidents," numbered 1 through 7, from Gyanee's life, which were requested by Dukhi. Gyanee concludes, "I have no idea if these are the kind of incidents you asked for… and if you can make anything out of them? BUT here they are."

Your letter & the copy of the articl printed in “Chetna” reached Los Angeles While I was at National City, hence the delay in acknowledging both. My friend, many thanks.

Since Monday April 21st I have been more or less under the weather. That day I bought some frozen fish which I prepared myself with curry and masala, enjoyed it no end but the next day I started vomitting and continued for 48 hours without surcease, It took four whole days before I was able to stand on my feet, However, I was able to preside over the election meeting of the Indo-American Culture Ass’n and install the new officers for the coming year,. By the time it was over, I was rather wozzy… The next morning accompanied by three students, I left for National City and returned last Wednesday only.

I am still unsteady on my feet & for the past two days have been unable to get up. When the whole world twirls around , I feel dizzy and lose my balance… So much for my woes. Several times I have attempted to send you material for the “life” but I was not up to it. However, I am sending you a b “brief sketch” which was written for Mr. M.R. Ahuja in 1950 when he was Consul General in S.F. and requested a short account… It is very brief indeed but one with greater detail will follow.

Last night I wanted to send you some disconnected incidents that you wanted but before Concorde set up the typewriter, I was asleep… and she did not wake me. There is so much unfinished work & so little time & strength with which to do it. It is pitiful. Just now I am dictating this… May be the following incidents may help to recognize the future possibilities…

At the age of 8 or 9 with other boys of my agem we raided two crows nests, thus ecuring two eggs, I started to find some onject upon which to release them and see what was inside. There was a neighbour by name of Galluh, (Ghumar), he was bald with shining head. So, I climbed over our roof & saw him sitting on the sill of his doorway. Taking a good aim, I released ONE egg. He was furious, altho he could not see me, he knew from where the egg came. He complained to my father whoc gave him a rupee & promised to scold me, which he did….

About one mile from our village we had a farm called “Baba Marhana”. It bore that name because many years ago a Yogi had chosen that very place to sit among a cluster of trees. He had dug a “gufa” into which he took refuge for his meditation. It was large enough to accomodate his chelas. This I heard from my Grandfather's own lips, he used to sit there with this Yogi as well as my father in his youth. The village people erected a platform & built a dome-shaped “stupa” some 20 feet high over the spot. It had been neglected for half a century or so. I, myself, never entered it, but the village people used to bring their offering of curds from fresh cows & buffalos. Our land surrounded the lake on which it was located. One day I went there, still in search of crows nests, while grazing the cattle. I climbed a teak tree in order to raid a nest. Suddenly the branch gave way under my weight & down I landed on my tummy. Fortunately the ground had been freshly ploughed. I sank into its fu furriwsmshaken but unhurt. Later about 1897, my grandfather chose that very spot where I fell to be cremated.

A few months before my BabaJi’s passing, he kept telling me that he was not going to be with us very long, -so, I could ask him anything that I desired to know. Although I had witnessed three of my younger brothers departure, the meaning of death was not clear to me, One day BabaJi suggested we go to the farm. I accompanied him & he showed me plot by plot our land, whil telling me the story of Baba Marhana, He was a great Yogi -so said my granddad Coming upon the spot where I have fallen sometime before, he said: “This is wh where I want to be cremated” and so it was. The very next day he called my uncle Taya Dula Singhm his wife and their two sonswho were older than myself & my mother, - father was not home at the time. It was the hour of twilight an Grandfather said let us have our “rehras”. In the midst of it he reached the verse:-

“O Lord! consider that I am thine. Do with me whatever you seem proper. But take the fear of birth and death away from me.”
(I must have been about 14 years old)

and he kept on repeating it over and over. I suggested the next versembut grandfather paid no heed, just kept on repeating those two verses. After a minute or so his head fell forward and he was gone… This greatly impressed me.

One day I was going to the farm to bring fodder for the cattle. on my way there was a bridge spanning the water ditch which I had to cross. The ditch wasdry. Suddenly an impulse seized me that I should like to go under the bridge & as the water came from East to West I entered the ditch from the East and began to crawl through towards the West, The opening was barely big enough to crawl. About three-fourths of the way there suddenly was a lump which impeded my progress. Had there been water recently, I would have been muddy, and perhaps could have slipped or slide through. But it was bone-dry. I could not traverse the narrow opening. There I was, alone, and stuck. I could not move foreward nor could I get a toe-hold to move backward. I was scared besides. my thought process was “that is some framer would suddnely want to irrigate and fill the ditch with water, I would be drowned under the bridge and no one would know what had happened to me.” This spurred me to a supreme effort & with great difficulty I pushed with all my might with the palms of my hands as hard as I could bracing against the wall of my confines I managed to crawl backward.

We had a young bullock I had raised him from birth. When he was old enough he was yoked to and older bullock and went ploughing. From early morn to sunset I kept him working. It being his first day, his shoulder muscles must have been tired and sore. But understanding animal psychology & the care for living creatures is not taught to the children of our race. Outwardly & superficially there is enough sympathy & compassion for all animals, yet their needs are not attended to their full requirements at the time of need. This is not a part of Hindu civilization. So, the poor fellow was very tired and sat down because he could not carry on any more. There was still a little piece un-ploughed and I wanted to finish it, so I started beating him. He got up, went a little way and flopped down again. He was young, had always been well cared for and for the first time, was put to work, rather over-worked. I was eager to finish so I kept on with the blows until he bled… When we reached home, I did not feed him… (DrJi is seeping as he is dictating this episode) and later on I sold him---- He comes to me ofthe in my quiet moments saying: “I was only a beast, it is true, tired and sore. I though you were my friend & my master. You had better brain-mechanism and had been my companion from birth yet, you did not undersand me.” I apologized and beg forgiveness and wonder--- what purpose are we serving when we do such things unwittingly? Every time I se see him, sadness possesses me. How LONELY the being is while unfolding the pattern of his being!

(Here, we stopped for awhile…. DrJi was overcome at the remembrance.)

When I was about 12 yrs of age I visited some friends at Karmuwala, a village some 3 or 4 miles from our house. Karmuwala lies on the banks of the river Beas. The two boys I was visiting told me there was a whirlpool near by which was swallowing a lot of land, trees, ets. “Let us go and watch it”,- We were walking abreast on the river bank I being nearest to the water’s edge, We saw two islets as we approached the whirlpool. On one were two crocodiles and one on the other. We were just within two blocks of the whirlpool when the boy nearest to me nudged me playfully and into the river I fell. I became panicky… on one side the crocodiles on the other the whirlpool wanting to suck me in… Fortunately I was a good swimmer and managed to avoid the whirlpool & reach the shore but the stream had carried me 3/4 of a mile from where I fell. The boys were screaming & running in their concern for my safety. It is a wonder they did not rouse the crocodiles to action,. but they merely ignored me. That was my food fortune.

After wrestling a few years with sucess among ourselves, three of us would-be-pahelwans, went fourth seeking professional engagements. We walked all day about 44 miles, and reached Kartarpur, Distt.Jullundur, where certain wrestling matches were taking place the very next day. A chhing-mela was going on I was perhaps 19 years old at the time and was matched against an experienced wrestler from Dhundha about 30 years. At the very first contact I realized that he was much too powerful for me and after 15 minutes I was convinced I could not beat him so I decided to let him win. But he would not let me turn on my back. He kept on bending my head into the soft dirt & locking my left arm behind my back. … This was my first and last professional match. Of course, the long walk the day before did not help. For this I received the handsome sum of 14 annas…

I have no idea if these are the kind of incidents you asked for… and if you can make anything out of them? But here they are.

We will keep in mind the material promised and send more later. Meanwhile, wit with best wishes, Ever and always,