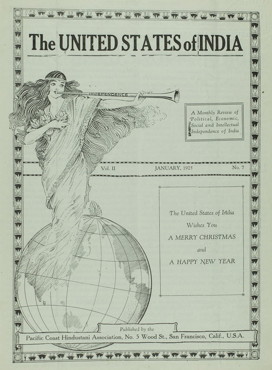 The United States of India (January 1925)

DESCRIPTION
The January 1925 issue of The United States of India (Vol. 2, No. 7) wishes its readers a "Merry Christmas and a Happy New Year" on its cover. The issue opens with a joint statement issued by Gandhi and the Swaraj Party, resolving to unite the different factions advocating "Swaraj" as a result of the repression under the new Bengal. The issue also includes several articles: a report on "Ireland and India" by Jack Carney, an article titled "The Unconquerable Spirit" from the English priest and friend of Gandhi, C.F. Andrews about the new Bengal ordinance and the Hindu-Muslim unity that has resulted from it; an essay on the "Outposts of the Empire," which reprints a speech by Rev. Dr. O'Farell at the Roman Catholic Cathedral of Sydney against Australian troops fighting on behalf of the British empire. The issue ends with the sharply anti-imperialist poem by Henry Labouchere titled "Where is the Flag of England?"