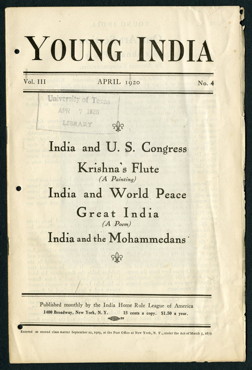 DESCRIPTION
The April 1920 issue of Young India (Vol. 3, No. 4) featured several articles comparing the struggle for Indian freedom with America's past. Various short reports draw a connection between the U.S. and India, comparing Patrick Henry to Ram Mohun Roy, Lincoln's thoughts on slavery to the "slavery" of British colonialism, and Walt Whitman's ideas of freedom to the Indian nationalist struggle. The issue's longer essays include "The Mason Resolution," describing N.S Hardiker's addresses at meetings in Washington D.C.; during one meeting, held by the Friends of Irish Freedom, he was introduced by Illinois Congressman William E. Mason, a sympathizer of the Indian nationalist movement and opponent of American rule in the Philippines. In "India and World Peace" by Lajpat Rai, and "World's Judgment" by J.T. Sunderland, both writers assert the argument for Indian independence. In "Another Successful Dinner," the anonymous writer describes a February 28 banquet organized by the Friends of Freedom for India. There other items make up the issue's contents: "The Future of India" by Alvin Johnson, "Mohammedans of India" by N.S. Hardiker, and a poem titled "Great India" by Amy Dudley. The Art section by Ananda Coomaraswamy featured an essay on the Krishna cycle, as represented in Rajput paintings. An image of the 17th century painting "Krishna with the Flute, and Two Milkmaids," from Museum of Fine Arts, Boston is printed inside the issue. The opening editorial reports of Lajpat Rai's return to Bombay on February 20th that year.