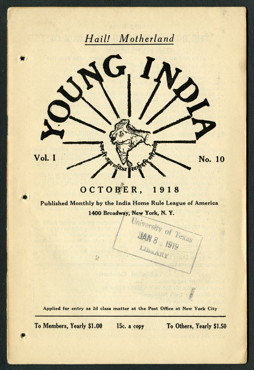 DESCRIPTION
The October 1918 issue of Young India (Vol. 1, No. 10) opens with an editorial on "Hindusthanees in U.S.A. and the New Draft Act," which encourages its Indian readership to enlist in the U.S. army despite possible grounds for exemption as British subjects. Included is a roster of new enlistees: Mohammad Akram ("Somewhere in U.S.A."), Sher Bahadur ("Over there"), B.M Bishwas (Camp Meigs), J.N. Guha (Camp Upton), Vale Mohammad ("Over there"), Bhagat Singh (Camp Lewis), Kehar Singh (near Port MacArthur), L.P. Varman ("Over there"), Najib Ullah ("Over there"), and Bajj Nath (with the Canadian Army at Fort Edward). The Bhagat Singh mentioned is most likely Bhagat Singh Thind, who also trained at Camp Lewis.

Several articles are in the issue: "Indian Opinion on the Reform Scheme" by Lajpat Rai, which reports on the special session of the Indian National Congress and All-India Moslem League held at Bombay, on September 1, 1918; "Specimens of Hindu Literature" by Benoy Kumar Sarkar, which covers "Medieval" literature starting from Kalidas; and "India's High Death Rate. Why?" by N.S. Hardiker. Other reports in the issue are "Dr. Subramaniya Iyer's Statement," which summarizes a letter to President Woodrow Wilson from the retired Chief Justice of Madras High Court, and "India in the American Press," which surveys the coverage of the Indian anti-colonial struggle from the Christian Science Monitor and The New Republic.