With support from The Andrew W. Mellon Foundation, we are honored to partner with six fellows in the 2nd cohort of SAADA's Archival Creators Fellowship Program in order to reflect the histories and perspectives of some of the most marginalized groups within the South Asian American community. 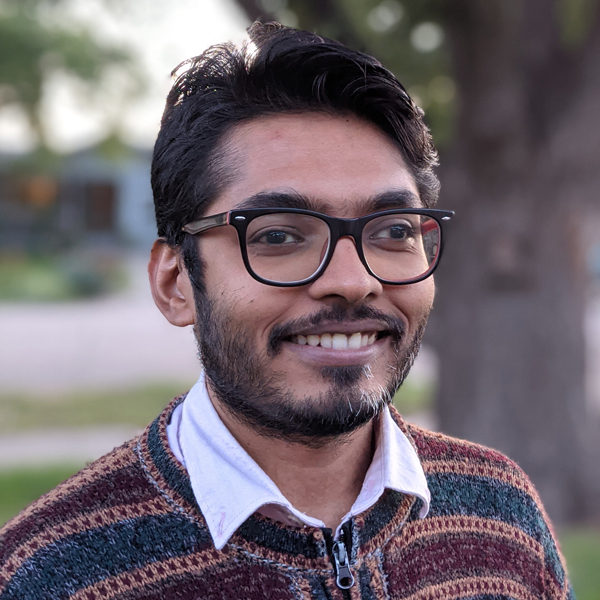 Efadul Huq is a poet, urban planner, multimedia storyteller dedicated to preserving queer community stories, and is currently completing his doctoral research on socially-just urban resilience in cities of the global south. Efad is the co-founder of Queer Archive of the Bengal Delta, which archives memories of queer social and political lives in the region and produces situated analysis through articles, reports, and videos. Efad’s project aims to collect stories and material artifacts that together speak to the experiences of Bangladeshi queer migrants in the U.S. The project hopes to capture the patterns of loss, displacement, nostalgia, questioning identities and making homes out of refuge and temporariness within this community. There is rare, if any, representation of queer Bangladeshi migrants in the existing South Asian American narratives. Through archiving and sharing these stories, the project hopes to promote more inclusive migrant narratives in the mainstream discourse.

Read Efadul's writings about their fellowship project in TIDES:
• Moving Memories
• Have Passport, But No Country

Savannah Kumar (she/they) is a community artist, civil rights advocate, and law graduate working at the American Civil Liberties Union of Texas. For nearly a decade, Savannah has been working to reimagine justice with those who have directly experienced incarceration and state violence. Savannah's legal scholarship on solitary confinement and forced labor was recently published in the Harvard BlackLetter Law Journal. Savannah's project for SAADA involves bearing witness to South Asian Americans whose lives have been impacted by incarceration in jails, prisons, juvenile detention centers, and immigration detention centers. Savannah will collect these intergenerational narratives and offer them back to the community to facilitate healing, welcoming, and solidarity.

Read Savannah's writings about their fellowship project in TIDES:
• Constructing an Archive and Deconstructing Carcerality
• A Hunger for Fresh Food, a Taste of Chutney, and Freedom

Nikhil D. Patil, MPH (he / him) is a global health researcher working at the intersection of infectious diseases, data, technology, and design. A former Peace Corps Volunteer Volunteer (Togo ‘08-’10), he has spent his career advocating for women, children, and other marginalized populations on a wide range of health topics including immunizations, Ebola response, clean water, medical device design, and health service delivery. As an avid reader of public health history and an aspiring queer writer, he was inspired to concentrate his work as a 2020 SAADA Archival Creators Fellow on the impact of HIV and AIDS within the South Asian American community. Nikhil lives in Atlanta with his husband Ryan and their two cats, Maize & Nash.

Omme-Salma Rahemtullah (she/her) is dedicated to community-informed media programming, having worked in independent film exhibition and community radio, bringing to the screens and airwaves stories from communities often sidelined in mainstream media spaces. She currently works as a freelance impact film producer, and teaches film programming at the University of South Carolina. Born in Tanzania and raised in Toronto, Omme is a recent transplant to the American south (Columbia, SC). Her project will focus on the migration of Ugandan Asian refugees to the South Carolina upstate in 1972, where they were the first refugee resettlement program in the state, and opened the first Ismaili Jamatkhana in the U.S. in the town of Spartanburg. With this project, she wants to highlight and ensure that the narratives of refugees, Muslims and Asians from Africa are part of the stories we tell of South Asians in America.

Read Omme's writings about their fellowship project in TIDES:
• I Used To Feel American
• Tongue Tied

Nargis Hakim Rahman (she/her) is a Bangladeshi American Muslim journalist from Metro Detroit. Nargis graduated from Wayne State University with a bachelor’s degree in journalism, and a psychology minor. She is passionate about community journalism and hopes to give American Muslims and minorities a voice in the press. Her work has appeared in NPR, Huffington Post, Haute Hijab, Eater, The Muslim Observer, Brown Girl Magazine and more. Nargis's project focuses on documenting Detroit's Bangladeshi women entrepreneurs who have found creative ways to own businesses while upholding and celebrating culture and traditions. While there are national stories about Bangladeshi men contributing to Detroit's socioeconomic development in the region, women have been largely left out of the narrative, working behind the scenes for too long.

Dadasaheb Tandale (he/him) is an advocate for social justice and is currently a Ph.D. student at the School of Global Inclusion and Social Development at the University of Massachusetts, Boston. He is passionate about working for socio-economic and political inclusion of marginalized communities; particularly at the intersections of health rights, land rights, education, and climate justice for Dalit and Tribal populations in India. He has worked extensively in research, advocacy, communications, project management, and operations with government, partner agencies and communities. Dadasaheb aims to build an oral history project of the Ambedkarite movement in the U.S. Through this project, he intends to explore the sense of adopted identity as an Ambedkarite, various forms of discrimination faced and the forms of resistance adopted by the members of the community within the oppressive caste dynamics in the U.S. Being an Ambedkarite himself, he intends to bring an alternate cultural narrative of the community to the forefront, advancing the anti-caste approach.

Read Dadasaheb's writings about their fellowship project in TIDES:
• A History of Pride
• Educate, Agitate, Organize

Over the course of the nine-month fellowship period (October 2020 - June 2021), Efad, Savannah, Nikhil, Omme, Nargis, and Dadasaheb will collect stories from their communities for inclusion in SAADA. With support of a community-based advisory group, their objective is to conduct oral history interviews and identify, digitize, describe, and provide online access to new archival materials from their community. They will also write for Tides (our online magazine), develop an online exhibit for the SAADA website, and organize an event sharing these newly collected stories and materials with the public.

We look forward to sharing our work together with you in the months ahead!