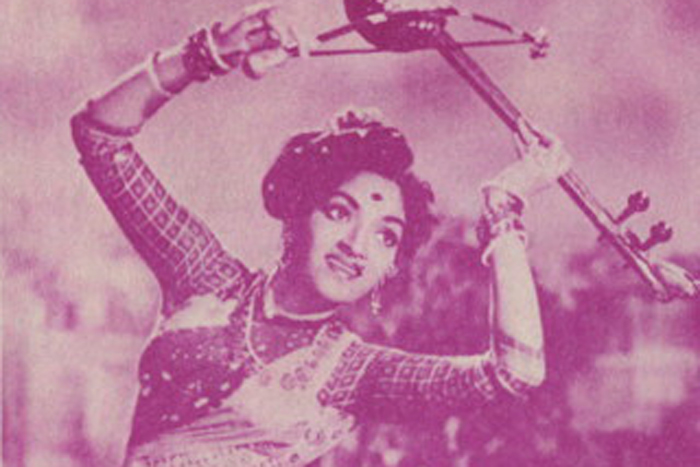 In the 1960s, Hindi cinema was still only a minor curiosity in the American film landscape. If you lived in California, though, you had a few chances to catch a Hindi film in theaters. This pair of pamphlets [1, 2] advertising screenings for Hindi films comes from SAADA's Bagai collection. In February 1966, the Rialto Theater in South Pasadena advertised a double-header of films starring the actor-dancer Sandhya and directed by V. Shantaram. The first film was the award-winning, social drama 2 Eyes, 12 Hands (Do Aankh, Barah Haath, 1957), followed by a film entitled Dancing Ranee, touted as India’s answer to The Red Shoes (1948). (This second film was most likely Jhanak Jhanak Payal Baaje, a 1955 feature starring Sandhya and Gopi Krishna, and directed by Shantaram.) Months later, the double-header was screened again at the Richelieu Theater in downtown San Francisco, where they were advertised under the banner “Sandya, the Music Maker.”

These films were brought to California as a result of the labor of L.A.-resident Ram Bagai. He was the son of Vaishno Das and Kala Bagai, migrants from Peshawar, who had arrived with their three sons at Angel Island in 1915. Ram Bagai’s daughter Rani explains that her father had trained as a cinematographer at USC, but never attained the sort of success he had hoped for in the film industry. Instead, he took great effort in bringing and promoting Indian films for U.S. audiences. Shantaram’s Do Aankh, Barah Haath, Rani Bagai explains, was a particular favorite of her father’s. “My father loved that film,” Bagai explains, “and he invested his own money in adding subtitles, which my mother helped him with.” Ram Bagai specifically arranged for the films to be shown in art theaters in hopes that it would attract a sympathetic crowd.

While the Sandhya features were an early instance of Bollywood's presence in the U.S., it was by no means the first time Hindi films had made it over to the Western hemisphere.1 A cursory search through the Access Newspaper Archive turns up a few advertisements in Jamaica’s Kingston Gleaner for Shantaram’s film Journey of Dr. Kotnis in 1957 and the Kapoor family vehicle Junglee in 1963. A Sandusky newspaper reports that Shantaram’s film Shakuntala (1943) was screened in a Greenwich Village theater, with the director described as an Indian Frank Capra or Orson Welles.2 Shantaram and Sandhya themselves visited the U.S. in 1946, where they allegedly tried to recruited “eight actors and four actresses” from Hollywood to Bombay.3 Whether they were successful, we don’t know. What we do know is that while Hindi films famously traveled to places like Greece, and other spaces in Europe and Asia by the 1960s,4 Hindi cinema hadn't yet made inroads in the American film landscape. 1. One of the more successful Hindi features to see world-wide distribution was Mehboob Khan’s Aan, which was renamed The Savage Princess for English-speaking audiences; Khan had visited the U.S. in 1952 to speak with American distributors for a U.S. release of his film. See Thomas, Bob. “Indian Film Director Describes Censorship.” Austin Daily Herald, 3 Oct, 1952: 12.
2. O’Brian, Jack. “Broadway.” The Sandusky Register Star-News 23 Jan 1948: 4.
3. Parsons, Louella. “Hollywood.” Middletown Times Herald 28 Oct 1946: 10.
4. For two excellent introductions on the global reach of the Hindi film industry, see Sangita Gopal and Sujata Moori’s Global Bollywood (2008), and Anandam P. Kavoori and Aswin Punathambekar’s Global Bollywood (2008).