Paving the Way for Cyber Queens

Ifti Nasim was a gay muslim poet from Pakistan, who immigrated to the U.S. in 1969. Nasim spent much of his adult life in Chicago and was inducted into the Chicago LGBT Hall of Fame in 1996. He helped found Sangat, one of the earliest South Asian LGBT organizations in the U.S. Nasim is also remembered through his poetry collections, including Narman and Myrmecophile.

Kareem Khubchandani collected an oral history from Ifti Nasim in 2009, two years before he passed away. In the interview, Ifti Nasim describes growing up gay in Pakistan where he dreamt of becoming a dancer before being shot while performing poetry in college. He shares colorful stories of cruising at bathrooms at a YMCA in Manhattan after immigrating to America and performing as a dancer at gay bars in a predominantly white queer scene. Ifti Nasim describes the feelings and motives surrounding the foundation of Sangat, his work as an activist during the AIDS crisis in the 1980s, and his connection to poetry in Urdu, Punjabi and English.

A full version of the audio is available in the archive. We’ve selected some of our favorite moments from the conversation and edited for clarity here:

KK: What were your aspirations when you were five or ten years old and how did that change through your education?

IN: I wanted to be a dancer. Let’s put it this way, in a Muslim society a boy wanted to be a dancer, right away you are marked with the scarlet letter, that he is sissy and disgrace to the family. But I still learnt kathak, and privately among friends I used to dance and all that. Then at the same time, I started writing poetry. I was very good at writing the poetry, because I was studying a lot. So I studied all classics of Urdu poets, and Punjabi poets...So I get my share of a lot of respect. 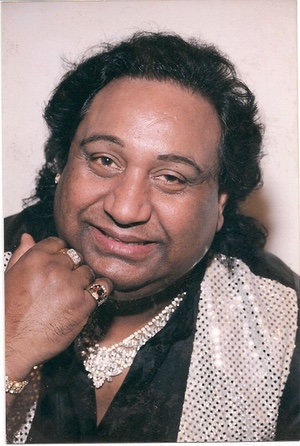 But like I said I had a very low image of myself. So I’ve always thought because I’m gay they will find out later on so I won’t have any friends. I’ll die as a lonely death. You know. Because, I thought I will live only 35-40 years old, and after that either I’ll die or I’ll commit suicide or something like that. But then, it so happened I started writing poetry, and that was a big release, that was a big catharsis for my soul and everything.

KK: So the day you arrived in America, did you go straight to a gay bar? Or how did you find your way into a gay community?

IN: I landed in New York. So, I went to 42nd street, there was a YMCA. I was tall, dark, handsome and exotic, so right away people were making passes at me. Even in the toilets, when I went there… I wrote a poem about it. I have some sailor, [he] made a pass at me, and we went and had a good time.

KK: So how do you just get up and leave Pakistan. You didn’t have the internet to see where the YMCA was. Who did you know?

IN: Honey, remember this thing: life went on before you cyber age queens came in existence. We paved your way to walk on to the cyber age. At that time, somebody told me America is the best country, you should go there. But I never wanted to leave my country, I just wanted to do the CSP [Civil Service of Pakistan] and stay there and become a bureaucrat and all that kind of stuff. But then, the fear of being exposed, the fear of living a double life was so enormous, I don’t want to stay.

KK: How did you get involved with a community and a movement, and was it predominantly white? Did you find other desis, or other people of color?

IN: When I came to this country, I didn’t want to come to this country or any other country. I wanted to stay in Pakistan. But when I found out that I’m a gay person, and I have no choice. So they were trying to marry me off with a girl, which I didn’t want to. So I told my father that I’m going to America, just to visit. So I came here. I did not visit. I stayed. And of course, at that time there was no cyber thing, no computer, so you have to go to a gay bar. I used to frequent the gay bars in Chicago…There was no desi at that time. Nobody even knows where India or Pakistan is, you know. So this was, all, almost lily white.

KK: You’ve said that god does not make trash, but you’ve also said that you’re not a practicing muslim, what is your relationship with god?

IN: I love her. I have a very good relation with her, you know. And she always takes care of me. You know, going to mosque, synagogue, or mandir, or whatever places you go to worship is not necessary. That is a trade, they are there to make money off your fears and off you. You can have a relationship with god at home, or outside, sitting in a garden. I’m more like a sufi, mulamti sufi. You know I’m like that. Like Rumi, Saadi, Hafiz. Like that, I’m like that. So, I might not practice what a traditional muslim does, or a hindu does, but the thing is I have a very good relationship with god.

KK: In your poetry, you write in English, in Urdu and in Punjabi. Do you think different languages provide you different forums to say different things?

IN: All three languages are a different expression. In English, I can use the lingo, or the expression which I cannot use in Urdu. You know, especially the words like penis, and pussy, asshole, and those kind of things or fucking, sucking. I could not use it in Urdu. Urdu supposedly is a very limited language, where you cannot use those words, because it’s considered to be vulgar, although it is also considered to be vulgar in English. But with the beatnik poetry, which I’m very much in love with beatnik poetry, like Allen Ginsburg is my guru. Ruhani ustad you can call it, my spiritual guide and spiritual teacher, Allen Ginsburg. I love beatnik poetry. That’s where he started using these words and break the mold.


KK: You’ve talked about, in some of your interviews, narmani - the truth poets. Who are they and how do you know about them given the distance and all of that?

IN: Narman was the first book ever came out in Urdu with the gay and lesbian poetry, and the lingo which I used in that. When it was getting composed in Pakistan, the publisher who was going to print it found out about it — he said take away this unholy book before I burn it. So my distributor had to pick up everything from there right away, and it was actually distributed underground most of the time. But the young people, when they read this poetry, that was revelation for them that somebody can write like that too. So they become enamored with this poetry, and they start writing about true feeling, whether it was toward the same sex or toward the woman. Before that, our object of love was androgynous, you know, you cannot call him male or female, now they started calling whatever, if she’s a woman they will call her woman, if it is a man, they will call a man. They call narmani poetry, mean true poetry, to them. Narman means hermaphrodite in modern Persian.

KK: Can you tell me about how you met Mother Veeru, and how you decided to start Sangat?

IN: Ok, I met Mother Veeru through a friend of mine Raju. He told me that he is a gay guy, and he’s trying to establish something here, so I called her, and we met. We decided we’re going to start an organization or a platform which is gay and lesbian for South Asian, Indian, Pakistani origin, mostly. But we took the name of Trikone. We started off as Trikone because Trikone was the only one at that time. I was a member of Trikone, so we said why don’t we start a branch here. But fortunately or unfortunately, Trikone was not very responsive of our organization, because they themselves were in the beginning. They did not know much about it, how to do it...Finally we have to decide we should give it a new name, so because I’m in the music, and the dances, and the poetry, I said why don’t we call it Sangat. Name Sangat — Sangat mean[s] togetherness. When somebody is playing sitar, and tabla is playing — it’s called Sangat, all the music fusion are called Sangat. If it’s together — it’s sangeet, sangeet sathi, friend. So I said why don’t we call it Sangat. First of all, it’s a very common name: Hindi, Urdu, Punjabi, Sanksrkit — same name. It’s also used in music very much, and it’s a beautiful name. So I gave this name to Sangat, and we said yes, we should do that, so that’s how we started. Like when we started, we were like about two or three people at that time. Then it ballooned — people coming and going, coming and going. Like every organization, after like 15 years, we got burned out, and there was no young people coming up. Now you guys come, and come Trikone, which I’m very happy about that.

KK: When you’re getting ready to go out into the world, and you look into your gorgeous closet of furs, how do you make your decision?

IN:...Dustin, he wrote that synopsis, that Ifti whenever he gets in a room, ‘he effortlessly becomes the main focus of the room.’ And I learn that trick too, because I have to sell my bod when I was young! Now it’s payback time! Any other question? We will keep on doing it, it’s interesting, but let me just rest a little bit.

JICYI: NBC News explores the origins of Sangat, and the life of Ifti Nasim. Includes an interview with Kareem Khubchandani:

Outside of this fellowship, Mustafa works as an ecologist and spend much of their time thinking about soil, fungi and trees. Mustafa's family is from Hyderabad, and they were born in Saudi Arabia before growing up in Texas.