One Archive Destroyed, Another Reclaimed


Reimagining Ilankai Tamil Liberation
By Kartik Amarnath |
Author’s Note: When drafting this piece, it was suggested I write a paragraph providing context for readers unaware of Sri Lanka’s history. The recommendation was well-intentioned, but I have chosen not to follow it. Our histories and why they matter cannot be summarized in a paragraph, especially one written by me. I am especially reluctant to attempt this for patrons of a South Asian archive. South Asian American spaces tend to hold asymmetric power dynamics that by design, lack a basic understanding of who Sri Lankan Tamils are and what we’ve been through. Behind the shroud of the South Asian label, Indocentric dominance has long benefited from our tokenized presence while contributing to our erasure and literal eradication. Therefore, this written work will speak directly and unapologetically to my community. And yet my hope is also that "the wretched of the earth,” regardless from where, may be able to see ourselves in the message behind the words. To this end, if you could benefit from more context, and come with the understanding that our liberation and struggles are bound, please do get in touch (kkamarnath91@gmail.com). As one of the interviewees for this oral history project stated, “Me educating you contributes to our collective liberation and it does not feel exhausting. Especially if you receive it and turn around and do some transformative sh*t.”

Dedicated to all Sri Lanka’s Tamils, even the ones that the powerful called terrorists or traitors.

“You were told for the thirty years, forty years of the war, ‘Wait till the war is over, we will talk about sexuality issues then.’ Then comes 30 years later and they say, ‘Wait - now there’s terrible peace. So let’s now talk about the terrible peace that is happening’…The one realization I have is we can’t break one chain and then break the next. We are either going to break them together, or all of you are trapped. All of us are trapped. All the shackles will remain...”
—Priya Thangarajah (1982–2015)

In the summer of 2004, at an eatery in the belly of Zurich, a traveler visiting from the United States caught the interest of the waitstaff. Amidst the clamoring of steel plates, visitor and staff traded the names of towns and villages in an ancient tongue. They were all refugees from the Jaffna peninsula, the northernmost region of Ilankai (“Sri Lanka”) where shores taper to form the island’s iconic dewdrop shape. The restaurant patron felt at home in Switzerland while blanketed in the warmth of his Jaffna Tamil; a dialect of melodies and rhythms that has cradled the art of rhetoric for millennia.
What started as camaraderie quickly changed in tone. The patron looked over his shoulder to see a framed photograph of Vellupillai Prabhakaran, the leader of the Liberation Tigers of Tamil Eelam (LTTE), looming behind him. He realized that this conversation might not simply be an exercise in nostalgia, but rather a first step in the well-known playbook of extortion to support “the boys” back home. The patron became quiet, afraid to divulge anything else about where he came from or where he was going. When asked about the boy he was with, his mind raced with images of child soldiers. He did everything he could to leave quickly and respectfully. His full self was expected to “wait till the war is over” lest his nuance threaten their nationalism. The LTTE believed the only way to grieve anti-Tamil violence was by supporting the movement to create new borders, bankrolled by racketeering the very people those borders were intended to safeguard, now ironically dispersed throughout the world.

That man was my father. That boy was me.
Growing up, my father rarely discussed Sri Lanka. Maybe it was so that he could bury the past to “keep moving” as an immigrant in the United States, trading memory for mobility in a country built on collective amnesia. Maybe it was so that he could survive the daily choreography of conservative Indiana, where going to work meant coming home with a straight face after getting passed up for yet another promotion given to a white coworker. Maybe it was too painful to bring up. Maybe it was a combination of all these things and more, or none at all.

Few and far between as they were, the moments when my father gave voice to memories provided some hints as to why “the troubles” were hardly spoken about in our home. He would complain about men in our diaspora who “talk law about Ceylon'' with little regard for the aspirations of Tamils who didn’t leave. One night, he didn’t return home and my mother found him lying on a beach spilling island-shaped tears. When we visited our homeland in Ilankai’s war-torn northeast, I saw him shed the pretense of American exceptionalism for a fleeting moment, and question whether leaving Sri Lanka had been worth it. Repressed under the armor of a Tamil American patriarch lies the emotional core of a refugee without a language to grieve the traumas of exile.
That language would exist today had Ilankai Tamil resistance embraced our community’s cosmopolitan histories, identities, and politics. Instead, Tamil political discourse, diversity, and debate were whittled away during Sri Lanka’s Civil War by targeted assassinations, intimidation, ostracization and misogyny. Eventually there was nowhere for our grief to breathe other than within the LTTE’s crucible of ritualized nationalist fervor. Tamil liberation movements that transcended nationalist confines to prioritize caste, class, gender, region, religion, sexuality, and solidarity within and beyond our community were violently silenced. Whether in Ilankai or in the diaspora, Tamils killed Tamils in the name of Tamil liberation.
As a sensitive Tamil American kid with unremarkable STEM scores, my own alienation within and beyond our community inspired nocturnal Wikipedia searches for answers to questions I didn’t have yet. I felt a primal rage learning about Kuttimani and Thangadurai, imprisoned Tamil militants who had their eyes gouged out by Sinhalese inmates while prison guards watched with approval. I felt, and still feel, a sense of awe viewing photos of our sisters in LTTE battle fatigues fighting at the frontlines.

It was also painful to accept that the LTTE’s vision of Tamil self-determination – or lack thereof – once meant forcibly evicting Jaffna’s Muslims and indiscriminately massacring Muslims in Kattankudy and Eravur. It meant the only visible representation of my struggle against oppression – of my self – was a smokescreen for aimless violence. I feel cognitive dissonance hearing Tamils in the diaspora still deny or justify the ethnic cleansing of Muslims done in our name, even as our own community is persecuted, and the LTTE were annihilated, due in large part to the Islamophobic “War on Terror.”
As a young adult, I felt recentered learning about the Eelam People’s Revolutionary Liberation Front, where Tamil, Muslim, and Sinhalese militants fought side-by-side for an independent Eelam, and untethered again when I learned they sold out to the Indian occupation. I felt dazed and confused by the assembly line of upper-caste North Indians publicly attacking singer MIA’s political shortcomings, with no acknowledgment of the countless Tamil women raped by their own kin.

At 30, I still can’t safely express or explore these conflicting emotions. Our histories are often told either to sanctify a fragile narrative of nationalism, or to vilify everything about it. This narrows where we draw political inspiration from and gets us nowhere. After decades of appealing to the world’s parliamentary bodies, political parties, celebrities, global media, human rights bigwigs, development agencies, philanthropists, universities, multilateral organizations, think tanks, and resistance movements, all we are left with is each other and this terrible peace. In 2020 white feminism’s icon Justice Ruth Bader Ginsburg, in one of her last Supreme Court decisions before her death, sided with the Court’s conservative majority to deny asylum to an Ilankai Tamil refugee in Department of Homeland Security v. Thuraissigiam. This decision effectively dismantled the right to due process for all asylum seekers in the United States. The invalidation of our pain is now a central feature of American immigration law.
2021 marked the 40th anniversary of one of the world’s most notable modern-day biblioclasms: the Sri Lankan state’s burning of the Jaffna Public Library and along with it, our archive of Tamil history. As I write this, an emerging collective of Tamil feminists of diverse genders and sexualities known as Maynmai (“Dignity”) have organized a memorial event centering the “right to remember.” While our communities are barred from collective mourning, Maynmai is holding space for all Tamil-speaking lives lost to violence and war: victims of the anti-Tamil pogroms in 1958, 1977, and 1983, Malayaga Tamils, LTTE and non-LTTE militants, Jaffna and Eastern Muslims, Sinhalese comrades, oppressed castes, the disappeared, victims of extrajudicial executions, refugees, indigenous peoples, and all others not allowed to grieve. Perhaps we can reclaim the archive, not to yet again chronicle a mythic past of Tamil kings and their romanticized empires, but to instead capture these moments of creativity, emergence, and hybridity that chart a different path for our diaspora. 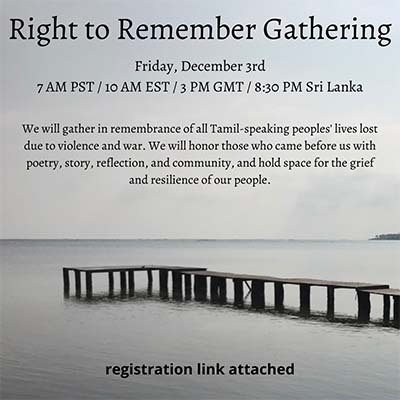 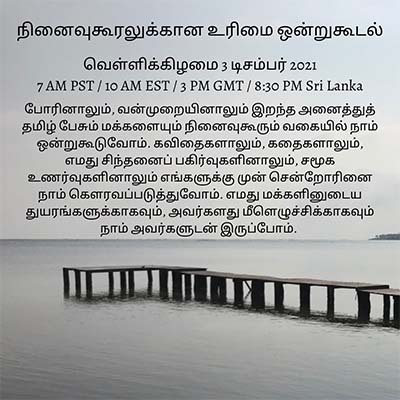 Maynmai is but one contemporary expression of the Ilankai Tamil legacy of feminist dissidence. By documenting this legacy’s visions for a plural, just, and dissident Tamil liberation – violently silenced for far too long – we build towards an inclusive future. Collectively, we reimagine what could have been and maybe even what still can be. By fearlessly reckoning with the painful flaws of past attempts at fighting for – and loving – ourselves, we finally begin to heal, together. This SAADA Archival Creators Fellowship project is a modest contribution to that effort. 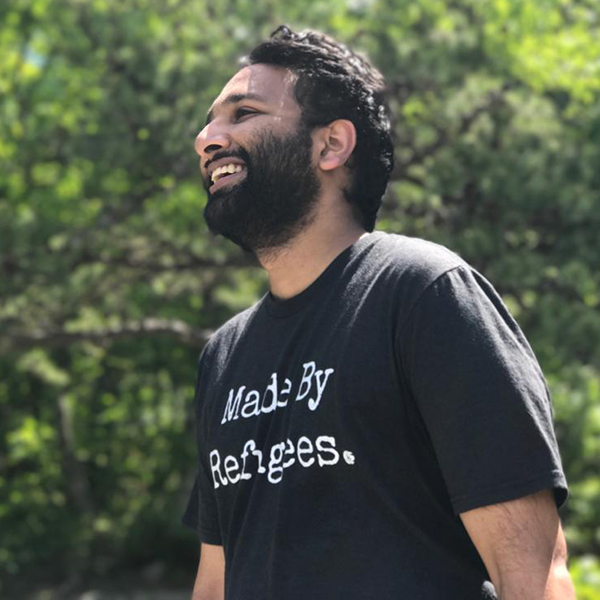 Kartik Amarnath is an aspiring clinician based in Brooklyn, NY with professional and academic backgrounds in environmental justice and critical urban studies. His fellowship project will document the multigenerational legacy of Ilankai Tamil feminism in the United States, providing an alternative to dominant narratives that simultaneously stereotype the Tamil diaspora as model minorities and as ethno-nationalists on the 'wrong side' of the War on Terror. The Archival Creators Fellowship Program is made possible with grants from The Andrew W. Mellon Foundation and the Institute of Museum and Library Services (IMLS).