Living in a Gilded Cage 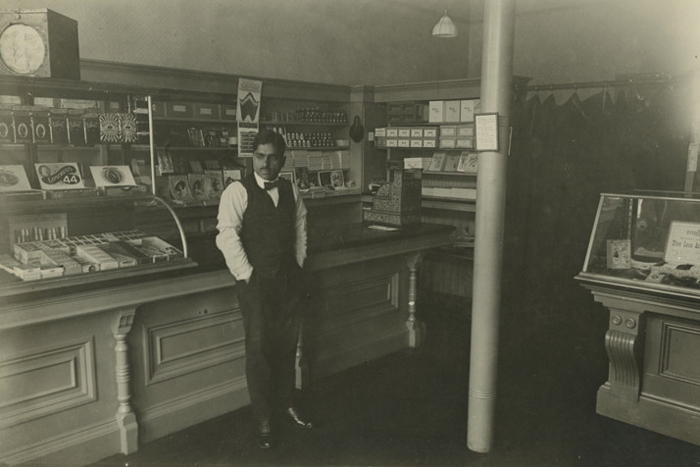 In 1915, Vaishno Das Bagai, Kala Das Bagai and their three children landed on Angel Island off the coast of San Francisco, CA, after a long sojourn from India. Described as having a "brilliant mind and acute intelligence," as well as a "burning revolutionary spirit to see his country free from the bondage of British rule," Bagai was fleeing with his family from British suppression with the intent of fighting for India’s independence in the United States.1 Upon arrival, Bagai bought a home, started an import/export business, opened a general store, and became an active member of the revolutionary Gadar Party. In 1921, Bagai naturalized as a U.S. citizen in the Federal Court at San Francisco. But, as Erika Lee and Judy Yung write, "thirteen years after his arrival in the United States, Bagai had become bitterly disappointed in his adopted homeland."2 Indian immigrants, particularly those associated with Indian nationalism, were routinely harassed and surveilled by both British and U.S. authorities, and racist laws such as the Alien Land Laws specifically prevented Asian immigrants from owning land in much of the U.S. West Coast. To make matters worse, after the 1923 Supreme Court case of Bhagat Singh Thind, Bagai was denaturalized on the basis of not being white.

The effects of losing U.S. citizenship were traumatic for Bagai – "he was forced to liquidate his property, including his San Francisco-based general store."3 Furthermore, he was denied a U.S. passport to visit India and was instead recommended to apply for a British passport and resume his British citizenship. Increasingly disillusioned, Bagai rented an apartment in San Jose and committed suicide by poisoning himself with gas in 1928. In a suicide note left behind to his family and published in the San Francisco Examiner, Bagai wrote:

I came to America thinking, dreaming and hoping to make this land my home. Sold my properties and brought more than twenty-five thousand dollars (gold) to this country, established myself and tried to give my children the best American education…But now they come to me and say, I am no longer an American citizen. They will not permit me to buy my home and, lo, they even shall not issue me a passport to go back to India. Now what am I? What have I made of myself and my children? We cannot exercise our rights. Humility and insults, who is responsible for all this? Myself and the American government. I do not choose to live the life of an interned person: yes, I am in a free country and can move about where and when I wish inside the country. Is life worth living in a gilded cage? Obstacles this way, blockades that way, and the bridges burnt behind.4 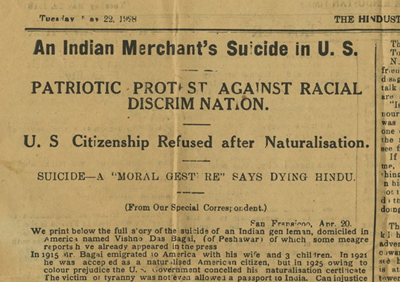 Bagai’s suicide was one of the many tragic consequences of the overt racial discrimination and harassment that early migrants from India faced in the United States. Several holdings by SAADA provide an intimate glimpse at the life and work of Bagai and the family he left behind. These include extensive oral history interviews of Rani Bagai, Vaishno’s granddaughter, who discusses her grandparents, their marriage, children and life in San Francisco, as well as photographs and other artefacts documenting Bagai’s life and suicide. SAADA’s collection on Bagai can be accessed here. 1. “Biography of Vaishno Das Bagai,” 1, South Asian American Digital Archive, http://www.saada.org/item/20130513-2741
2. Erika Lee and Judy Young, Angel Island: Immigrant Gateway to America, (New York, 2010), 145.
3. Ibid., 146.
4. "Here’s Letter to the World From Suicide," San Francisco Examiner, March 17, 1928.
Kritika Agarwal is a doctoral candidate in American Studies at the University at Buffalo (SUNY). She is currently working on her dissertation titled, “Uncertain Citizenship: Asian Americans and Denationalization in Twentieth Century United States.” She can be reached at kritikaa@buffalo.edu.