Legacies of the 1965 Immigration Act 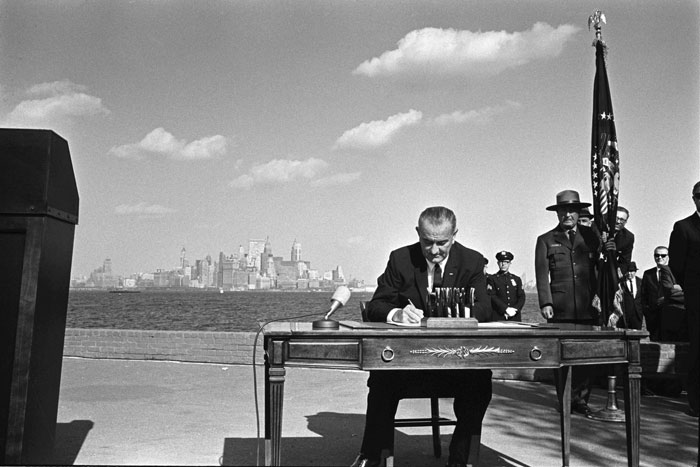 Fifty years ago on October 3, 1965, President Lyndon B. Johnson signed the Immigration and Nationality Act into law. He and a number of the nation’s leading lawmakers traveled to Liberty Island and the base of the Statue of Liberty to make it official.

The 1965 Immigration Act remains the foundation of U.S. immigration law and represents the last time that the U.S. passed comprehensive immigration reform. It has transformed every aspect of American society.

But Asian Americans, especially Indian Americans1, have been particularly affected by this landmark act.

South Asians [like Mirrha Catarina de San Juan, previously profiled in Tides] traveled to the colonial New Spain (Mexico) as early as the 1500s and began to arrive in the United States as early as 1820. Although their numbers were small, as historian Vivek Bald has shown, there were South Asian communities scattered across the United States by the early 20th century. Mass migration to Canada in the early 1900s led to a southward movement to the United States. South Asians, mostly Punjabi Sikh male laborers, worked in the lumber mills, railroads, and farms up and down the Pacific Coasts of Canada and the United States. They joined other immigrants from China, Japan, and Korea, and like these groups, were targeted by anti-Asian xenophobes who were convinced that Asian immigrants were a threat to the U.S.

The San Francisco-based Japanese-Korean Exclusion Leagued changed its name to the Asiatic Exclusion League (AEL) in order to expand Asian exclusion to South Asians. Derisively and incorrectly calling South Asians “Hindoos,” the AEL argued that they were dangerous cheap laborers and unassimilable 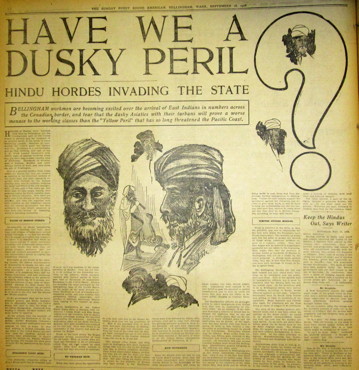 foreigners whose support for Indian nationalism was a threat to national security. Discrimination and racial violence followed. South Asians were harassed, prohibited from owning or leasing land like other Asian immigrants, and driven out of towns and cities like Marysville, CA and Bellingham, WA. By the early 20th century, South Asian exclusion had become a national issue. The 1911 U.S. Immigration Commission identified South Asians as the “least desirable race of immigrants thus far admitted to the United States."

Congress debated South Asian immigration, and support for exclusion grew. The Immigration Act of 1917 created the Asiatic Barred Zone which officially excluded an estimated 500 million people in Asia. At the same time, South Asians were prevented from owning or leasing lands in many western states that had passed Alien Land Laws. And in 1923, the U.S. Supreme Court ruled in the Bhagat Singh Thind case that South Asians were ineligible for naturalized U.S. citizenship.

These laws almost marked the end of South Asian communities in the United States. But they persevered.

World War Two and the U.S.’s alliance with India brought new changes and beginnings. South Asians in the U.S. lobbied politicians to revise the immigration laws and to build support for Indian independence. The Luce-Celler Act of 1946 allowed South Asians to apply for admission and become naturalized U.S. citizens. All immigration, however, was subject to the discriminatory national origins quotas that were still in place, and India’s quota allowed only 100 people in per year. South Asians were still effectively restricted from coming to the U.S., and in 1960, there were only 12,000 Indian immigrants in the country, representing just 0.5 percent of the foreign-born population at the time.

This is where the 1965 Immigration Act comes in.

Inspired by the Civil Rights revolution in American society, the 1965 Immigration Act explicitly abolished the discriminatory national origins quotas that had regulated entrance into the country since the 1920s. It explicitly prohibited discrimination on the basis of race, sex, nationality, place of birth, or place of residence in the U.S. government’s decisions to issue immigrant visas. Instead, the law established a new system preference system based on professional status and family reunification.

Historians still debate whether Congress intended to simply remove discrimination in immigration law or usher in a new historic era of mass migration. It is clear that many lawmakers still held on to nativist and even racist views on immigration. If they discussed Asian immigration at all, it was mostly in the context of U.S. foreign relations and the desire for America’s immigration laws to support (or at least not sabotage) the U.S.’s foreign policy goals in Asia.

Although Congress may have not intended to open America’s gates so widely to Asian immigration, Asians, especially from India, Pakistan, and Bangladesh, have come in increasing numbers. Large scale transformations in the U.S. and India helped to make this happen, creating a pathway into the U.S. While new U.S. immigration laws opened the doors more widely to skilled and educated immigrants, countries like India were expanding its educational systems and producing large numbers of well-educated and skilled workers who could compete in the global marketplace. Because India’s economy could not fully absorb all of these workers, many Indians looked abroad, including to the U.S., for opportunities.

As they have come to the United States, new immigration laws have facilitated even more migration. The Immigration Act of 1990, for example, increased the number of permanent work-based visas and made changes to the temporary skilled worker categories. In 2014, Indians received 70 percent of the 316,000 H-1B visas granted by the U.S. government. Students from India are the second-largest group of international students in the United States after China.

And along with Indians, immigration from Pakistan, Bangladesh, and Sri Lanka has also increased dramatically since the 1990s. The Pakistani American community, for example, grew by nearly 90 percent during that decade and there are now over 409,000 Pakistanis in the country.

They are settling in places that have long-welcomed South Asian immigrants like California, New York, and New Jersey. But they are also increasingly making homes in Texas, Minnesota, Georgia, and North Carolina. Two current governors (South Carolina’s Nikki Haley and Louisiana’s Bobby Jindal) and one presidential candidate (Jindal) are Indian American. A number of Indian-born tech leaders now head up some of the country’s most successful tech giants, including Google (Sundar Pichai), Microsoft (Satya Nadealla), and Adobe (Shantanu Narayen).

At the same time, countless Indian and other South Asian immigrants struggle at the economic, social, and political margins of American society. Many labor in exploitative work conditions, are not proficient in English, and are victims of violent hate crimes, like the a shooting at a Sikh temple in Oak Creek, Wisconsin, that claimed the lives of six worshippers in 2012. And according to a recent report by the Migration Policy Institute, the unauthorized Indian immigrant population experiences the greatest growth rate amongst all unauthorized immigrants, increasing by 914 percent since 1990.

New South Asian Americans join a new “nation of immigrants” in America that is increasingly diverse and global. The foreign-born population in the U.S. now numbers nearly 41 million, or around 13 percent of the total U.S. population. South Asian Americans have long roots in this country, but the past fifty years have been especially important to this long and rich history. As we mark the fiftieth anniversary of the 1965 Immigration Act, let’s reflect on how far Asian Americans have come, but also, how far there is yet to go.
1. This article focuses primarily on immigration from India to the United States after the 1965 Immigration Act. The term "South Asia" and "South Asian" in this article is used to refer to the region before 1947, since the current-day nation-states of India, Pakistan, and Bangladesh did not exist at the time.
Erika Lee is the Rudolph J. Vecoli Chair in Immigration History and the Director of the Immigration History Research Center at the University of Minnesota. Her new book, The Making of Asian America: A History has just been published by Simon & Schuster.