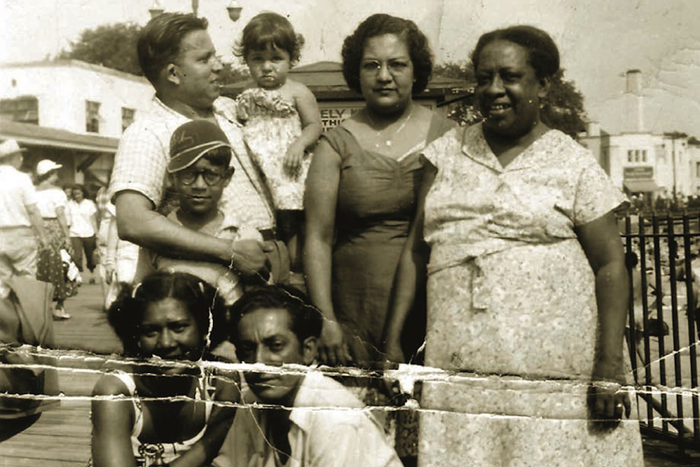 This is a preview snapshot story from SAADA's forthcoming book, Our Stories: An Introduction to South Asian America.

In January 1918, in the dead of a severe New York winter, the SS Khiva docked on the Westside waterfront of Manhattan. The Khiva was a British steamship carrying goods from colonized India to the United States. The ship was manned by a crew of laborers from what is now Pakistan and Bangladesh. On the voyage, some of the men would have spent long days pushing wheelbarrows full of coal from the hold of the ship to the engine room; others would have hammered this coal into small pieces and piled them near the furnaces; still others would have shoveled the coal into the furnaces to feed the flames that made the steam that ran the turbines that propelled the ship forward. Maritime work was some of the most arduous labor of the early industrial age, and in the case of British trade and transport ships, it was labor performed by men from the colonies. South Asians comprised the largest group among colonial laborers on British steamships. They signed on to the ships in Calcutta and Bombay on contracts that were little better than indenture agreements and then toiled at the mercy of their British “masters” for months and years at a time.

That night in January, two young workers took leave from the Khiva to explore the docks of New York City. One, a Kashmiri named Amir Haider Khan, was just eighteen years old and already a four-year veteran of the maritime trade. He and his friend eventually wandered into a waterfront provisions store, whose Jewish proprietor put the idea into their heads of deserting their ship. He described the higher wages they could get on U.S. vessels, and coached them on what to do. So one evening a few days later, Khan and his friend took shore leave again, “telling our shipmates we were going for a stroll,” but they did not return. When they found themselves wandering the streets of Manhattan in the middle of a cold winter night, “wrapping ourselves in whatever we had—an old pair of pants, a cotton shirt and a coat, a cheap cap and a coloured piece of cloth for our heads,” it was an African American boardinghouse keeper in the predominantly Black Tenderloin district along Seventh Avenue who ultimately took them in and helped them hide. “[M]y companion had a talk with the Negro landlady,” Khan writes, “and explained to her that we had deserted a ship and did not want to return [and] it was necessary for us to remain indoors while the vessel was still in port, so that we would not be apprehended. [So s]he arranged for a young Negro girl who was living in a room on the same floor to [go] purchase our food [for us]—bread, butter, eggs, etc. which she cooked for us in the house.”

Amir Haider Khan was part of a population of early 20th century immigrants and sojourners from South Asia whose stories have remained largely hidden and untold. Beginning around the time of the First World War, hundreds of South Asian maritime workers, men who labored in the engine rooms and kitchens of British steamships, escaped into the crowded waterfronts of New York, Philadelphia, and Baltimore in search of less brutal work and better wages onshore. These men were predominantly Muslims from rural backgrounds. The largest number were from villages in East Bengal—a region that would later become the nation of Bangladesh. Others hailed from regions that are part of present-day Pakistan—Punjab, Kashmir, and the Northwest Frontier. During the war, these men found that their labor was in demand in U.S. steel, shipbuilding, and munitions industries, and they formed clandestine networks to help one another “jump ship” and make their way into the heart of New York City or travel inland to factory towns far from port. These secret networks helped sustain a presence of South Asian workers in the United States even after the passage of the 1917 Immigration Act, so that by the 1920s, these men could be found throughout the New York area and across the industrial Midwest.

Only a handful of these men’s stories remain – for the most part, passed down through their families. Amir Haider Khan spent an eventful seven years in the United States before returning to India to join the independence movement; he made several voyages as a member of the American Merchant Marine, then worked in a steam engine yard in upstate New York and a Packard auto plant in Detroit. He got involved in Indian anti-colonial activities in New York City; he helped smuggle pamphlets authored by the revolutionary Ghadar Party to Indian workers in port cities in Central America and East Asia; he joined an early African American civil rights campaign in Detroit; and he even learned to fly an early model airplane in rural Indiana.

John Ali was another ship worker, from a village in Sylhet, East Bengal, who jumped ship in Baltimore in 1920. There, he learned English, in part, by listening to the radio. He married a local African American woman, Mamie Chase, and had three children, but kept moving from one factory job to another throughout the U.S.: from Columbus to Chester, Pennsylvania, and finally to Detroit. Ibrahim Choudry was a student activist in East Bengal before working his way to New York on a steamship around 1923. He quickly became a leader among the community of escaped Muslim seamen in the New York area. He sheltered other ship-jumpers, helped them with immigration issues, acted in the role of an imam during religious observances, and wrote letters back home for men who were not literate. In 1947, when East Bengal became part of a newly independent Pakistan, Choudry helped found the Pakistan League of America, a social and political organization headquartered on the Lower East Side of Manhattan, and in the 1950s, he built ties with African American Muslim groups in Harlem.

Habib Ullah, from Noahkali, and Eshad Ali, from Sylhet, were two of the first men to establish Indian restaurants in New York City. Habib, who had spent years as a dishwasher and cook after jumping ship in the 1920s, opened the Bengal Garden Restaurant in Manhattan’s theater district in 1946, and ran it with his Puerto Rican wife Victoria. Eshad Ali opened the Bombay India restaurant in the center of Harlem, on 125th Street, in the 1950s, and ran it with the help of his African American wife, Ruth. These examples, along with Khan’s story of holing up in a Black boarding house in 1918, point to the crucial role that African American and Puerto Rican women played in providing South Asian ship jumpers with the possibility of creating new lives in the United States. Indeed it was African American and Caribbean communities in cities such as New York, Baltimore, and Detroit that took in South Asian Muslim migrants at a time when the U.S. nation itself sought only to exclude them.
Read more of Vivek Bald's research on his website.
Vivek Bald is a scholar, writer, and documentary filmmaker whose work focuses on histories of migration and diaspora, particularly from the South Asian subcontinent. He is the author of Bengali Harlem and the Lost Histories of South Asian America (Harvard University Press, 2013), and co-editor, with Miabi Chatterji, Sujani Reddy, and Manu Vimalassery of The Sun Never Sets: South Asian Migrants in an Age of U.S. Power (NYU Press, 2013).