From Partition to the Present


An Interview with Artists Nadhi Thekkek and Rupy Tut
By Anantha Sudhakar |
Catch an encore performance of Broken Seeds (Still Grow) at the American Conservatory Theater at the Costume Shop in San Francisco on March 15, 17, and 18. Learn more. 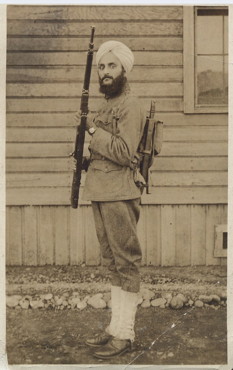 The dynamic performance captured the violent and complex history of Partition—the splitting of India into the independent nations of India and Pakistan at the close of the British Empire—and connected the questions around displacement and discrimination that characterized that event with the South Asian immigrant experience in America. As part of their research for this performance, Tut and Thekkek turned to SAADA’s online repository. In particular, photographs and stories about Bhagat Singh Thind, along with archived news articles about the Bellingham Riots of 1907, served as direct inspiration for sections of the show that addressed the history of anti-South Asian xenophobia in the U.S.

Following the Friday, November 17th performance, Tides Co-editor and SAADA Academic Council member, Anantha Sudhakar, moderated an artist panel with Tut, Thekkek and the dancers who participated in the show (Shruti Abhishek, Tanu Sreedharan, Vertika Srivastava, Sri Thina Subramaniam and Lalli Venkat). The transcript below is excerpted from the first half of the panel, which focused on Tut’s and Thekkek’s artistic motivation and messaging. You can also listen to the full panel, which includes an audience Q&A featuring the musicians (G.S. Rajan, Sindhu Natarajan, Preethi Ramaprasad, Santosh Chandru and Chris Evans):


AS: First, Nadhi, Rupy, thank you to both of you, the dancers and the musicians for this beautiful performance. One of the most striking things in the performance was the way that it brings together dance, spoken word and visual art, which I know reflects each of your artistic backgrounds. So can you start by telling us how this collaboration came about?

RT: Well, Nadhi and I were friends before we were collaborators. Somebody asked me yesterday, “Would you collaborate again on a bharatanatyam piece?” and I said, “I don’t really pick the medium, I pick the person.” Nadhi’s a great collaborator, in general, so that’s the reason we both started working together. I love the fact that she is as invested in her traditional art form as I am in miniature painting.

NT: I echo what Rupy said. I had found out about the Partition Archive through a friend, and I went to a “Voices of Partition” event, where witnesses to Partition spoke about their experiences, and that really moved me. I noticed that there were a lot of parallels with what the witnesses were saying during the panel [and] what’s going on in our world now. So that was what struck me about this project, in general: that there was something about the past that I wanted to connect to the present. Since her grandparents were survivors of Partition, Rupy was just one of the first people I talked to about it. And when we realized we were both working on our own artistic reflections of Partition, it kind of became a question of: “Should we be working together?” So that’s kind of how it all came together for me.

AS: I know that you conducted some significant historical research when preparing this performance. Could you talk about some of the sources you used and how those sources shaped the particular themes and stories you wanted to bring to the stage?

NT: So, I already mentioned that one of the first sources for me were the witness accounts in the Partition Archive. Guneeta Singh Bhalla is the director of that program and meeting her and listening to the excerpts and accounts they have online, and the transcripts she gave us access to, really shaped the beginnings of my research. From there, we went into reading books. Like, a lot of books!

RT: I think I started my research on Partition since I was a kid, because my grandparents always told me stories of their life before. They painted a very different world for me—and a world I couldn’t access—so it was something very fascinating for me. At the same time, I connected to that loss even more when I moved to the US at the age of 11 and I was like, “Oh, this is what it feels like losing friends, or the home you grew up in.”

But our research was actually very extensive and, after we had a good idea what the accounts were saying and what we felt about them, we really wanted to connect it to ourselves. And a lot of references we got from some of the co-presenting organizations, like SAADA, the Pioneering Punjabi Archive, and some really key amazing people in the community who have been doing research for so long. And we just kind of asked them: “Hey we’re interested in finding out about South Asian American history, especially in the Bay Area, but also in California, also in America.” And it was a lot of reading, a lot of going back and forth and sharing information with each other that we didn’t know and we were so amazed to find out (and we were curious why we didn’t reflect on it sooner). But we’re lucky that there are organizations that have been doing this amazing work of archiving for us.

AS: One aspect of the performance that was really intriguing is that you made these links between Partition and the kind of racist divisions that shape our country today. I was struck by the ending, where you perform the call to action—a march, a protest, a coming together. Could you speak to what you think art contributes to activism? Or, vice versa: what is important about bringing activism into art?

NT: For me, when you’re witnessing art, everyone’s a little more open. I feel that it’s a great place to be more open with each other and it sort of allows us to be a little more vulnerable and accepting. So I feel like using art like bharatanatyam or the paintings and having people get together and really hearing each other’s stories, without interferences from the outside world—it’s just you, and it’s personal and it’s the art form and the stories—I think it really gives people a chance to open their hearts to something new that maybe they didn’t really think about before. That’s my personal goal with my art, so that’s what we hope to do and I think that is a form of activism: to try to get people together to not fight as much.

Lalli Venkat: I think for me, learning bharatanatyam growing up, it was something where you’re always channeling someone else’s emotions. But I think this is probably one of the first pieces where it was channeling something that I think we’ve all felt being Indian American or growing up in the United States as a minority. So to be able to dig deeper and use that emotion in this piece was something that was unique. I think it also had all of us thinking about how to use our artistic mediums to kind of funnel our emotions into the future as we have a lot of political things going on right now, and trying to understand how to use this art to channel that emotion.

Tanu Sreedharan: I’ve been dancing Indian classical dance since I was seven, and I’ve never had the opportunity to be very creative within the art form. It’s a centuries-old art form, and we’ve always told stories that we’ve heard from our parents, but not stories of our own experiences. And, for me, this process of bringing emotion out that already exists…and we felt day to day—that connection that I had to somewhat force in bharathanatyam as a classical [medium]—I didn’t have to force for this. It was so natural. We’re all from different dance schools so, even within the art form, there’s a unity in that last piece. Dancing it onstage with everyone is almost emotional. It feels amazing.
Anantha Sudhakar is an Assistant Professor of Asian American Studies at San Francisco State University and a member of SAADA's Academic Council.