Alok Vaid-Menon is an “anti-colonial/anti-racist queer spoken word artist” who is “making race central to queer politics” through artivism. 21-year-old Alok is a Feminist Studies and Comparative Studies in Race and Ethnicity Major at Stanford University. Alok recently spoke with Qurratulain 'Annie' Sajid to share personal narratives and provide enlightening insights on how the oral tradition of spoken word poetry can be used as a site of radical resistance and decolonization.

QAS: How would you define your art?

AVM: I wouldn’t actually define my art. I would say that we are all artists, but I am being more intentional about it. I believe that everything from constructing myself to having a conversation to performing a spoken word poem can all be 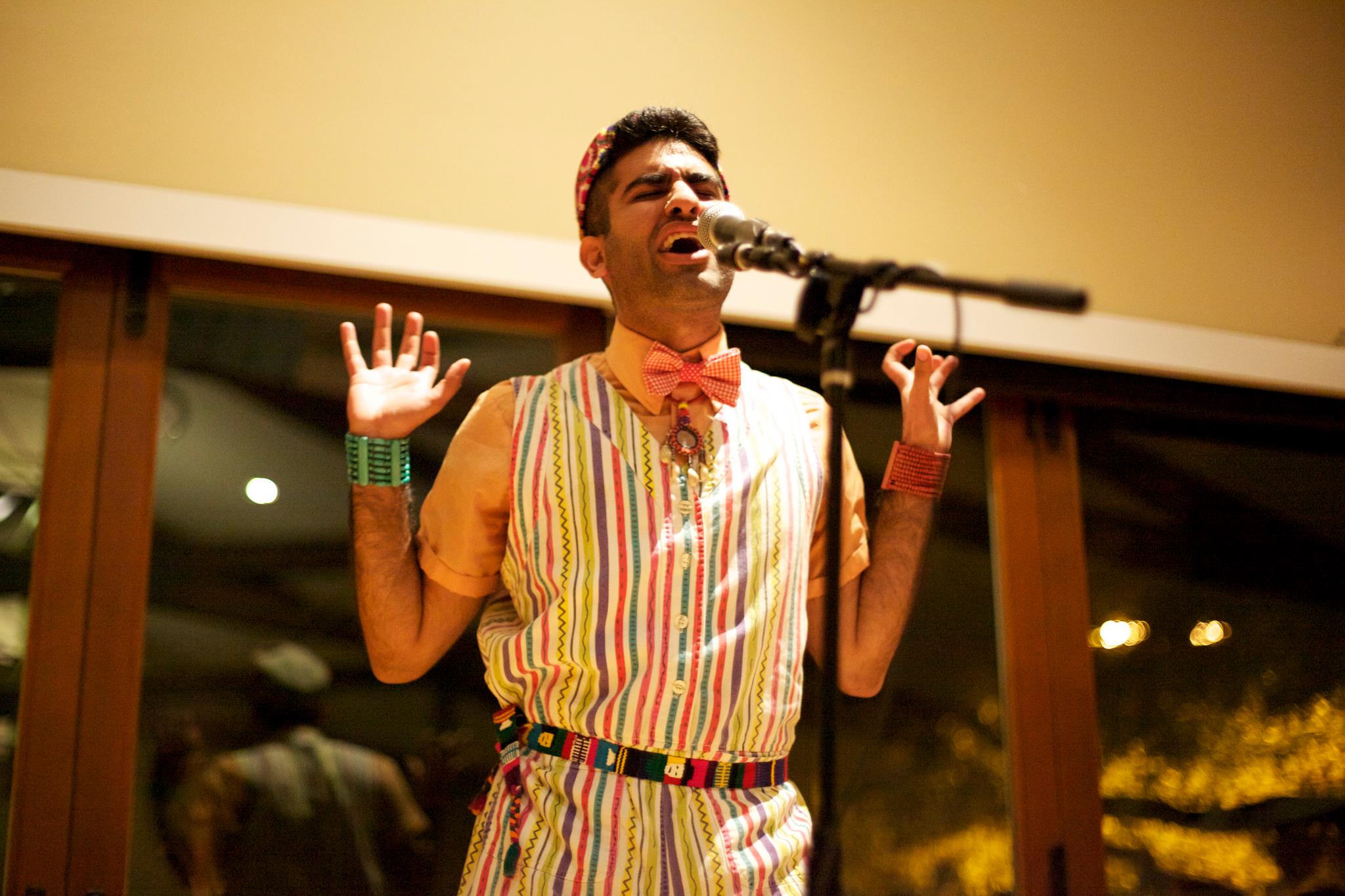 considered a form of art.

At some point I began to recognize that my ‘art’ was the natural consequence of what it meant for me to navigate through the world. When I don’t write for a while I begin to feel frustrated and closed off. I come to art for therapy and resistance. It is so easy to tear apart the world: to identify all of the corrupt power that oppresses us. Art for me is a way of finally creating something new, of asking, what if?

QAS: When did you first begin writing and performing spoken word?

AVM: I grew up in a pretty small town in Texas and I never knew what spoken word was. I started writing ‘poetry’ in seventh grade to submit to those youth literary journals -- you know the ones full of poems about sunflowers and cheerleaders. I wrote about dark things from the beginning: poetry was a way for me to express the things that I didn’t have words for. I continued to write in darkness: I was one of those angsty teenagers who felt like no one understood me in the world so I turned to poetry for company. I continued to write like this throughout high school.

I saw spoken word performed for the first time at college. The pieces were about genocide of indigenous peoples in the Americas and forced assimilation of the Asian American diaspora. I was astounded at how visceral the experience was: how evocative and thrilling these performances were, how I had to confront things about myself I had never even thought about. On a whim I wrote my first performative piece and was accepted to the Spoken Word Collective at Stanford University. We write together every week and it kind of works like group therapy. We support one another as artists and friends. Since then I have been writing predominantly for performance -- still about dark things, but with more nuance (at least I’d like to think).

In 2011, I really started prioritizing my art. I began channeling my energy into archiving feelings through poetry. What I mean is I began to think of poetry as a way of crystallizing a moment, a thought, and experience. Every time I read one of my poems I want to remember what I felt like when I wrote it. If I don’t have a poem -- a ghost of that emotion -- to read I forget what it felt like. This act of archiving feeling is, I think, I tremendously important political project. The way that our increasingly neoliberal state has encouraged us to think about activism -- in the domain of legal access and state recognition -- is insufficient. No law can capture the experience, the trauma, and the violence of existing as a queer, racialized, or other abject body. Poetry becomes a way for us to show the world our scars. A political project that is only concerned with notions of hope and progress neglects the profound power of pain, abjection, degradation, and violence. Poetry allows us to demonstrate that entire spectrum of feeling -- a continuum that is especially political for those of us imagining a world beyond power.

QAS: What drew you to this work? Follow-up: Why did you continue with it?

I’ve continued with spoken word because there is nothing more powerful than having someone come up to you after a show and say, “I understand you. You speak to me.” The language of poetry allows us to create bridges from one another and recognize that we’re not facing these things alone. Art creates political and emotional solidarities between people -- an infrastructure that is necessary for any movement for social and cultural change.

QAS: What type of reactions/responses have you received from your work?

AVM: Most of the people who come to my shows and read my stuff are people who are already committed to social justice. I recognize that I have very little ‘mainstream’ appeal. While I don’t want to pigeonhole my work, my interest is foremost in reclaiming our color from the rainbow that stole it from us: by that I mean, incorporating racial justice into our movement for queer liberation and vice versa.

What I have found is that many (queer) people of color are excited about this message. They are tired of the internalized racism and trauma they have accrued participating in the white-dominated gay movement. They are tired of a movement that continually cloaks its racism by calling our families and peoples ‘backwards’ and ‘homophobic’ (read: not appropriately modern).

However, I have also found that many white people are terrified by this message: they are angry that I am revealing the ways in which their power is not some abstract concept they learn about in history class, but it is rather something that makes them beautiful in the club, something that allows them to have easier access to sex and desirability. White people, and people of color interested in assimilation, tell me that I am ‘too aggressive’ and that I ‘hate white people.’ I do not -- I hate the logic of white supremacy, I hate what it has done and continues to do to our world, I hate the way it divides our community and turns us against one another.

QAS: What do you hope others gain from your work?

I want people to recognize that racial justice is not some ‘easy,’ ‘cool,’ or ‘hipster’ process for white people and/or people of color -- rather it will be difficult, contradictory, and divisive because there are no frameworks for us to use yet.

Owning up to a legacy of genocide, slavery, and empire involves a type of humility and openness that art can help us create.

AVM: So much. I come from a legacy of South Asian artists, activists and academics. My grandfather, Krishna Baldev Vaid, is an accomplished novelist and playwright. My grandmother, Champa Vaid, is a celebrated poet and painter. My mother helped start one of the first South Asian feminist journals in the US. My aunt was one of the first people of color to lead a national gay rights organization. My childhood home was saturated with art and politics and therefore, I owe all of my creative energy to my family and my lineage.

At first I viewed my queerness and -- by extension -- my art form as a rebellion against my South Asian culture -- one that I associated with conservatism, conformity, and assimilation. But now the more I learn about South Asian activism and anti-colonial resistance, the more how important it is to situate my work within a South Asian canon of expression and politics. I think I’m part of a generation of young South Asians who are continually learning that the imagination of ‘South Asia’ that we learned from our parents and grandparents was a selective and homogenous view. In Fall 2012 I spent a couple of months working with the queer movement in Bangalore. I learned that India is far more queer, more liberal, more activist, less Hindu-nationalist than the ways I had been taught about it. I began to recognize that not all Indians are interested in assimilation and defining success by becoming doctors and other ways to amass capital. I also feel like I’m part of a generation of South Asian diasporic youth who grew up rejecting our religion, ethnicity, culture in order to ‘fit in.’ We are the ones who came to university and recognized just how important it all was: regretted why we did not pay more attention to the stories we heard in the temple, the recipes we could have learned. We are the ones who are yearning so desperately to remember what being Indian means outside of a an Orientalist imaginary that reduces it to colors and food.

My art has become a way that I negotiate these questions and more.

QAS: How would you define the relationship between arts and activism?

AVM: What should become increasingly evident to us is that the way that we have come to think about ‘activism’ and ‘progress’ has failed the majority of us. What is the use in defining something as a human right when our hearts still fear difference? What is the use in passing hate crimes legislation, when the police still rape, incarcerate, and abuse us? Legal and administrative frameworks are often masks that conceal the violence that it takes just to maintain the status quo.

We need a new language, a new arsenal of tactics, a new way of creating politics outside of the State, outside of the NGO, outside of ‘formal’ institutions. Art is a place where we can imagine alternative forms of politics and activism -- politics that recognize that we are bodies that feel and experience hatred and Art is fundamentally about endurance: about reminding people just what is at stake and reminding people of the new worlds we can make together.violence, bodies that will not be changed unless we respond with love and empathy.

I do not believe that revolutions can be started with art. I think, once again, in our increasingly neoliberal life even ‘art’ becomes co-opted by the system. However, I believe that revolutions need art to keep them sustained. Art is fundamentally about endurance: about reminding people just what is at stake and reminding people of the new worlds we can make together.

Click here to learn more about Alok’s work.
Qurratulain "Annie" Sajid is a recent college graduate who majored in English and Women's Studies at the University of Michigan-Ann Arbor. As an aspiring community organizer, she is a firm advocate for liberation, laughter, and pomegranates-in that order.