How To Drape Your Sari 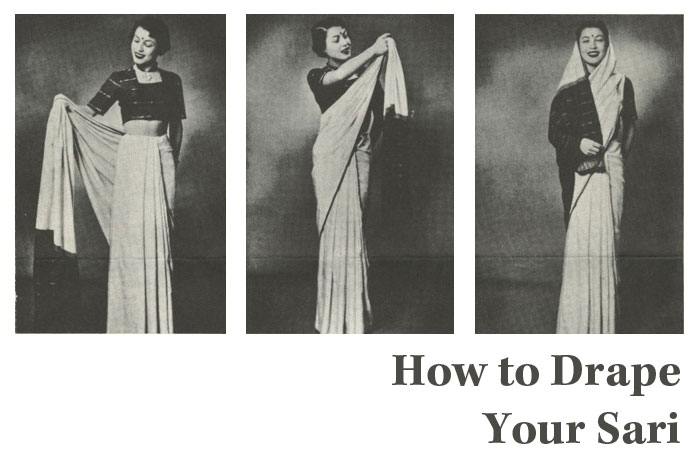 A sari appears to be a simple item of clothing. Folded up and perhaps stacked on a shelf with others like it, it is an unobtrusive six to nine yard rectangle of cloth, 45 inches wide. But this belies the actual complexity that unfolds when the same piece of cloth is wrapped around a person. How to wear a sari? How many wraps or pleats does one include? How does one drape it? What blouse is worn underneath? Who should wear a sari? When should one wear a sari? Questions about sari-wearing are compounded in the sartorial environments of the U.S., especially as the sari and other items of South Asian dress are not predominant styles of dress. Emma Tarlo, an anthropologist of South Asia, points out that clothing is indicative of cultural, social, and personal concerns and reflects women’s socially, culturally, and religiously grounded strategies in what to wear.1 Post-1965, more liberalized immigration laws in the U.S. allowed greater number of South Asian female immigrants to enter North America, and saris became highly visible in American print 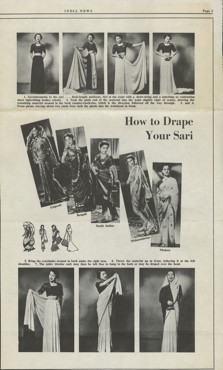 "How To Drape Your Sari" contains illustrations on how to wrap a sari, as well as pictures of different regional variations of sari draping in India. First-generation South Asian-heritage women tell a multitude of stories relating their methods of adapting saris to lives at home and work in the U.S.. These stories incorporate descriptions of the kinds of sartorial code switching, the methods of self-expression through attire, involved in dressing in traditional clothing in a context primarily versed in the skirt-trouser-suit modes of western dress. Wearing a sari indicates being in two imagined spaces at once, what Appadurai refers to as imagined worlds.2 A sari calls symbolically to the “authentic” or “traditional” dress spaces of the subcontinent; a sari also indicates modernity by signaling the wearer as part of the transnational South Asian community. How To Drape Your Sari speaks to the “traditional” imagined worlds by featuring tilted images of regional examples of sari draping; these tilted images seem to tumble into modernity toward the squarely positioned example of “modern” drape.

"How To Wear A Saree" features an illustrated guide to sari draping and, with a lower corner advertisement for a Vancouver, B.C. emporium, indicates the availability of 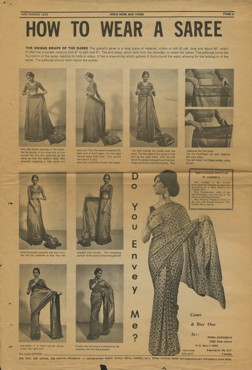 saris in North America. Viewed in light of the 1965 Immigration and Nationality Act and increased awareness of South Asian immigrants in the U.S., the guide suggests there is now less of a need to stock up on clothing when on trips to the Subcontinent. Saris were readily available in local North American shops, especially if one lived in a location with a substantial South Asian community: regions of California, Chicago, Atlanta, and the New York City borough of Queens. One need not incur the expense of air travel and return to South Asia to purchase saris or have family or friends ship clothing to the U.S. when one can economically support the transnational availability of traditional dress.

With the tag “Do You Envey [sic] Me” and reference to the popularity of Indira Gandhi in the U.S., "How To Wear A Saree" also suggests awareness of an intensifying interest in South Asian dress and sartorial politics. Newspaper fashion articles and advice columnists fielded questions from non-South Asian women on how to wear a sari, the appropriateness of wearing one, and how to procure sari-making materials. Royal Sari House on Fifth Avenue in NYC, responding to this interest, offered free brochures describing how to make and wear saris. During the 1950s, 60s, and 70s, newspapers in major U.S. and Canadian cities reported on saris and sari-wearing by the ranks of the rich and famous whose names frequently appeared in the society pages, including Barbara Hutton, Babe Paley, Elizabeth Taylor, Eva Gabor, and opera star Blanche Thebom. Jacqueline Onassis sparked a surge in interest in the Subcontinent 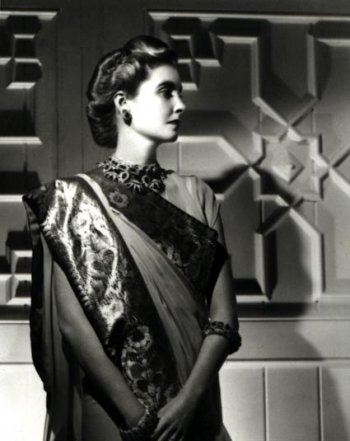 through media-coverage of her trip to India in 1962. Media coverage of the couture world also focused interest on the sari by featuring images and descriptions of gowns by European and American fashion designers: Dior, Balenciaga, and Mary McFadden incorporated South Asian design elements into couture gown construction.

The recent media spread within pop culture of celebrities dressed in Indo-chic attire3 and the appropriation of sari-wearing by non-South Asians complicates the question of “what to wear?” with questions of identity and authenticity. These days a plethora of online retailers ship globally, placing saris and other styles of South Asian dress in the hands of interested, style-conscious shoppers. Indian sari retailers cater to diasporic clientele with outlets in the U.S.. Fashion shows in larger cities such as San Francisco, Los Angeles, Chicago, Dallas, and Atlanta show sari styles to clients. For those of South Asian heritage, sari-wearing in the U.S. indicates a type of cultural competence that embraces the imagined worlds of traditional and modern in a variety of pleats and drapes.
1. Tarlo, Emma. Clothing Matters: Dress and Identity in India. Chicago: The University of Chicago Press, 1996.