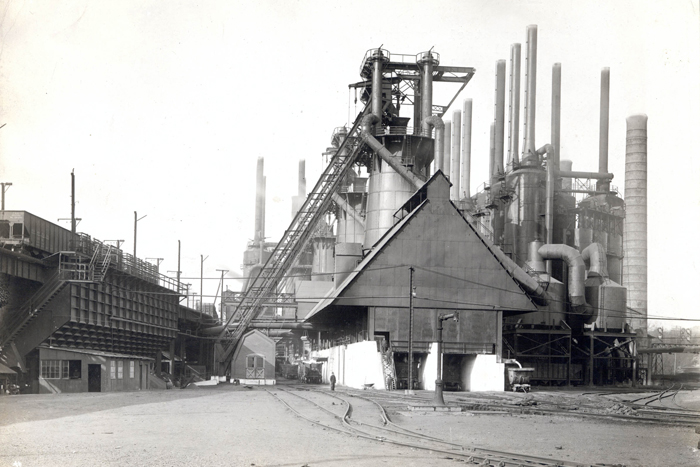 In August, 1920, immigration authorities arrested thirty-nine Indian workers at the gates of the Bethlehem Steel Company in Bethlehem, Pennsylvania. The subsequent set of events offers an intriguing look at Indian labor migrants caught on the crossroads between U.S. immigration officials and British interests in the U.S. East Coast. The Independent Hindustan, “the official organ of the Hindustan Gadar Party,”1 provided a detailed description of the arrests:

They were not even allowed to go to their bunk-houses to get their clothes; they were kept in police custody and were taken to Ellis Island the next morning. At this gate of America they were lodged in filthy cells full of vermin. Anything but decent food and human treatment was meted out to them. They were studiously kept away from any communication with newspaper reporters…Without any formal charges and without any hearing they were ordered to leave the American shores at once. The men were puzzled beyond comprehension at such an undemocratic act of the Democratic officials in Democratic America.2

What followed next, however, was even more puzzling – a British Captain showed up on the scene and ordered the men onto his ship Lucerus to work as seamen. When the men refused citing hellish working conditions, “Federal Immigration authorities threatened them with six months’ imprisonment in jail.” Faced with these scarce options, several men proceeded to conscript themselves on the British boat, while “nine defiantly refused” and one being a naturalized citizen “demanded the privileges of an American citizen.”3

The workers had been picked up by immigration authorities as part of “factory sweeps aimed at capturing and deporting undocumented Asian workers under the provisions of the 1917 Immigration Act.”4 Many of the Indian workers in these factories were seamen who had jumped ship to escape from harsh working conditions and in search of industrial jobs. A Washington Post article in 1920 noted that there were “now in the United States 2,000 Hindus and other natives of barred zones” who had “come ashore from ships on seamen’s certificates” and had “failed to return to their vessels.”5

For Indian activists, the heavy-handed tactics of immigration authorities was a sign of the United States “doing England’s dirty work.” As the Friends of Freedom for India and the Civil Liberties Union worked to secure writs of habeus corpus on behalf of the seamen, Walter Nelles, the ACLU’s legal counsel, “discovered a gigantic conspiracy between powerful British shipping interests and certain American immigration authorities to shanghai Indian workers out of this country to serve British interests…” Nelles charged that the conspiracy included high ranking officials such as the Commissioner General of Immigration, Anthony Caminetti, and Byron Uhl, Deputy Commissioner of Immigration at the Ellis Island, and others who allegedly had connections with certain British steamship companies. During the hearings, further interesting details came out:

It became known that when these men were arrested at Bethlehem, some of them asked why they were being arrested. The police told them, “We have nothing to do with these arrests, it is the British that want you.”6

Furthermore, an immigration inspector named Harold M. Rhoades admitted that between eighty and one hundred Indians had been "impressed into the British service by the action of the Immigration Department.”7

The serious allegations soon led to Louis F. Post, Assistant Secretary of Labor, ordering “thorough investigations” into the practices of its immigration officials. The Department of Justice also got drawn into the investigations and eventually discharged 20 officials from service. The Commissioner of Immigration at Ellis Island, Frederick A. Wallis, also committed to making changes at the Island and noted, “There will be improvements and changes at all costs. I am in full charge and from this time on, I shall take all responsibility for conditions on Ellis Island. If the doorstep is not clean, what can we expect of conditions inside the Nation itself?”8 1. The Independent Hindustan, South Asian American Digital Archive, http://www.saada.org/source/the-independent-hindustan
2. “Doing England’s Dirty Work,” Independent Hindustan, 1 (no. 2, October 1920), 29.
3. Ibid.
4. Vivek Bald, “Desertion and Sedition: Indian Seamen, Onshore Labor, and Expatriate Radicalism in New York and Detroit, 1914-1930,” in The Sun Never Sets: South Asian Migrants in an Age of U.S. Power, 82.
5. “Move to Oust Many Hindus,” The Washington Post, July 30, 1920, 6.
6. “Doing England’s Dirty Work,” 29.
7. Ibid., 32.
8. Ibid.
Kritika Agarwal is a doctoral candidate in American Studies at the University at Buffalo (SUNY). She is currently working on her dissertation titled, “Uncertain Citizenship: Race, Empire, and the Denationalization of Asian Americans in Twentieth-Century United States” She can be reached at kritikaa@buffalo.edu.