A tale in two parts.
By Sharmadip Basu | 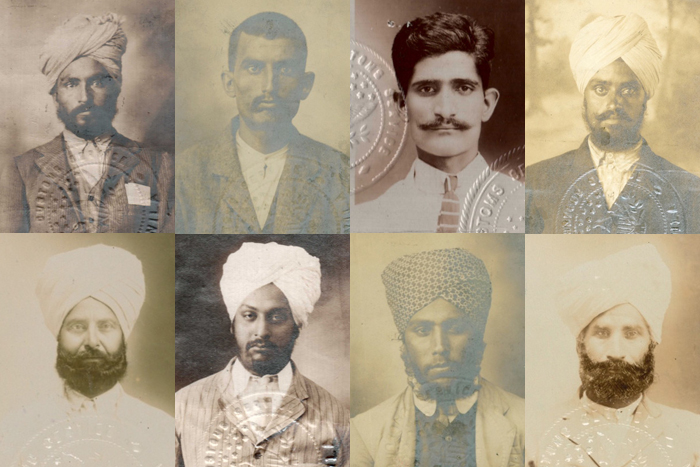 As the twenty-two Hindus remained interned on Angel Island, their counsel, Timothy Healy, went to work on two ends: arranging bail bonds for them, so that they could proceed mainland and remain free until their case was decided; and securing affidavits on behalf of his clients from other Hindus already in America, and from prospective employers. This last effort was critical. For the case for the immigrants’ deportation built by the Immigration Bureau rested on the contention that there was no demand for their labor on the west coast, and that "there exist[ed] strong prejudice against them in the locality."

Around the second week of August, the bail bonds began coming in. They had been executed by the Chicago-based Illinois Surety Company’s San Francisco branch, and the bail money had been set at $500 for each detainee. By the end of the month, all, except the seven afflicted with uncinariasis, had been released from detention on Angel Island under conditions put forth in their bail. On the other front, the gathering of evidence and affidavits vouchsafing eventual employment in the region for the immured Hindus was proceeding apace. And the expediency with which this was happening speaks to the cohesiveness of the social networks of Punjabi laborers already in place by the second decade of the 20th century on the American west coast. The support of compatriots in the region for the twenty-two Hindus had been strong and swift. Consider this as an example: on August 9, just a week after Gulam Nabi, the Persia group’s lone Muslim, had been arrested and interned on Angel Island with hookworm disease, a telegram arrived in San Francisco from one Mandhi Khan in Jungo, Nevada—most likely a laborer in the area’s silver mines. Addressed to the "Emmergration Commissioner," [sic] it read: "If Ghulami[,] son of Butta[,] village of Garhshanker[,] in quarantine[,] please let him out[.] If you want bonds[,] fifty men here responsible for this man will give bonds for any sum required[.] Do not return him[.]"

This show of support had Commissoner Backus concerned. On August 20, he shot off an anxious telegram of his own to the Commissioner General of Immigrations in Washington D.C., Anthony Caminetti. "Voluminous evidence [have been] presented by attorneys[,]" he informed, "supported by affidavits of prospective employers showing that ‘Hindu’ labor is needed and desirable and that Hindus are not objectionable to the State [of California]. My views are opposed to this…" Could the Commissioner General’s office, asked Backus, "furnish from its own records evidence necessary to offset [the] showing made?...Matter is important as attorneys announce will carry cases to courts [sic]. Wire answer." Caminetti obliged two days later, urging the San Francisco office to gather and fashion counter-evidence with vigor, but regretting the lack of such in Washington. With nothing forthcoming from the Bureau headquarters, Backus began his own enquiries. On the bright side for him, the processing of deportation warrants for the twenty-two Hindus was already in motion. 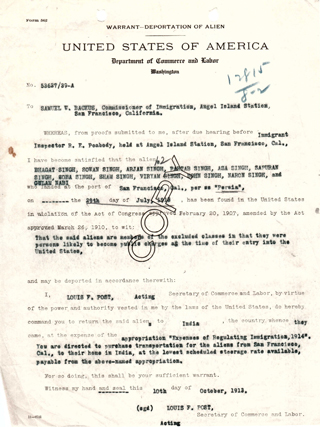 And the west coast press and white public opinion was firmly aligned with his actions. Their anti-‘Hindu’ prejudice had shown no sign of abatement since the specter of a ‘Hindu invasion’ and ‘dusky peril’ was raised half-a-decade or so back.

This is how the matter seems to have remained poised for more than a month, until, on October 10, the Department of Labor ultimately issued warrants authorizing the deportation of the Hindus. Messrs. Healy and McNab, their counsel, and the Illinois Surety Company, their bond executor, were informed and asked to "deliver" their twenty-two clients by "Friday, October 17…for deportation on the s/s ‘Persia[,]’ October 18, 1913." After almost three months of both holding out and being in limbo, the fate of the Hindus seemed sealed. As a last gasp effort to stall the impending deportation, Timothy Healy, on October 15, filed applications for the writ of habeas corpus at the U.S. District Court for the First Division of the Northern District of California.

Two days passed, there was no response. Then, on October 18, as "preparations were being made to deport the Hindus," events took a dramatic turn. News arrived that the court had agreed to hear their habeas corpus petition. Federal Judge M.T. Dooling had ordered a stay on proceedings "in order that an opportunity might be given to show cause why the writ should not issue." Backus and the Immigration Bureau’s efforts at deporting the Hindus, and making it exemplary, before the matter reached court had been thwarted at the very last moment. This outcome, going by the subsequent official exchanges, seems to have caught the Bureau of Immigration, underprepared for a legal challenge. After some negotiations between Healy and the government attorneys over dates, the hearing was finally set for November 17. And with it commenced a lengthy juridico-legal tussle, one that would drag on through the federal courts of northern California for nearly two years.

On the appointed day, the stage was set: Commissioner General Caminetti had arrived from Washington D.C. to join Samuel Backus at the District Court in San Francisco. The crux of the arguments presented before Judge Dooling at the inaugural hearing turned on a single point—the status of migration through the country’s insular possessions in the Pacific. Defending the decision to deport the detainees, government attorneys argued that admittance into the Philippines Islands ought not to guarantee the same into mainland America. Proving one would not become a public charge in the former was not automatically extensible to the latter context, given the higher costs of living, labor market conditions, and hostile social attitudes towards the Hindus in the United States On the other hand, Healy and McNab, representing the Hindus, contended that "they are no more subject to immigration restrictions in coming to San Francisco from Manila after being admitted at the latter port, than alien laborers would be in shipping from New York to New Orleans after having been passed at Ellis Island."

Judge Dooling’s ruling at the end of proceedings was inconclusive. He refused to ratify the en masse deportation of twenty-two Hindus. For this would mean excluding the Hindus as a race. And, with no legal provision existing yet to ground such action, it would tantamount to blatant overreach of the Bureau’s power and jurisdiction. Perceiving this temporary relief for the Hindus as a setback for the government, the San Francisco Call announced the next day: "Hindus Win Points in Judge’s Ruling." Dooling, however, had not ruled in favor of the habeas corpus petition either. Deciding to continue hearing the case, he, instead, gave the government three weeks’ time to furnish more evidence to substantiate its charge. Critically, since the Hindus could not be deported as a group, Dooling recommended that the Immigration Bureau frame separate charges for each individual detainee. The next hearing was fixed for December 5.

This time the proceedings produced a judgment. Slamming the window of hope that had opened up for the twenty-two Hindus firmly shut, Judge Dooling ruled against their writ of habeas corpus. Reframing the case as one against individual detainees had produced the desired result for Backus and the Bureau. The legal pathway for deportation had been cleared. And, once again, the Hindus chose to appeal the decision. After a wait of fifteen months, on March 18, 1915, their appeal—‘Healy v. Backus’—came up for hearing at the Circuit Court of Appeals, Ninth Circuit. 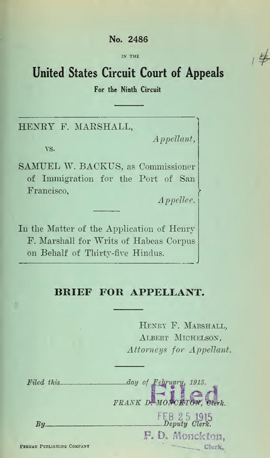 The outcome, however, was the same. The District Court ruling was upheld, and Justice Wolverhampton, who authored the opinion of the court, closed with the following statement: "We conclude, therefore, that the testimony adduced in the present case was sufficient in character and effect upon which to predicate the findings of the immigration officers, and such findings must be held to be final and conclusive."

The paper-trail concerning the case of twenty-two Hindus becomes suddenly thin after the Circuit Court decision. From contemporary newspaper reports, one gathers that it subsequently mutated and became party to another case, which supplanted it in the print media. This new case involved thirty-five Hindus, who, having arrived at Angel Island Immigration Station in late-1915 via Manila, were facing exactly the same predicament as their twenty-two predecessors—their plea at the same Circuit Court had been turned down. But this group managed to make a consequential headway that had, most likely, eluded the previous bunch. Represented by attorney Henry Marshall, they managed to secure a hearing at the Supreme Court.

Ironically, on February 21 1917, a couple of weeks after the U.S. Congress passed the Asian Barred Zone Immigration Act, practically smothering legal migration from almost all of Asia, following communique appeared in newspapers under the headline ‘US Admits Error in Excluding Manila Hindus’: "The department of justice today notified Timothy Healy…that it would file on March 6 with the Supreme Court a ‘confession of error’ in the stand taken four years ago when 22 Hindus on arrival here were ordered deported. They arrived from Manila and the U.S. officials held they had no right to enter. This latest move will end the case." Finally, on March 6, 1917, almost four years since the twelve Punjabi migrants were arrested on arrival at Angel Island, the Department of Justice admitted before the apex court that it had been wrong in detaining and deporting subjects of the British Empire who entered mainland U.S. through its insular territories, and withdrew all relevant cases. However, as the Asian Barred Zone Act put the squeeze on labor migration from Asia, this gesture remained only that—a gesture without substance.


***
My primary source for reconstructing the chain of events that followed after the first batch of twelve Hindus were detained upon arrival in the U.S. are the Angel Island immigration case-files.1 These papers offer us a fascinating time-lapse view successive episodes in the case of twenty-two Hindus. We see up-close, the various executive and legal investments at play around the issue of Hindu immigration at the time. We see how the regulatory apparatus of immigration, at its highest echelons, was driven explicitly by anti-Asian/anti-Hindu racism. Most illuminatingly, perhaps, we also get dense biographical snapshots—captured under tenuous circumstances of an immigration interrogation, mediated by a translator—of those Punjabi migrants arrested and detained at Angel Island. From these transcripts, we get to know how old they were, which village they came from, their marital status, how much money they had, other places outside the subcontinent they had been to, and so on. Indeed, the Angel Island case-files lift these otherwise faceless, anonymous figures of History to its surface, like bubbles that then disappear somewhere in the west coast of early-20th century America.
1. These case-files, along with others, are held by the National Archives and Record Administration at their San Francisco location. Digital copies of these files—specifically, those of the Persia group—are hosted at SAADA.
Sharmadip Basu has a Ph.D. from Syracuse University’s Social Science Program. His research focuses on music in the colonial encounter, and interrogates the formation of modern musical subjectivities in South Asia. He has taught in the American Culture department at University of Michigan, Ann Arbor.