The Case of Twenty-Two Hindus (Part I)


A tale in two parts.
By Sharmadip Basu |

On July 29, 1913, thirteen men, all from the Punjab province in British India, alighted at the Angel Island Immigration Station in San Francisco Bay, seeking entry into the United States. The group, comprising twelve Sikhs and one Muslim, had sailed on S.S. Persia from Manila, Philippines, then an insular territory of America. Most of them were farmers, anticipating some kind of wage-labor in the U.S., with the hope of climbing the “agricultural ladder” in time. Some wished to get into business. For some, this was their second trip to America, having worked a few years earlier in farms and factories on the west coast.

The arrival of the ‘Hindus’—as natives of British India were generically called in the U.S., regardless of their religious affiliations—made news in local dailies the next day. This was for two reasons: one, because, traveling aboard the Pacific Mail Steamship Company-owned S.S. Persia, they had been part of a benchmark voyage. While the Persia was a veteran of transpacific journeys, this particular trip had seen it ferry the largest ever number of ‘steerage passengers’ from Asia to the U.S. Of the 330-odd passengers aboard the ship as it left Yokohama, its last port of call in Asia, 297 were packed into in the refitted space between the vessel’s main deck and main cargo-hold—its steerage—the cheapest passage one could buy. 129 of them were Filipino laborers headed for the sugar plantations of Hawaii, also an insular possession of the US then. As for the rest of the steerage passengers, the presence of a “large number of Japanese picture brides and about a score of Hindus” was especially noted in the press. Six or seven amongst this score must have joined the Filipino laborers in disembarking at Honolulu, for only thirteen were finally recorded to have arrived at Angel Island—America’s gateway on the West Coast. The second reason why their arrival made news in the West Coast dailies was because all of them were detained at the station immediately after disembarking, pending arrest.

The ground on which the thirteen Hindus were held was the most common one forwarded by the Immigration Bureau to keep “undesirable aliens” from Asia out of the U.S.—that they were “likely to become public charges,” burdens on the American taxpayer. And the stated reason why they were deemed liable by immigration officers to become such was "that they are of the laboring class, that there is no demand for such labor and there exists a strong prejudice against them in this locality.” This despite the fact that in Manila, each detainee had been issued a form Five Forty-Six—an “Alien Certificate—Insular Territory”— 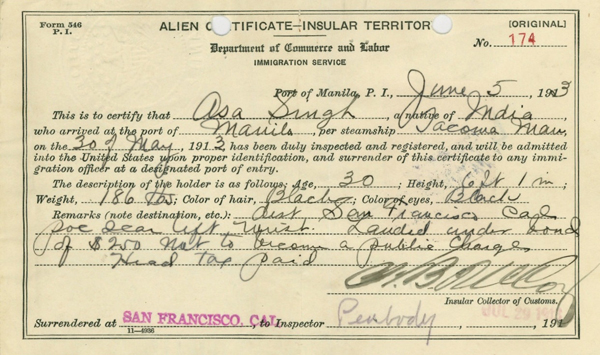 by the U.S. Immigration Service, as and when they had arrived in the Philippines. This document certified that its bearer had been “duly inspected and registered, and [would] be admitted into the United States upon proper identification, and surrender of [the] certificate to any immigration officer at a designated port of entry.” Moreover, on each form Five Forty-Six, it was also noted that they had paid $250-guarantee against becoming a public charge in the Philippine Islands. And there was, of course, the mandatory ‘head tax,’ which also had been paid by all.1

None of this, however, impressed immigration officials at Angel Island. Indeed, it was precisely the arrival of 'Hindu' migrants in the United States via the Philippines, after having secured an Alien Certificate there, which was their target. The concomitant bureaucratic reasoning, the medical discourse, framing of legal processes, etc., were all harnessed to pull in the same direction. This was a means to legally and executively plug the transpacific leak in the Philippines and the Hawaiian Islands, through which Asian migrants made their way to the West Coast of the U.S.

Over the next two days, July 30 and August 1, the thirteen Hindus were individually interrogated by the Immigration Inspector R.E. Peabody. They were then formally arraigned, and taken into custody—all except, curiously, one Naram Singh, who either chose to self-deport, or was allowed entry—which, we do not know. The arraignment was based on a warrant authorized and telegrammed overnight by the Acting Secretary of Labor, A.B. Densmore, in Washington D.C. on July 30. He had acted expediently upon receiving an urgent request for the warrant’s issuance from Samuel Backus—the Commissioner of Immigration, port of San Francisco, and a zealous opponent of “‘Asian migration’ from ‘all its standpoints.”2

Almost exactly the same sequence of events played themselves out once again a day later, on August 2, when S.S. Korea, another steamer in the Pacific Mail Steamship Company’s Asian fleet of six, with ten Hindus aboard, dropped anchor in the San Francisco Bay. All ten were arrested upon arrival and detained at Angel Island. Together with the Persia group, the total number of Hindus now in custody, facing deportation, stood at twenty-two. All twenty-two chose to respond to the Immigration Bureau’s show-cause, as to why they should not be deported, in the court of law. They were represented by the firm of Healy and McNab in two groups: the Persia twelve, comprising “Sham Singh, Soba Singh, Sapuran Singh, Asa Singh, Viryam Singh, Bhagat Singh, Sowan Singh, Arjan Singh, 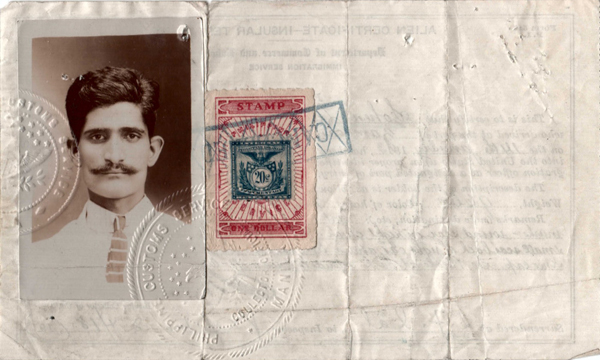 Sohn Singh, Naron Singh, and Ghulam Nabi”; and the Korea ten: Sundar or Sundu Singh, Naron Singh, Bishan or Bishen Singh, Foman Singh, Jagat or Jagot Singh, Jamit or Jawat Singh, Mada Ram or Mado Pan, Ferroz Khan, Mahbub or Mahbut Ali, and Abdoolah or Abdulla Khan.” The situation was doubly dire for seven among them—five from the first group, and two from the second. They had been diagnosed with uncinariasis, or to be carrying hookworms—deemed a “dangerous, contagious disease” and a threat to public health in America. After “public charges,” this was the next-most common reason why Asian immigrants were ordered deported from the U.S. The only legitimate way to evade this outcome was to admit oneself for treatment under quarantine into Angel Island’s hospital facilities, and bear the expenses accrued. Which is exactly what the concerned seven did.


Continue reading 'The Case of Twenty-Two Hindus (Part II)'...
1. Both the “public charges” clause and the head tax were introduced as a part of the Chinese Exclusion Act of 1882—the first explicitly racist immigration law passed by the U.S. Congress.
2. Erika Lee and Judy Yung, Angel Island: Immigrant Gateway to America (New York: Oxford University Press, 2010), 42.
Sharmadip Basu has a Ph.D. from Syracuse University’s Social Science Program. His research focuses on music in the colonial encounter, and interrogates the formation of modern musical subjectivities in South Asia. He has taught in the American Culture department at University of Michigan, Ann Arbor.