By Michelle Caswell |
When Samip Mallick and I started SAADA in 2008, we made a purposeful decision that we wanted the archives we created to remain an independent nonprofit organization, unaffiliated with a larger university or institutional repository, and to reflect the unique interests, needs, and priorities of diverse South Asian American communities across the country. 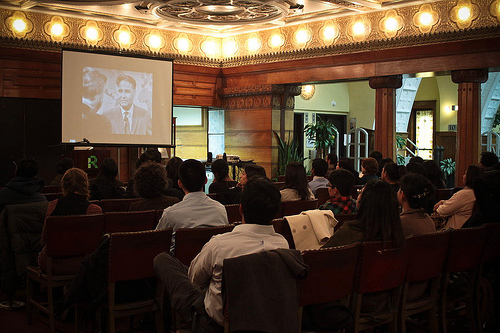 We continue to see SAADA as part of a growing movement of independent grassroots efforts emerging from within communities to collect, preserve, and make accessible records documenting their own histories outside of mainstream archival institutions. These community-based archives serve as an alternative venue for communities to make collective decisions about what is of enduring value to them, to shape collective memory of their own pasts, and to control the means through which stories about their past are constructed.

Power is central to this conversation. As U.K. archival scholars Andrew Flinn, Mary Stevens, and Elizabeth Shepard note, independent grassroots archival efforts first sprung up in response to the political and social movements of the 1960s and 1970s. Flinn, Stevens, and Shepard provide a broad working definition of community archives as "collections of material gathered primarily by members of a given community and over whose use community members exercise some level of control (Flinn, Stevens & Shepard 73)." They also found that political activism, community empowerment, and social change were prime motivating factors undergirding these fiercely independent archival efforts (Flinn, Stevens & Shepard 73). Indeed, in remaining independent and encouraging community participation, SAADA strives to provide a platform in which South Asian Americans are empowered to make decisions about archival collecting on their own terms, ensuring their own priorities will not be buried under the weight of competing priorities within larger mainstream institutional archives. This need to uncover and provide a platform for previously marginalized voices unites community-based archives and distinguishes them from local geographically based historical societies, in my opinion.

An example of the difference between how a community-based archive like SAADA and a mainstream institutional repository might treat the same record can be found in the 1907 Letter from A.W. Mangum, Jr. to his mother. The letter, written by a white scientist who witnessed the anti-Indian riots in Bellingham, WA, is housed at the University of North Carolina at Chapel Hill, where is it part of a much larger collection of materials documenting 200 years of the Mangum family. While UNC’s finding aid for the collection does a commendable job of mentioning the riots A.W. Mangum, Jr. witnessed, the riots are clearly not the main focus of the description.

By contrast, SAADA’S digital copy of the letter (which was graciously made available by UNC), primarily describes the letter as it relates to the Bellingham Riots, groups it with other materials related to the riots, and allows researchers to easily connect between the Letter from A.W. Mangum, Jr. and other materials about anti-Indian violence. In other words, SAADA views the letter through a South Asian lens, while a mainstream repository reflects other interests and has other areas of expertise.

Some recent archival studies scholarship has reported a rise in “ethnic archiving” in the U.S., both in mainstream institutions and community-based groups (Daniel 82-104). However, it is important to note that many grassroots collecting efforts are based on other, non-ethnic definitions of community. Examples include archival collecting projects based in communities defined by sexual and gender identities (Gerber/Hart Library and Archives and Lesbian Herstory Archives), religious belief, political affiliation (South African History Archives), language group (The Yiddish Book Center), and social class (Working Class Movement Library).

Furthermore, while the community-based archives label is useful in describing a growing trend (and perhaps a burgeoning social movement), it is important to complicate any notions of community as singular, fixed, and uncontested. Clearly within communities unified by a larger identity (such as South Asian American), there is considerable disagreement about whose stories matter, how to tell those stories, and why or even if we should tell them to a larger audience. In creating SAADA, we strive to build an archives large enough to accommodate all of the messy details and complications of community.