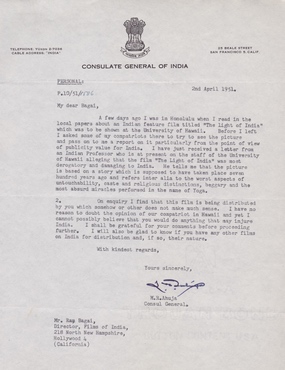 DESCRIPTION
"Correspondence between Ram Bagai and M.R. Ahuja, the Indian Consul General in San Francisco, that took place eight years after Bagai opened “Gyandev of India” in New York City. After 1943, Bagai showed Gyandev at various cinema art houses, Indian-American cultural events, and universities, including the University of Hawaii in 1951. An Indian professor there who viewed the film complained to the Consulate that the film perpetuated negative Indian stereotypes of caste, untouchables, beggars, miracles, etc., and this complaint touched off a controversy. After holding a private showing of Gyandev for Ahuja, Bagai agreed to Ahuja’s request to pull the film from circulation in the interest of Indian-American relations. Madame Vijaya Lakshmi Pandit (Nehru’s sister) even wrote to voice her approval of withdrawing the movie from circulation (but happened to quote the wrong movie in her letter, incorrectly referring to “Kangan” instead of “Gyandev”). Nonetheless, appeasing the Indian Government in this way clearly exasperated Bagai. Gyandev originally ran for Indian audiences and had been a hit in Bombay and Calcutta for over a year. The Indian government had initially given Bagai their blessing and unqualified support for bringing it to the West in 1943 and Mrs. Pandit saw it at its opening in NYC and expressed her favorable opinion back then before later withdrawing her support." -- Rani Bagai