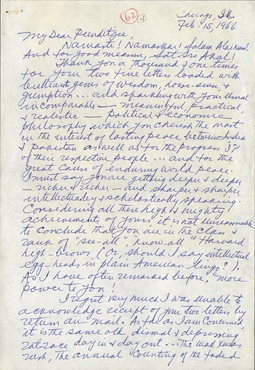 Thank you a thousand & one times For your two fine letters loaded with Brilliant gems of wisdom, [?], & Gumption… and sparkling with your [?] Incomparable Ð meaningful, practical, & realistic- political & economic philosophy which you cherish the most w the intent of lasting peace between India and Pakistan as well as for the progress [?] of their respective people… and for the great cause of enduring world peace. I must say Jonace getting deeper & deeper -richer and richer- and sharper and sharper intellectually & scholastically speaking. Considering all the high & mighty Achievements of yours, it is not unreasonable, To conclude that you are in the clan & Rank of "see-all," "know-all" Harvard high-brows (Or, should I say intellectual egg-heads in [?] American lingo?). As I have often remarked before, "more Power to you!

I regret very much I was unable to Acknowledge receipt of your two letters by Return air-mail. As far as I am concerned, It is the same old dismal & depressing Rat-race day in & day out… The [?] [?] [?], The annual counting of the faded India Jewels, bookkeeping, accounting & so Forth, not to mention the [?] [?] Business. So I never seem to get much Space time to set down peacefully, relax Read, or write letters during these [?] Days. Nonetheless, whenever I find a few Spare moments, I do make a solid Effort (even though partially wishy-washy) To write you a few times. In the field of my Letter-writing, you occupy a top-ranking Position.

Glad to know that Doc has "accepted The whole thing gracefully " & that he has Taken his great loss courageously & in an Admirable philosophic [?]. Well, there Is no point in brooding over it. I was Delighted to learn from his recent letter that He & his good friend, The [?], are Making plans for a trip to Europe sometime During the coming summer season. This Change & travelling will indeed do him a Lot of good & I know he will be richly rewarded By this fascinating & exciting experience.

Your very dear friend- The one & Only Ajut Singh [?] - The melodious Nightingale of India- was here a couple Of weeks ago to take part in the annual Sporting Goods Show which was held in The P. House prior to the opening of the [?] Show last week. He had a suite at the new luxurious Holiday Inn on Lake Shore Drive & Ontario St. The day Before his departure to New York he came to the Shop and asked me to prepare lamb & turnip curry With fresh ginger for him & his friend "Lucky" From Columbus, Ohio. So I spent 4 hours Preparing this delectable [?] dish, lentil [?] with tomatoes, onions, & garlic, & of course the ubiquitous pullaow [?] for him & his pal. We all enjoyed this sumptuous [?] - [?] for the gods, so to speak. And he brought some frozen Lebanese bread [?] which that "Lucky" bird heated in the oven. They tasted so delicious with my [?]. Ajut was supposed to return here last Saturday & he made a date with me for steamed fish [?] in Chinatown but he never did show up. Perhaps, by now, he is attending an important "Conference" & cooking up a big deal in Hong Kong. He called you up from New York & talked with you for a half hour but this [?] came over to the shop after having spent 5 days here (he never even called me up to say hello.). I guess [?]. So there you are! Prime Minister Shastri's sudden death After signing a "non-aggression pact" With [?] in Tashkent was unquestionably A tremendous loss to India. I fully agree With your thoughts & comments in respect to him as expressed in your letter. Beyond doubt, he was a true, sincere, peaceful but, [?] realistic & far-seeing able statesman. When he first took the helm of the Govt of India After the demise of the prime minister N?hru, he did Not impress me much. He seemed to be too Meek, quiet, reserved & deeply engrossed In the old Gandhian legacy of absolute Humility & total non-violence. But then When the Pakistanis were infiltrating And advancing in Kashmir from the south West toward Jammu & ultimately Srinagar, He gave a very impressive evidence of firmness, Stability, & shrewd military thinking by Opening the retaliatory attack on Lahore. This determined powerful move stopped the Pakistani forces cold from further advancing In Kashmir as they were forced to concentrate On Lahore for its defense which was much More important than the Vale of Kashmir so [?] diversionary move of opening the Lahore front, in my opinion, actually saved the much coveted Kashmir Valley from falling to the threatening & fast-moving Pakistani forces. On the other hand, had Red China not given an ultimatum to India- at the critical time when the Indian forces were almost ready to march Into the dirty old Anarkali Bazaar- To clean out of its many posts near the Sudo- China border within 3 days or "face the Consequences", the Indian army backed By tanks and air power stopped right then And there from further advancing to Lahore And Kashmir fronts. And the spasmodic See-saw fighting between the two countries Which followed thereafter brought no Tangible gain to either one. Under these Circumstances, & in as much as Red China Offered no military aid to [?] (as Expected by the Pakistani invaders), it Was not feasible and advantageous for Ayub to continue on with this frustrating Fighting for the time being & so he later Accepted the offer from Kosygin to have a Peace conference with Shastri in Tashkent. And It was a good thing that the two leaders did Get together & at least made some sort Of an agreement to terminate the [?] Hostilities even though it did not solve The basic problem of Kashmir which resulted In the Indo-Pakistan Warfare. I hope that The leaders of both countries will make an honest Effort to implement effectively the Tashkent
Agreement & that they will learn the line Together, work together, & build together like Human beings in the interest & welfare of Their respective people.

Our good old scholarly friend, Dr. Bhagat Singh Thind, in his annual Christmas greetings message, said in part: "The unprovoked invasion of India by Pakistan has been most painful to us. The two countries were one only a few years ago & people. lived as brothers. As long as Pakistan remains a theocratic state, it will be impossible for it to live with India, a secular & democratic state, as peaceful neighbors. Democracy joins people while theocracy divides & brutalizes. The shocking outrage committed by the Ayubi Pakistan a military dictatorship on India has been disgraceful…" commenting on his aforesaid analysis of this imbroglio, I too wrote him a little note along with my Christmas greetings, which expresses my forthright at & [?] opinion of this entire [?] created by our own brilliant intellectuals but politically weak & imbecilic leaders. Enclosed is a copy of it for your dusty, musty, & moldy files. After reading this, I hope you will, at least slightly if not fully, change your opinion regarding my [?] & not brand me as being [?]

I hope this will find you in excellent Sparkling spirits & enjoying the intoxicating aroma Of red roses, yellow tea roses, and pink lotus blossoms Emanating from fragrant & enchanting MacArthur Peak. With kindest regards, & all good wishes to you Senor Walter, Doc, & The [?] (if they have returned from

Greetings!
Regarding your comment on the recent [?] Indo-Pakistan War in your Christmas Greetings, I should like to point Out that the trouble there is certainly not Between theocracy on the one hand & Secular democracy on the other, or whether India is a democratic secular Hindu State & Muslim Pakistan is under a Military dictatorship.

Beyond doubt, the major issue In this case & the principal bone of [?] In the beautiful, picturesque, & the fertile Valley of strategic Kashmir, majestic Gulmarg , the entire flow of river Jehlum, the enchanting Shalimar Garden, & the fabulous Naseem Bogh of the old Mughals. And I must say that this tragic upheaval & the growing hatred between India & Pakistan is a direct off-shoot of the disastrous partition of India as arbitrarily accepted by a quarter of a dozen scholarly Hindu intellectuals- (utterly lacking political foresightedness, [?], stability , & the requisite guts & determination to fight for our cherished goal of a United India ) -against the profound wishes of the late Mahatma Gandhi, the thinking relentless proponents of a United Republic of India , such as Khan Abdul Ghaffar Khan (The Frontier Gandhi), Dr. Saifuud-Din Kitchlew (The "Lion of Punjab"), who led the historic campaign for Hindu-Muslim unity & solidarity back in the year 191, the brilliant Mr. [?] Ale, our own steadfast leaders in India & abroad as well as against the wishes of the vast majority of the Indian people … Thus recognizing the two nation theory as advanced & advocated by Mr. Jinnah & thereby carving out & setting up the Muslim state of Pakistan which brought about so much destruction & economic ruination, the loss of 3 million innocent lives, & gave rise to so many dangerous problems of one kind or another.

Now inasmuch as neither India is Willing to part with Kashmir nor Pakistan Whether theocratic or secular & whether democratic Or dictatorial [?] form of government issues [?] to renounce its aim by taking over or annexing the lovely Valley of [?] under the circumstances, I donÕt see how this difficult & explosive problem can be solved to bring about enduring peace between the two countries. That is the basic & sole issue [?], & that is the main problem for the time being.

In my judgment, only a democratic Federation of India & Pakistan leading ultimately To their political and economical unification for the Establishment of a powerful "United States of India" can bring about lasting peace, full Progress & boundless prosperity in our ancient Homeland which has been conquered by Foreign invaders in its historic part but never Partitioned so rashly, recklessly, & stupidly.