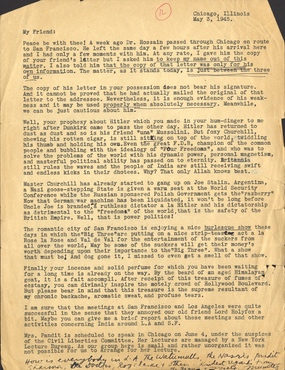 Chicago, Illinois May 3, 1945. My Friend: Peace be with thee! A week ago Dr. Hossain passed through Chicago en route to San Francisco. He left the same day a few hours after his arrival here and I had only a few moments with him. At any rate, I gave him the copy of your friend’s letter but I asked him to keep my name out of this matter. I also told him that the copy of that letter was only for his own information. The matter, as it stands today, is just between the three of us. The copy of his letter in your possession does not bear his signature. And it cannot be proved that he had actually mailed the original of that letter to the addressee. Nevertheless, it is enough evidence of his weakness and it may be used properly when absolutely necessary. Meanwhile, we can just be cautious about him.

Well, your prophesy about Hitler which you made in your hum-dinger to me right after Dunkirk came to pass the other day. Hitler has returned to dust as dust and so is his friend “una” Mussolini. But foxy Churchill, chewing his rotten cigar, is still siting on top of the world, twiddling his thumb and holding his won. Even the great F.D.R, champion of the common people and bubbling with the ideology of “Four Freedoms”, and who was to solve the problems of the world with his dynamic power, personal magnetism, and masterful political ability has passed on to eternity. Britannia still rules the waves and the people of India are still receiving swift and endless kicks in their dhotees. Why? That only Allah knows best.

Master Churchill has already started to gang up on Joe Stalin. Argentina, a Nazi goose-stepping State is given a warm seat at the World Security Conference while the Russian sponsored Polish Government gets the “razberry” Now that German war machine has been liquidated, it won’t be long be fore Uncle Joe is branded as a ruthless dictator a la Hitler and his dictatorship as detrimental to the “freedom” of the world, that is the safety of the British Empire. Well, that is power politics!

The romantic city of San Francisco is enjoying a nice burlesque show these days in which the “Big Three” are putting on a nice strip-tease act a la Rose la Rose and Val de Val for the entertainment of the suckers from all over the world, May be some of the suckers will get their money’s worth depending upon their importance to the “Big Three” What a show that must be! And dog gone it, I missed to even get a smell of that show

Finally your incense and solid perfume for which you have been waiting for a long time is already on the way. By the beard of an aged Himalayan goat, it is a fait accompli. After receipt of this treasure of fumes of ecstasy, you can divinely inspire the motely crowd of Hollywood Boulevard. But please bear in mind that this treasure is the supreme resultant of my chronic backache, aromatic sweat, and profuse tears.

I am sure that the meetings at San Francisco and Los Angeles were quite successful in the sense that they annoyed our old friend Lord Holyfox a bit. Maube you can give me a brief report about these meetings and other activities concerning India around L.A and S.F.

Mrs. Pandit is scheduled to speak in Chicago on June 4, under auspices of the Civil Liberties committee. Her lectures are managed by a New York Lecture Bureau. As our group here is small and rather unorganized it was not possible for us to arrange for her lecture.