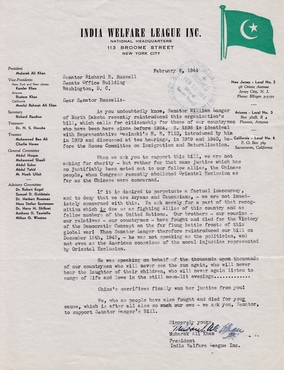 Letter from Mubarek Ali Khan to Senator Richard B. Russell

DESCRIPTION
Letter dated February 8, 1944 from Mubarek Ali Khan, President of the India Welfare League, Inc., to Senator Richard B. Russell, Chairman of the Senate Committee on Immigration. Khan urged Russell to support Bill S. 1595, which if passed would permit the naturalization of Indian nationals in the United States. Khan cited that the Chinese were able to become naturalized citizens, and many Indians gave their lives fighting for democracy with America during World War Two.

As you undoubtedly know, Senator William Langer of North Dakota recently reintroduced this organization’s bill, which calls for citizenship for those of our countrymen who have been here since before 1924. S. 1595 is identical with Representative Lesinki’s H. R. 7110, introduced by him in 1939 and discussed at two hearings, in 1939 and 1940, before the House Committee on Immigration and Naturalization.

When we ask you to support this bill, we are not asking for charity – but rather for that same justice which has so justifiably been meted out to our fellow allies, the Chinese people, when Congress recently abolished Oriental Exclusion as far as the Chinese were concerned.

If it is desired to perpetuate a factual inaccuracy, and to deny that we are Aryans and Caucasians, - we are not immediately concerned with this. We ask merely for a part of that recognition which is due us as fighting Allies of this country and as fellow members of the United Nations. Our brothers – our cousins – our relatives – our countrymen – have fought and died for the Victory of the Democratic Concept on the far flung battle fronts of this global war! When Senator Langer therefore reintroduced our bill on December 15th, 1943, - he was not speaking as the politician, and not even as the American conscious of the moral injustice represented by Oriental Exclusion.

China’s sacrifices finally won her justice from you!

We, who as people have also fought and died for your cause, which is after all also so much our own – we ask you, Senator, to support Senator Langer’s Bill.