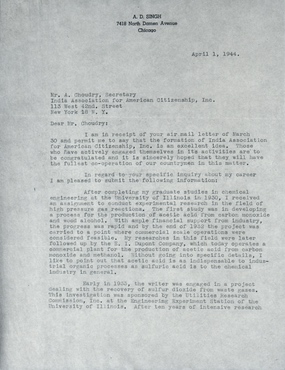 Letter from A.D. Singh to A. Choudry

DESCRIPTION
Letter written April 1, 1944 from A.D. Singh to A. Choudry, Secretary of India Association for American Citizenship, Inc. in response to a request for biographical information on Singh, a chemical engineer. Singh disclosed several of the projects he worked on in the past and at the time of writing.

Dear Mr. Choudry:
I am in receipt of your air mail letter of March 30 and permit me to say that the formation of India Association for American Citizenship, Inc. is an excellent idea. Those who have actively engaged themselves in its activities are to be congratulated and it is sincerely hoped that they will have the fullest co-operation of our countrymen in this matter.

In regard to your specific inquiry about my career I am pleased to submit the following information:

After completing my graduate studies in chemical engineering at the University of Illinois in 1930, I received an assignment to conduct experimental research in the field of high pressure gas reactions. The first study was in developing a process for the production of acetic acid from carbon monoxide and wood alcohol. With sample financial support from industry, the progress was rapid and by the end of 1932 the project was carried to a point where commercial scale operations were considered feasible. My researches in this field were later followed up by the E. I. Dupont Company, which today operates a commercial plant for the production of acetic acid from carbon monoxide and methanol. Without going into specific details, I like to point out that acetic acid is as indispensable to industrial organic processes as sulfuric acid is to the chemical industry in general.

Early in 1933, the writer was engaged in a project dealing with the recovery of sulfur dioxide from waste gases. This investigation was sponsored by the Utilities Research Comission, Inc. at the Engineering Experiment Station of the University of Illinois. After ten years of intensive research in fundamental and applied phases of the work, a successful process was developed to recover sulfur dioxide from boiler furnace and other waste gases at an estimated cost which compared quite favorably with production costs of the same substance by the burning of pure native sulfur. The object of the above investigation was twofold: (a) to safeguard the health of the populace and protect property from damage in highly industrialized areas, (b) to insure supply of sulfur to the continental United States for at two thousand years in contrast to the fast dwindling sulfur domes, the life of which at present rate of consumption is estimated to be 15 to 20 years. During this investigation, the writer also conducted surveys on the pollution of city air with industrial wastes and aided some municipal and federal agencies in advisory capacity in air pollution problems.

Since the start of the present war I have switched over to problems of immediate importance. One phase of my present work deals with the development of protective techniques to be employed in American cities in case of enemy air action. In the capacity of a technical adviser to the Office of Civilian Defense, Chicago Metropolitan Area, I have completed several important techniques. Perhaps, an important example was the production of oil-phosphorus solution, which in recent Allied operations has been used as one component in an incendiary bomb and also as a flame throwing compound to increase the efficiency of tanks against pill-boxes etc.

The second phase of my present activities deals with the production of activated carbon for gas masks; devising of improved methods for production of metallurgical coke; conversion of coal into gas; production and distribution of liquid CO2 for fire protection at army air ports and other places where fire hazard may prevail; and in the development of a new method for pulverizing coal.

Most of my above given work has appeared in technical journals and has been the subject of several United States and British patents issues from time to time.

Hoping that the above information will be of some service to the cause in hand, I am,