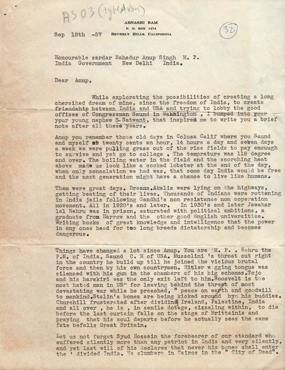 While explorating the possibilities of creating a long chersihed dream of mine, since the freedom of India, to create friendship between India and the USA and trying to lobby the good offices of Congressman Sanud in Washington, I bumped into your young nephew S. Satwant, that inspired me to write you a brief note after all these years.

Anup you remember the old days in Colusa Calif where you Sanud and myself at twenty cents an hour, 14 hours a day and seven days a week we were pulling grass out of the rice fields to pay enouugh to survive and yet go to college. The temperature was 188 degree and over. The boiling water in the field and the scorching heat above made us look like a cooked lobster at the end of the day, when only consolation we had was, that some day India would be free and the next generation might have a chance to live like humans.

Them were great days. Dreams. Akalis were lying on the highways, getting beating of their lives. Thousands of Indians were rottening in India jails following Gandhi’s non resistance non coperation movement. All in 1920’s and later. In 1930’s and later Jawahar lal Nehru was in prison, saturated with political ambitions, a graduate from Harrow and the other good English universities. Writing books of great knowledge and intelligence that the power in any ones head for too long breeds dictatorship and becomes dangerous.

Things have changed a lot since Anup. You are M. P. . Nehru the P.M. of India, Sanud C. M of USA. Mussolini’s throat cut right in the country he build up till he joined the vicious brutal force and then by his own countrymen. Hitler wagging tongue was silenced with his gun in the chambers of his big schemes. Tojo and his hara-kiri was the only exit left to him. Roosvelt is the most hated man in USA for leaving behind the threat of most devastating war while he preached, “peace on earth and goodwill to mankind. Stalin’s bones are being kicked around by his buddies. Churchill frustersted after dividing Ireland, Palestine, India and all over, he is, in senile dotage, sizzeling within, to die before the last curtain falls on the stage of Brittainia and praying that his soul departs before he actually sees the same fate befalls Great Britain.

Let us not forget Syud Hossain the forebearer of our standard who suffered silently more than any patriot in India and very silently, and yet last will of his declares that never his bones shall enter the divided India. He slumbers in Cairos in the “City of Dead”.

Out of all that pitiful, plight of the world, onlt one beacon light emerges for the world. Saint Gandhi, without a stick in his hands, a dollar in his pocket, a soldier in the army he crushed and crumbled the mightiest empire in our recorded times.

Being aware of viciousness of power in one man’s hands, he renounced the worldly might and left Nehru the vanguard of his victories.

According to Hindu mythology Nehru has carried the load like Sheshnag on one finger but now the curtain is changing. Nehru according to his own books, is in the state of confusion, overloaded and overburdened with state responsibilities, is concluding that he is indispensible.

Forign policy, imagine, Nassar, the baby Hitler, his best friend. Defense Krishna Mennon, an upstart ambitious dramatic votegetter without any knowledge of art of diplomacy, creating enemies abroad with eh best friends who would like to see India build up. Good Lord knows all the rest of flatterers and self seeks that he is surrounded with lately. With such surroundings and the environments the man has put India in a situation that pendulum might swing in the favour of the descentents fo Nadirshah, Ghaznavi Chauris to take over the country.

All thesde things have happened in our lifetime, half a century, only a second in the ocean of eternity. With you, Sanud and all others occupied in the eternal inferno of daily routine, I am left to ponder over such uncertainties because, in terms of Good Syud! bless his soul! I sold my soul to Wattumull banya” and yet working for the same wages and under the same heat of 1920’s whither we are going to.

All the freedom that India enjoyed through the sufferings of Gandhis, Lajpatrais, C.R. Das. Nehrus and others is going to be fructifies and blossom under the new democratic constitution or we are going to fight about Gurmikhi, Hindia and other petty fetish problems and before getting Persian and English out of our system Indians will have to start learning Chines and Russians and you and your associates will have to write the glorious history of India_s history on Siberian sands before the century .20th.ends.

That is the question Anup. A serious question. No joking. Myself, adament to my decision, that USA is the best friend India can have, neutral India, will like to see Nehru, follow Gandhi’s steps, turn over the powers to some young one, not so tired old and worn out, become Ashoka who followed Budha.

Let us pray and work for the Atmic force of Gandhi to win in this tottering world instead of Atomivc bomb that is shaping to destroy the world civilization, so that we can have a real peace on earth, India as the leader to show the way.