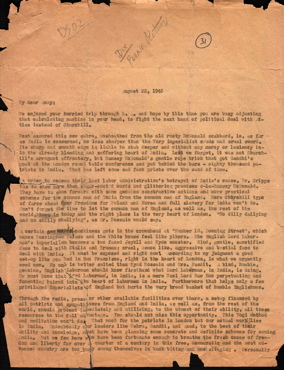 We enjoyed your hurried trip through L.A. end hope by this time you are busy adjusting that calculating machine in your head, to fight the next hand of political duel with Attlee instead of Churchill.

Rest assured this new sabre, unsheathed from the old rusty McDonald scabbard, is, as for as India is concerned, no less sharper than the Tory Imperialist crude and cruel sword. Its sharp and smooth edge is liable to stab deeper and without any mercy or leniency into the already bleeding and suffering heart of India. Lest, we forgot, it was not Churchill’s arrogant affrontery, but Ramsay MacDonald's gentle rope trick that got Gandhi's goet at the London round table conference and put behind the bars- eighty thousand patriots in India. That has left some sad footprints over the sand of time.

In order to redeem their last labor administration's betrayal of India’s cause, Mr. Cripps has to show more than sugar-coated words and glittering promises a-la-Ramsay MacDonald. They have to come forward with some genuine constrictive actions and more practical schemes for the common man of India from the common man of England. Mere Churchill type of farce about Four Freedoms for Poland and Korea and full slavery for India won’t do. Don’t forget the time to let the common man of England, as well as, the rest of the world, kahney le today and the right place is the very heart of London. “No dilly dallying end no shilly shallying,” as Dr. Hossain would say.

A certain amer tainly cockiness gets in the crownhead at “Number 10, Downing Street”, which makes Buckingham Palace and the White House feel like pikers. The English Lord Labor man’s imperialism became a two faced Jeykll and Hyde monster. Kind, gentle, sanctified face to deal with Stalin and Truman; cruel, demon like, aggressive and bestial face to deal with India. It must be exposed and right now: According to my judgment a good set-up like you had in San Francisco, right in the heart of London, is what we urgently need now. No one is better suited than Syud Hossain and Mrs. Pandit. A kind, humble, genuine, English Labor Men should know firsthand what Lord Laberman, in India, is doing. He must know that Lord Laborman, in India, is amree Nazi Lord Haw Haw perpetuating and fomenting hatred into the heart of labor men in India. Furthermore, that helps only a few privileged imperialist of England but hurts the very bread basket of humble Englishman.

Through the radio, pressor other available facilities over there, a setup financed by all patriots and sympathizers from England and India, as well as, from the rest of the world, should proceed immediately and utilizing, to the utmost of their ability, all these resources to the dull advantage. You should not miss the opportunity. This Yogi method and meditation won’t do. That much for the patriots in London but out actual work lies in India. Undoubtedly our leaders like Nehru, Gandhi, and Azad, to the best of their ability and knowledge, must have been planning some concrete and definite scheme for coming India. But we few here who have been fortunate enough to breathe the fresh ozone of freedom and liberty for over a quarter of a century in this free, democratic and the most advanced country are too busy among themselves in back biting and me clinging. Personally

I suggest we all divert our energies in mapping out conception of what kind of a new India we want. Out of everyone's opinion on that subject, we should make a moving picture of it and exhibit it in India. Of course we will have to ignore many convertesial problems. Bring them out as they never existed. Quite hard of course, but in my opinion it could be done especially through many American sympathizers of India’s cause. It had to be done any way, why drag it.

I will give you some of my views on that subject. In my estimations, as well as in the opinion of millions of others, Jinnah and his kind(Hindu or Koslem) the urangzebs of the twentieth century, must vanish. Castes and creeds, sadhus and fakirs must be abolished. Kaulamas, Mulas, mftkhor Brahmin must make room for useful mechanics, engineers, doctors and manufacturers to lubricate the dies out, our-modded, economical machinery of India. None must suck the soul and blood, like leeches out of the ignorant. None shall prey on the half starved skeleton of land.

Customs and traditions miet change with the time. Good, of the ancients, must be repolished and brought into the force front. Dirt, flies, bugs and snakes to be destroyed and in their place, flower gardens and floral arrangements and other aesthetic side of life to be encouraged. Sanitation, education, economies and industry must replace ignorance, superstations, pestilence and famines. Temples, churches, mosques should in no way be a stumbling block on the way of advancement of the state and the nation. By that please don’t misunderstand that I advocate complete destruction and elimination of our noble traditions. Our Indian spiritual knowledge, our traditional hospitality, tranquility of mind: our unselfish quest for family and home happiness and other unparalleled virtues that have kept us intact for centuries, and by the strength of which we have survived even the English extermination process of using gunpowder, machine guns, aeroplanes and other modern destructive contrivances. In fact I for one believe that there's same destructive tools, including the atomic bomb, might finally be the cause of their own destruction, unless they, in the near future, lean towards the natural laws of God And spiritual life of Jesus and Gandhi.
Returning to the subject of our countrymen’s conception of India, for myself I would, for example, touch one subject namely marriage. I believe marriage, as it is today in India, example touch one subject namely marriage. I believe marriage, as it is today in India, should not be the merriment of the moment and myopic mirage of the future. Matrimony should be the mutual emergence of soul, mind, and body leaving behind the moment of joy for the coming generations. Nationally it should be encouraged to blend the invigorating blood of Muslim with pacifist, calm, cool, calculating, blood of the Hindu. Many outstanding genuine leaders, regardless of consequence, should take a lend by demonstrating that - and by the thousand. Not only that we should import a million brides, all healthy handsome and hilarious, from Russia, China, Japan, Germany, Sweden, United States and the other aggressive countries to regenerate and recharge the national “battery of life”. Marriage, when unhappy and not successful, should terminate, In case of death, either side should have full right and in fact certain encouragement to remarry. Nowdoweries and no fake and cumbersome or expensive celebration. Just a solid healthy and sound institution.

You will say this mixing of blood will make us more heterogeneous. No more than it is at present. Aryans, Greeks, Dravidians, Arabs, Turks, Tartars, Persians, Huns, and other

Page 3
Dr. A. Singh
August 23
Scattered their blood in my veins probably for centuries. This “pure Hindu” myth is no more than “pure Anglo Saxon myth” in the United States. Imagine Hebrew, Negro, Russian, Irish, Chinese, English, and scores of other Godly and Ungodly races including American Indians are getting along in this country, the same goes for Russia. Why not in India? Fanning up the foreign, infamous, divide and rule plus lack of education and understanding on our own behalf. Eliminate, and not gently either, the wickedness and the viciousness of the foreign rule as well as the fanning of the same by the internal selfish elements that one courage it merely for its own advantage.

Naturally you will say it sounds like Utopian fantasy but unpractical for India. Certainly it is hard. But billions of our race, during the past century, have perished in chains of slavery and ignorance, millions have died in a few months, even recently, with famine and pestilence. Our nation must face the fact and make this sacrifice to avoid any further prolongation of that unhappiness. Cancer must be removed by cruel operation which ultimately is fruitful. Marriage in only one line.The same applies to religion, coming children and the youth of New India, new farmer, new merchant, laboring man, doctor, engineer, and overseer, and scores of other vital lines.

According to my belief every Indian in this country, including our leaders as well as poor, humble farmers and laborers, should devote a certain amount of time everyday to concentrate on the discussing of such items about our own conception of New India. Instead of backbiting and mudslinging we should encourage discussions of such things in our own minds, unless we can have healthy discussions, with friends we can get along with. For sixty days we shoul dhave (mon dharan) about discussing any one in unhealthy and unpleasant terms.

Whether it is J. J. and Anup, weather it is Abnashi and Saund, whether it is W. and S. This unhealthy gossip will disappear and daily turmoil will make room for the advantage of our enjoying healthy, democratic, freedom and education in this country. My bubbling enthusiasm sprouted out with such an emotional outburst this morning. Let someone like G.B.Lal, who declare (mon dharan) for sixty days and think over the matter. But my be you are right. The place for such thoughts is a waste basket.

Anup, before I finish this letter, may remind you of your promise to forward any business connections for me in India that you may happen to tumble into. It may not mean much to you but it is rather important for me.

Hoping to hear from you soon, I send my best regards.