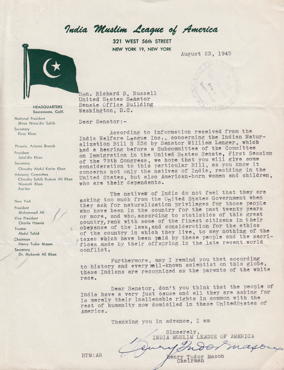 Letter from India Muslim League of America to Senator Richard B. Russell

DESCRIPTION
Letter from India Muslim League of America to Senator Richard B. Russell Senator (D-GA), chairman of the Senate Committee on Immigration urging consideration of S.236, a bill to permit all people from India residing in the United States to be naturalized. The letter became part of the committee's records regarding S.236. Signed by League Chairman Henry Tudor Mason, the letter references the India Welfare League, Inc., whose president Mubarek Ali Khan also served as secretary of the India Muslim League of America.