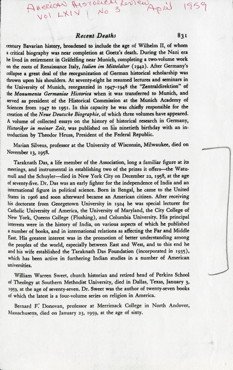 DESCRIPTION
Obituary for Taraknath Das published in the April 1959 issue of the American Historical Review.

Taraknath Das, a life member of the Association, long a familiar figure at its meetings, and instrumental in establishing two of the prizes it offers -- the Watumull and the Schuyler -- died in New York City on December 22, 1958, at the age of seventy-five. Dr. Das was an early fighter for the independence of India and an international figure in political science. Born in Bengal, he came to the United States in 1906 and soon afterward became an American citizen. After receiving his doctorate from Georgetown University in 1924 he was special lecturer for Catholic University of American, the University of Maryland, the City College of New York, Queens College (Flushing), and Columbia University. His principal interests were in the history of India, on various aspects of which he published a number of books, and in international relations as affecting the Far and Middle East. His greatest interest was in the promotion of better understanding among the peoples of the world, especially between East and West, and to this end he and his wife established the Taraknath Das Foundation (incorporated in 1935), which has been active in furthering Indian studies in a number of American universities.